earlier this week, we went to the pumpkin patch.
well, while we were there, we got something.
pumpkins.
i know, that was a hard one.
so for FHE this week we decided to decorate them.
(click on fhe if you don't know what that is!)
for some reason none of us were in the carving mood.
but we were all about the paint!
i decided on a classic. one of my all time favorite movies.
jake lives on the dark side so he chose a scary hitler pumpkin.
i know.
don't ask.
just nod.
miah and kora both entered their pumpkins in a contest at school.
each grade chose the best decorated pumpkin.
although miah's was awesome,
he didn't win.
some lame kindergarten parent made a freakin turkey pumpkin FOR their kid.
which of course won.
because the kids voted.
so. yea. that pissed me off.
but for kora's grade,
she won!
we saw a pumpkin decorated with buttons online
and i got the idea to do a mosaic spider.
i explained to her how to do it and she did all the work herself!
i was so proud.
izey made a mummy pumpkin.
or, that's what i assume it is.
and gus was smart and bought the
pre-decorated pumpkin.
his bedtime is at 6 anyway so he missed out.
oh darn.
that was sarcastic. 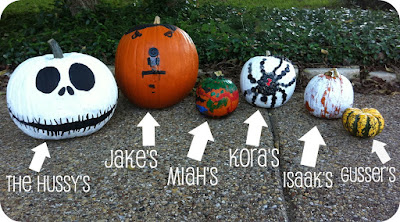 hope your hallowstinky weekend is spookilicious!
Posted by Jessica the Jacked LDS at 8:58 PM

could so tell Jake's was Hitler b4 I even read it. ;) Kora did SUCH a great job!!!!! Of course Hussy did too. That's what Jack is being for Halloween....because his name is Jack. lol I much prefer to paint pumkins too.

I love yours! One of the greatest movies!

Love it lol I love Halloween so muchos. :D

I wish I were talented.

Hitler is one scary dude.

Love all the pumpkins!

What a great idea!! Our pumpkins have been sitting on our bar all week and I've neglected to carve them. I don't think I'll have time with all of our running around this weekend so painting might be an option!

So creative! I'm a fan of Jack Skellington!

Me likey your Jack pumpkin!!

i love your tim burton pumpkin!!!

Oh I love your pumpkin! And what a great idea for the mosaic spider. Congrats Kora!

I LOVE the idea of painting instead of carving--I hate all the sticky seed goop! They turned out fabulous, of course!