jake was V.I.P. a few weeks ago and i forgot i had these pictures on my camera.
i'm about 100% positive that this dude is the cutest guy in the entire milky way.
and that OTHER dude in the cammies isn't too shabby either.
my favorite part about Lover are
the cutie little wrinkles by his eyes when he smiles.
when i was a little girl, there was a guy in our church,
bishop tenney.
he had those cutie wrinkles by his eyes.
and he had several pretty handsome sons who ALSO had those wrinkles by their eyes.
i was just a little girl, but i wasn't too young to recognize hotness even then.
i told my mom that i was in LOVE with one of his sons, kendal.
i thought Kendal looked like tom cruise so i called him kendal cruise.
he was about 10+ years older than me.
i told my mom that if i didn't marry kendal cruise,
i WAS gonna marry someone who had those wrinkles
that i love ever so much.
and,
i pretty much keep my promises. 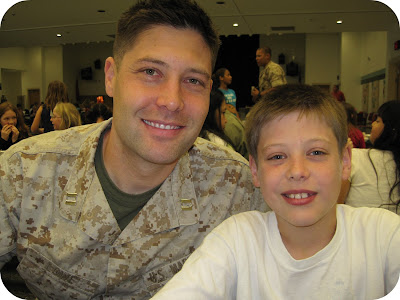 i think the combo of me and Lover

make my Jake even cuter than any kendal cruise could have done. 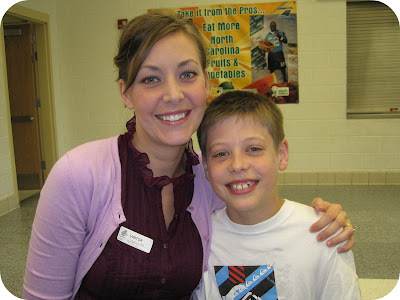 Um, are you wearing ruffles AND a cardigan?? Now I know why we're friends! Jake is quite handsome and pretty scary when you mess with his friends...

OMGEEEE!!!! I know him! Kendal Tenney!! Well I don't really know him but he's my totally HOT new anchor here in Vegas. Well he was until the stupid news quit him, or maybe he quit them, either way yeah he was TOTALLY a reason to watch the news.

So cute!The picture of father and son is top notch!

super cute pics of you and lover..and Jake is exactly what you said. cutie patootie..

yea why are little wrinkles by guys' eyes considered cute and makes them handsome, but not for women? so unfair..but i love that about guys too..haven't seen any roadkill yet..i'll be looking though..

jake looks like he's about to bust out of his shirt he's so proud to have you guys there. :)

I love that in the pic with Austin, Jake was smiling the "cool dude" smile and in his picture with you, he's smiling a "sweet giddy" smile. Love it. :)

Super cute blog; I love the family pic up top! So great!! So glad to know ya'! :P

I love your blog! It is very unique and original :).

i've always thought my jake was handsome. even when he looked like a baby frog. i love that guy :) HUG him for me will ya!?!?