Someone Beat Me to NieNie

I wasn't gonna post about this.
But now I have to.
Well I don't HAVE to. But I'm bummed now and I wanna tell you why.
Way back when on November 19th, my favorite blogger,
NIENIE
(have you heard of her?)
posted this letter on her bloggity schmog.
It's her oldest daughter, Claire's, letter to Santa.
I thought it was precious and I'm a sucker.
So when I saw that she was requesting, "an army out fit",
I had to step up.
I emailed sweet NieNie to ask if I could send it to her, given my MAD military hookups.
I also told her that she needed a MARINE "outift" instead.
Because let's face it.
We rule.
(Marine wives take an oath to say things like that.
No offense to my Army peeps, Justin, Charles, etc.) 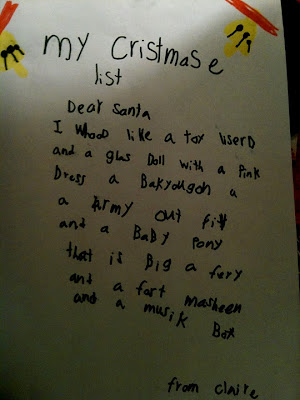 A few weeks had passed and no answer.
What did I expect. The woman probably gets about 500 million emails a day.
SOME people aren't equipped to handle that kinda email, like I am.
It's okay, I don't judge.

I took it upon myself to gather the "outift" together for Miss Claire.
I decided that since I wasn't sending something to EACH of her 4 kids, I'd make it be a baptism present instead of Christmas. I wrote that in the letter I sent with the goods.

Woodland Cammies
Nielson Name Tapes
Captain Rank (of course...in lieu of Lover)
A Black Martial Arts Belt
and
A REAL Marine "cover"
(as I'm supposed to call it, but really it means hat.)

I was so excited and proud at what I had done.
I know, I know...
toot toot toot my own horn.
Go ahead anonymous, think of something witty to say!
Like I said, I wasn't gonna even post this until the latest discovery. 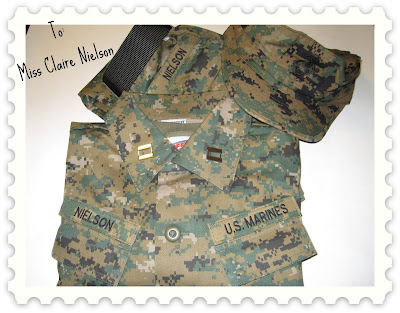 I mailed it off a tad late, but no worries, it wasn't for Christmas.

I get a Facebook message from Amber saying, "Go look at NieNie's BLOG!!!"
And so I do.

And what doth my eyes find?
Not only had someone BEAT me to the punch (some "G" character who better be family instead of just a psycho blogger fan like me so that I'm willing to forgive.)
But they freakin OUT DID ME.
My only positive,
mine are Marine cammies.
Boy,
Do I feel sheepish. 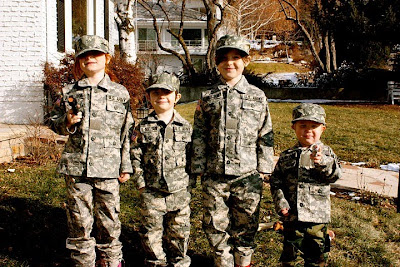 Does anyone know if there's a way to retrieve mail that has already been sent for the sake of embarrassment?
Yikes...

Gesh...your SO vapid! You should leave Nienie alone!!!!

No, but forReal yo.....I beat Claire will TOTALLY love the USMC cammie's WAY better then the army....

Your such an AWESOME person!

Oh, I almost want to cry for you. I don't think you should feel sheepish or embarrassed though. That was incredibly kind of you. And they are different. As soon as I started reading this, I knew where it was headed because I read nienie's blog already. I'm sorry, that stinks!

man! sorry:( But yours are different...and maybe they will make it on the blog also?! that was so kind of you. I have no idea how you do it ALL!

That is so sweet and I'm sure she'll still love it! I like the Marines way better too. lol.

mannnn you are truly an awesome person....and I am sorry those lame losers are crazy, stalkers and beat you to the punch! You still rock for being so sweet and giving!

p.s. I am still working on having NieNie email you...or comment on your blog!

Aww man! I HATE when that happens! I'm sure your super sweet present will be appreciated. I will write and tell NieNie how super awesome you are and to be sure to tell Claire how special she is to get such a wonderful present.

I gotta agree with Willis Party of 6. Sorry nothing witty from me.

Jess, that was SO SWEET and thoughtful of you! You are an amazing and selfless person! I wish I coulod be more that way! Kudos to you :)

Ohhh, that hurts my heart for you... she'll appreciate it anyway- and then maybe she will comment on your blog :)

That sucks, but it doesn't do anything to change how nice what YOU did was. I don't think you should be embarrassed either. You did a great thing, and she's going to really appreciate it.

AWK.WARD.... oh well... that's what you get for being so excited and "look at how great i am" (not really) HAHAHA i love anonymous' comment. they must have SOME sense of humor. right? right? ahhh *tear* :)