Okay, so here's the overview!!
As usual, Christmas Eve night, all the kids were able to open ONE present which I designate.
It's always something sleep related that they wear that night. 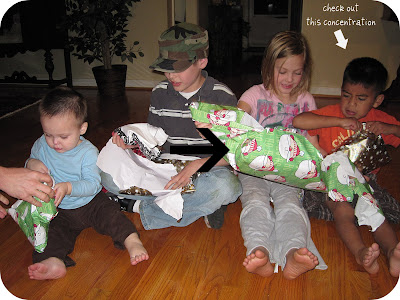 PJ's this year! I love footie pj's. SOME people don't share my love for them, BUT if I could get Jakob to wear them, I would.
Maybe even my Lover too. 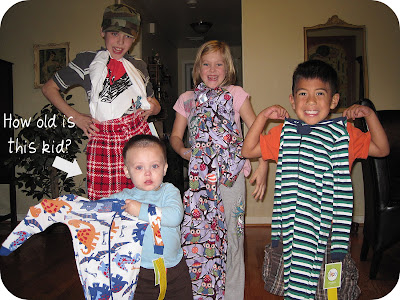 After the opening, Isaak went to bed. He's an early bed timer, 6pm.
And I look forward to that time!
With the Tasmanian devil out of our hair,
I let the kids decorate a gingerbread Christmas tree I bought. 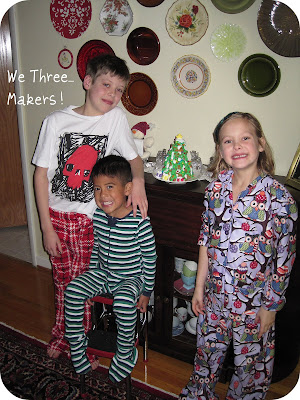 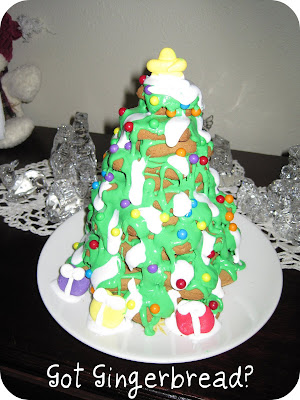 And then if was OFF to bed with the little people so Santa could come.
The heathens wrote him a letter as they always do and left him goodies.
They wanted to show him our family picture too. 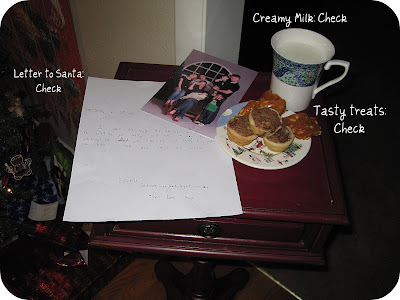 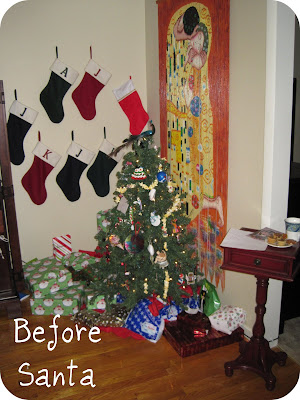 And with the magic of still frames,
I was able to capture Santa's loot just SECONDS after he left.
PS...Santa's hot. I grabbed his butt. 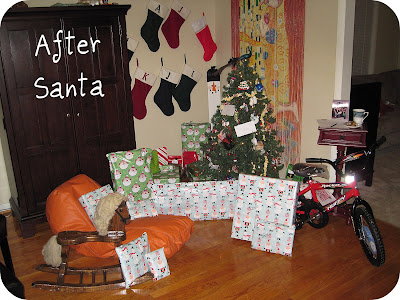 But he didn't leave before completing his mission! 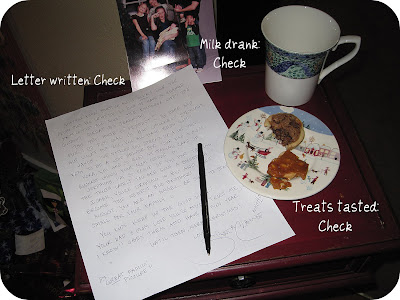 An sure enough, at the butt crack of dawn, the madness began!
Actually no.
It's not madness at our house.
I'm one of those annoying moms who makes all her kids take turns opening EACH present so I can be sure to see their reaction.
They love it.
Not.

And after a MONTH of being spanked or slapped on the hand every time he touched a present, Penny was finally able to open one.
But he didn't really know how to do it without getting in trouble.
He liked the candy in his stocking the best and after two presents he was pretty much done with all that nonsense. 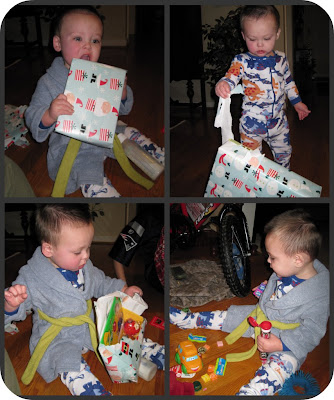 My FaVoRiTe gifts of the day were:
Isaak's robe.
It was free. I re-gifted it to him. 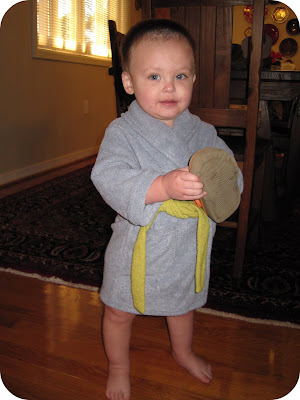 The boots for all rats.
The last time all the rats got boots they wore the CRAP outta them for TWO YEARS.
Moms like articles of clothing that last for two years.
Even if they DO cost a freakin FORTUNE.
Yeehaw. 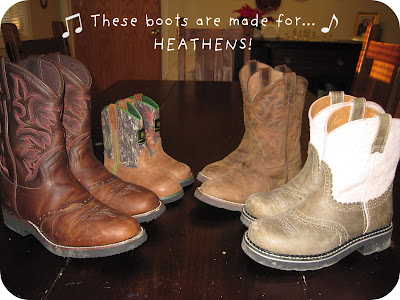 The kids' favorite gifts were: 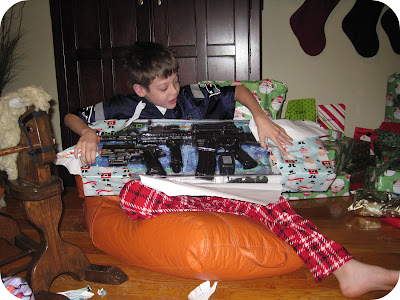 For the rest of the weekend, the kids spent their time being heathens and reeking havoc in the neighborhood with their guns.
Are we rowdy or what? 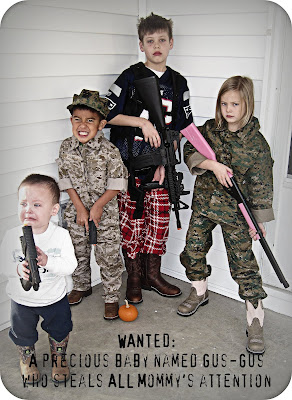 As seen above, Izey wasn't feeling too great.
He got an ear infection on Thursday and has been whiny and sad since then.
He spent the rest of the week laying in bed and eating con-corn (popcorn) with Mom and Dad.
In this picture, Austin is covering his face because he thinks if he can't see you, you can't see him.
He learned it from Penny. 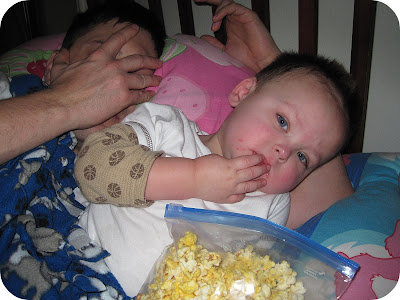 And where was Gus this entire Christmas holiday u might ask?
Where he always is.
On the couch.
Watching the madness from afar. 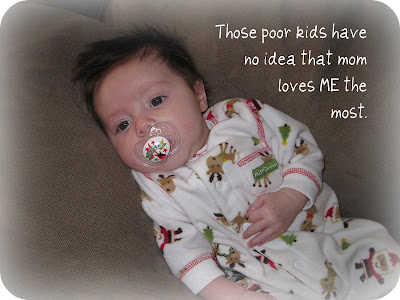 Thanks to all our family who sent fun presents our way! 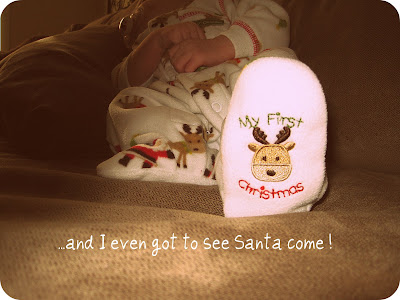 Merry Christmas to all and to all a good 2010!
Wanna win a FREE bottle of Skin MD Natural?
Go HERE
Posted by Jessica the Jacked LDS at 8:54 AM

Looks like such a wonderful and fun Christmas!
Enjoy the New Year :)

Your humor mixed in always gives me a nice little giggle, I'm so glad you all had such a great Christmas.

Such fun to be had! I think your Christmas card pic for next year ought to be the one of them in their cammies with guns, that's the best!

I'm really not sure how you had such a great Christmas withOUT me around?!?! Don't worry, I am also that mom that makes everyone open presents one at a time. It makes it last longer! And I also like to see their faces.

love those boots:) thanks for another entertaining post:) Hope Izey is well soon!

What words... super, a brilliant phrase

Sweet boots! So, I'm totally with you on the footed jamies! I love them! Actually, my boys opened pj's this Christmas eve also. Braylen loves his jammies..he used to complain about the footed jammies until I convinced him that they help him run faster. Now, we call them his "running jammies" and he wants to wear a pair every night!! LOL!

I'm in love w/ that lil izzy man! That rob is freakin awesome..he is such a stud..and i still laugh so hard when i see the pics w/ all your kids holding guns esp izzy!

I also make everyone take their turn opening a gift! You gotta! It's the BEST part about giving a gift.............watching the reaction :) I love your heathens in their cammies and guns, they match mine! :) Prolly why they all get along so well!

(I have to agree- I LOVE taking turns instead of letting everyone RIP into everything all at once- I think you can see the reaction better, too, and it kinda helps you learn gratitude- we had to say thank you before moving on to the next one!)

Your chitlins are so dang cute in the PJs and boots! You did good :)

it looks like izey's gonna commit suicide in that picture... poor ear infection-ed guy. and i love the boots and guns... could these children BEEE more texan? i think not. well done. HAH oh.. ahd i wanna squeeze gus.

ps. lucas goes to bed at 6 also.. he's BEAT when it roles around because he's such a little bouncy ball as i KNOW izey is.

So, when does Christmas dome down in your house? I think you should take the trash bag to it!