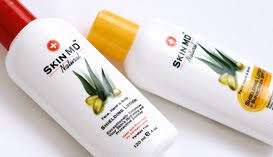 This week's featured vendor is one I'm SUPER excited about.
Not only because the product is amazing, but because it applies to my life directly.

is our lovely vendor and they are donating a full size bottle of their shielding lotion
(aka miracle moisturizer as I like to call it!)
to
ONE
lucky winner.

It could be you.
You never know.

So lemme tell you about this product okay?
As most of you may (or may not) know, my Penny guy has some SERIOUS skin issues. He has been diagnosed with psoriasis in some spots on his back and head and then other spots have been diagnosed as eczema.

We are CONSTANTLY in a losing battle with his skin. It doesn't help that we live in probably one of the MOST humid states in the US either.

To keep his patches in DECENT shape, I usually have to apply a topical medicine, that contains a small amount of steroid in it, EVERY SINGLE DAY.
I hate that.
I hate the fact that he has to use it, but without it, his patches go CrAzY.
The doctor has told us to keep hydrocortisone on it to lessen the use of the steroid, but seriously...who wants to be all greasy and slippery all day? That stuff is disgusting.
ALLLLL lotions and moisturizers I've tried do nothing but accelerate the amount of steroid I have to apply. They seem to make the problem WORSE.

Most mornings my Penny wakes up with bleeding patches of skin in his hair or back or shoulders. It's really sad :(
I hate itching. Can you imagine itching ALLLL NIIIGHT LOOONG?
The more he itches,
the more I have to use the steroid to calm the skin down.

UNTIL,
Amber from Skin MD Natural emailed me with her suggestion of a give-uh-way.
She even sent ME a free FULL size bottle for Mr. Isaak to try out after she found out that he suffers from eczema and psoriasis.
I wanted to give the stuff a TRUE evaluation for my readers so I decided to test the product on Izey Ro for 2 weeks.

I followed the instructions applying the lotion every 2-8 hours for a few days until I could see an improvement in the skin's moisture level.
I used it all over his body, including his face.

Every diaper change, we lathered up.
After the first week I started to see small changes.
Penny was itching less
and less
and less.
Which meant that his breakouts weren't bleeding anymore.
Which means that I didn't have to use the steroid as often.
I liked that.
By the end of the second week, I could see a HUGE difference just by LOOKING at his skin.
Now don't get me wrong.
It didn't CURE the psoriasis or eczema, but it doesn't claim to.
Nothing can.
But it DOES HELP the issue.
A LOT.
Enough to make me want gallons and gallons of this junk.
I wanna put it in his bottle and have him DRINK the yummy skin goodness.
*hint hint*
No just kidding.
But for real.
It's good stuff.
And I won't lie.
Penny started to notice the miracle of this stuff too.
He even pointed at the bottle one day and mumbled something like, "clabbal" one time after I changed his diaper.
Translation:
"Mom, don't forget my Skin MD Natural. That stuff is AMAZING. The way it makes me feel is supreme!!"
No joke.

SOOOOo,
enter to win YOUR bottle.

Comment here telling me why YOU wanna try Skin MD Natural.
That's it!
Plain and simple on this one.
DO IT.
OH
And as always.
1 comment from NieNie = YOU WIN
FYI, I am NOT being paid for this advertisement.
Just having a happy Penny is payment enough :)
Contest ends Thursday at 5pm EST.
Winner announced Friday morning.
Posted by Jessica the Jacked LDS at 7:03 PM

I want to win it because my poor Kafra who has asthma and also can't eat dairy has excema too. I would love to use this yummy goo on her.

Hmmm I wonder what that erased comment was? Anyhow I want this to rub on my Lover who has sensitive skin, not nearly as bad as Kafra but he itches something terrible in the winter.

I forgot to mention that this is the only non-baby item so far, and my baby is seven-so this is something we could actually use! Plus, think of her cute freckles.

I would love to win this product because my older son who is three has always had very sensitive and dry skin and always has blotchy dry patches that pretty much nothing has ever seemed to help. :(

I would like to try this product because I am really bad about putting on moisturizer! (and buying it!) So maybe if I get some for FREE, then I will get good at putting it on and I will have to buy some!

That hurts my heart that my baby Izey has that. Bless his heart. Im so glad you found this stuff. I just wanna come and hug him.
Mutha or to Izey that would be Mawmaw:(

I've never heard of this miracle cream but I too have skin issues and would love to try it on myself!

Brim over I assent to but I dream the collection should secure more info then it has.

Because I ITCH like crazy during the winter...drives me insane. Poor Penny, though. Maybe you should just give it away to him. That makes me sad :( So, if you draw my name, I'm donating it to him and his beautiful, patch skin. I'm so glad it helps him!

I would use this cream for Isabel. As you KNOW, her feet are HORRIBLE!!!!! If I don't win it, you will find YOUR freebie cream missing from your house! And that IS a threat!!!!!!

I want 2 bottles! (I wish) I know 2 people I would give it to who deal with all this stuff. One SUPERLY WAY COOL boy in Jade's class has excema SOOOOO bad, worse than anyone I have ever met, like ALLL over his body, face, hands, arms, etc. They have traveled to so many specialist and doctors. Cory looks kind of ugly because of it, but he has the coolest personality. I would give a bottle to him to try, and then if it helps him, maybe his parents would buy gallons of it.
I also have one of my dearest and oldest friends who suffers from psoriasis arthritis, she is a working mom of three, AMAZING woman who deals with more drama in her life than I can imagine, and is AMAZINGLY and completely unreal in her strength. I would give a bottle to her too. She has to deal with all the ointment, injections, etc crap and she is only my age.
So even though I deal with itchy dry skin and my kids do too, it's nothing compared to what these two awesome people I know deal with. If I win the give away, maybe she will change the size and give me 2 half bottles to give to my 2 friends to try? (or maybe I can work out a trade with her? This is motivating me to get my little creations to you asap for your give away) ;)

I want this!!! This is why. A really good (not just Sunday good. not just regular good. take off their shirts and give them away good. do anything you ask them to good.) family in my ward has a daughter who suffers from what I think is eczema or psoriasis. This family doesn't have insurance so they haven't been able to get her properly diagnosed. The mom told me that they make her sleep in their bed with them so they can take turns watching her throughout the night to keep her from scratching. The other day I noticed she was at church with bandages wrapped around her arms and legs. They were trying to cover it up with long sleeves and tights but I saw them peeking out. The mom doesn't complain. She doesn't want a pity party. She doesn't even ask for help. If this cream can help Izey then maybe it could help Amber? If I don't win I just need to buy some for them anyway, its the least I could do.

Aww...poor baby! That is so sad and frustrating for you I'm sure. I'm lucky that we do not have to deal with anything like that so I hope that someone who does have similar issues can get some of this goodness in a bottle!

hmmmm....is this product sold in stores?? my youngest son has eczema and we have tried everything under the sun, to the point where he doesn't want me to put anything on it anymore.....so if this stuff really works as good as you say....please please please let us give it a try!!!!! ;)

This is the first give-away of yours that has absolutely made me crazy with desire. When we went to Utah over Christmas both of my girls broke out with eczema from their butts down. Kat got it on her face as well. Georgia looked like she had a horrible scaley sunburn all over her legs. As a parent you hate to see your kids miserable and it makes you pretty much willing to try anything to make them feel better.

By the way Jessica, I miss you and Amber. One of these days when things calm down we need to get together

PS... They offer free samples on their website too!

I too have someone who has some ecezma and have tried different things both from drs and otc to no avail. Since Jessica gave such a good testimonial I thought I would give it a try. I'm not trying to win it as I have already purchased some from a website hocks.com. They are cheaper and less expensive on their shipping so for all the people who don't win and want some go there to buy it.

Ok. I have psoriasis REALLY bad on my scalp to where I wake up with blood on my pillow and I know how it feels to ITCH all nite long. I get break outs on my elbows and knees and yes, it is HORRIBLE! I would love some of this. Win or not... its a most. I have used tea tree oil, lavendar, tar, etc... I need something that WILL work.

Oh...And I thought I had bad skin condition...I totally think Queen Mama needs this.
I have bad exezma, But I can at least cover it up with shirts or pants. I am on a topical steriod right now...but would love to get off of it. The more natural the better. Even if I don't win I will have to see about ordering a bottle for myself. Thanks for the giveaways!

i've got awful dry skin and I want to try a new product that will help my poor dry skin. :( L.A

I would love to try it. Both of my girls have eczema, and it sucks big time!

As a mom of three with psoriatic arthritis, I have psoriasis all over my dang scalp! It is SOOOO annoying and I've only found one prescription medication that works, but it's like $200 for a .5 ounce bottle. Anyway, would love to try this!!

I wanna try it because I have dry skin, too! I know it's not eczema or psoriasis, but it is annoying!

Ummm, today is Friday and it's almost over. Just a reminder!