First of all, I have to ask...
Where the crap did October go and where was I when it was going??
I'm so sad that it's officially Nov. 1st already.
Oh well. I think it has something to do with that child I spawned and the drugs they gave me afterwards. Speaking of which, I have an upcoming post dedicated to unanswered questions and junk from the past few weeks which will be here...oh tomorrow possibly. If you HAVE any questions you want answered, now's your chance to ask them so the answer will show up soon. If you've already asked, then no need to again. I gotcha covered! *wink*
Okay so Halloween was so fun on base. The night before we went to the school's trunk or treat and that's actually the night the kids dressed up all the way full blown.
Kora decided on a pirate girl which I scrambled to throw together the day OF the party. Thank to my SS, the black duct tape did the trick on an old red shirt of my Lover's turned inside out. Add a few accessories...and VOILA! Pirate GIRL...BAM.
Miah was the only one who got to choose a bought costume. With all the baby momma drama I was brewing in October, I told the kids to get creative with their costumes cause I wasn't buying anything for anyone. Then I back peddled and told Miah I WOULD buy his since I bought the bigger kids' costumes when they were little like him. So he chose Wolverine. Only problem was we bought the costume tooooooo early. SO early, in fact, that he wore it OUT and lost the mask, so he had a Miah head on a Wolverine body.
Now, I'm such a LAME MOM that I didn't even get a picture of Jake fully decked out. He had a football practice the trunk or treat night and then on Halloween I was so scrambling to get everyone ready that pictures blew my mind.
Oh well.
He was a mix of Jason, Michael Jackson, a Skeleton, and yeah. Just a bunch of our costume pieces thrown together. It worked. 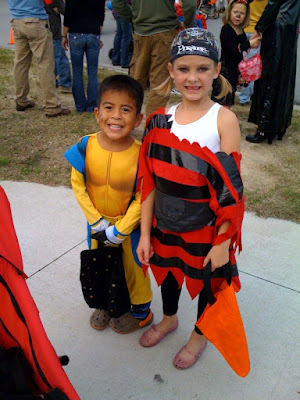 And now...for the GRAND FINALE!!!!
Let me introduce to you the most fantastical costume EVER contrived!
NACHOOOOOOOOOO LIBRE!
(Aren't those eyebrows so Jack Black? He's dead on this character.) 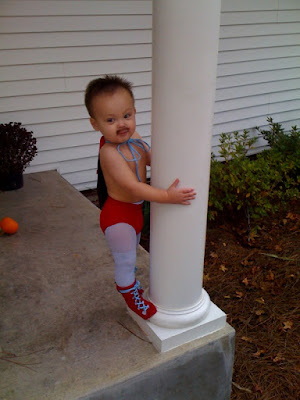 At the trunk or treat people were going crazy over this little man. People who didn't even know us were taking his picture. Crazy thing, on Halloween NIGHT, someone saw him and said, "Oh I saw a picture of you from the trunk or treat." WHAT?! Austin said in a few weeks you'll be able to google Nacho Libre and pictures of Penny will pop up. Give it a try. 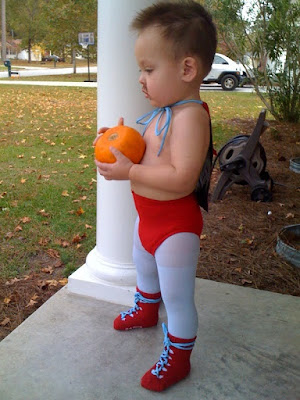 A little squatting Nacho action. He played this part to a T and thankfully, the weather was PERFECT for him to go topless. It was warm warm warm...even when it got dark!
The costume was super easy for me to make.
I just took some plain white tights and dyed them light blue, red tights and cut the legs off, and then red tube socks and cut holes in them to lace them up with light blue laces. The cape was the leftover leggies I cut from the red tights and the little 'stache....eyeliner :)
Isn't he hot? 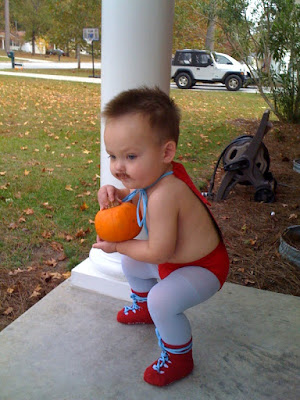 On Halloween night we went around with the Kehrs and then met back at our place to dump and trade candies. I am thoroughly disappointed in my kids trading skilz though...where did all the wonka candy go?!?! Nerds? Runts? Laffy Taffy?? Come on kids!!! You know what mom loves. Hook a mutha up! 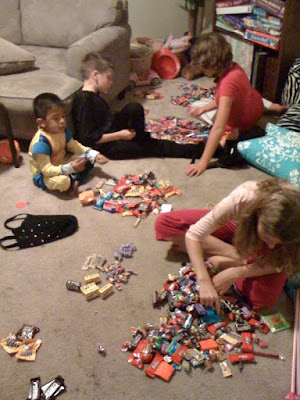 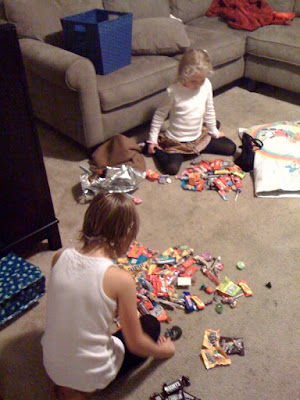 Great night all in all. We saw lots of friends in the neighborhood and crashed Gia's house party bonfire for some water and good convo. Loved Loved Loved having the Kehrs with us and LOVED having them over afterwards to laugh and chat!
LOOOOVE my little base neighborhood!!
Posted by Jessica the Jacked LDS at 6:28 PM

I am so overwhelmed by Penny's costume, I am almost speechless. He looks EXACTLY (well, the baby version) like Nacho Libre! You did amazing! :D

I will so be googling penny as Nacho Libre in a month! You did such an awesome job. Pretty soon I'll be hunting you up to help with costumes! I like the other costumes too. :)

Penny as Nacho Libre is PERFECTO! I love it! I'm totally googling it in a month, I'm sure he will pop up! Kora looks awesome as a Pirate girl. I am so impressed with your creativity.

i can't stop laughing at Penny's costume...that is greatness!

So since you posted today and I forgot to ask you earlier...dare I challenge you to NaBloPoMo (National blog posting month...www.nablopomo.com). The challenge is to post a blog every day for the month of November. I did it fully last year. This year since my life is not so exciting, I am really going to try to do all 30 days, but I am at least going to do 5 days a week. So I hope you're in but completely understand if you aren't. I mean, I don't think you have anything better to do...it's not like you have a newborn or 20 other kids.

I didn't even see the movie but I LOVE Penny's costume, great job! I had almost forgotten about the trading candy days, too funny. And I'm worse about taking pictures. I didn't take a single one. Thankfully family and friends did so I can mooch off of them. I am halloweened out.

"You made me look like a Fool" ~Nacho
OK OK OK...I am NOTTT lying when I say Izzy has the BEST costume of the year!!! He's got my vote! Ok and no other baby could pull that off better then him...I love the photos you got of him too PERFECT! And your other babies look ADORABLE too!! Mannn there is nothing better then coming home from Trick or Treating and trading candy!!!
"Isss the Best" ~Nacho!

That was a fun night! Glad you guys came over! The kids were ADORABLE and I'm still LOL at Penny's costume! HILARIOUS!!!

I about died when I saw Penny's costume. It's FANTABULOUS!!!!!! Love love love it!

Laughing soooooo hard at Penny's costume. AMAZING! I loved it. That was ADORABLE! Kora looked amazing! Miah didn't need a mask, mine didn't wear his either. Lol.

Wow Penny's costume ROCKS! The moustache is priceless and I just love those little tights. :) What a cutie! L.A.

Was his other costume,...uh, stinky? Love that little nacho working his tights and doing his squats. I just couldn't get into halloween this year after the kids refused to be the village people. Poopheads.

YES YES YES....absolutely the BEST costume ever!!!! i've been showing it to everyone in my fam and they are all cracking up. he really does have the perfect eyebrows, face, hair, figure, diaper to pull off the whole costume. :) kora looks adorable too. the head scarf looks a little familiar. ;) great job mom!!!

at least you're aware that it's nov. i went straight from feb 2 to april.

I could quote from Nacho all night. It's the best! I love it!

Izey is beyond adorable. I was wondering where you got his costumer. I should have known you'd use your rad, creative brain to think of it yourself. I'm still impressed about the ratchet...

I can't remember what I was going to say? Brain fart, sorry!