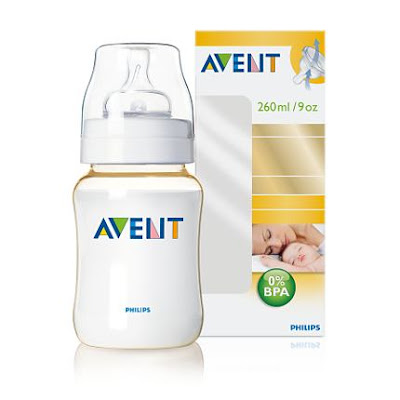 I bought about 16-20 of these bottles before I had Isaak and they've done us good over the past year. A little leaky around the nipple at times, but nothing TOO bad. I recently bought about 6 more before August arrived and they are the new honey colored BPA free Avent bottles. Ever since I started using them I've been cussing Avent's name because they leak,

It's seriously annoying that I spend $5 for a SINGLE bottle that freakin LEAKS. I finally had enough today when I was trying to do a million other things while feeding Gus so I propped up his bottle with some blankies on the couch and walked away to get the kids out the door for school.

Only to come back to him about 3 minutes later (because he was making all these crazy gurgling noises) to find him literally DROWNING in formula because the stupid bottle was leaking AGAIN.

I decided enough is enough so I called Avent to complain. The lady on the phone was super short with me, kept cutting me off when I asked if they have been having LOTS of complaints about these bottles and then got my information to send me 4 replacement bottles. 4 is their max but once I get the 4, I can mail in all my others with their self addressed labels and get ALL of them replaced.

I'm thankful that Avent is paying attention to this problem and reconciling it BUT I'm annoyed that I spent over $100 in Avent products and I'm not entitled to a polite and courteous customer representative when I call to report a problem. I think that's the least of what I deserve, right?

If YOU'RE having problems with your Avent bottles, call this number to speak to an Avent customer service representative.

or use THIS link to send an email.

I'm sure they'd LOVE to hear from you :)

Posted by Jessica the Jacked LDS at 9:12 AM

I've heard this from ALL my friends that have used Avent bottles...so nope, you're not the first.

I know you're not wanting to have to shell out more mula on bottles, but I LOVE Born Free bottles. No problems whatsoever.

Yep. Same thing happened to me!! Do you remember me asking you about it at Lindsay's shower? And, another mom that used them said the same thing. I FINALLY found out how to make them quit leaking...if you press the nipple in before you shake it, and listen to the suction as you press the nipple in, there's a different sound when it's gonna leak and when it isn't...I think it has to do w/ how the tops are screwed on. b/c when I hear the 'leaky' sound (the air sounds like it's swishing through as opposed to blowing in something that is more air tight) if i redo the screw job, i can usually make it work. Sorry, the sound is hard to explain, but you'll hear a difference eventually! haha!!

I ended up leaving AVENT for Playtex. I LOVED LOVED the Drop in Liners and NO LEAKS!!!!

We loved our First years Soothie Bottles (they are shaped the same as the pacifiers they give you at the hospital...which my son loved)! hope the next kiddo loves them too! No leaking at all from them.

Oh no! I left them a nasty gram. I can't believe that she was so rude, ugh. And with all that mess it created, I probably would have been rude.

I agree with "The Nugens" the soothies are so much better.

Yeah...bad, bad, bad. Had them with my first and it was plain awful with my first. I switched to the born free brand for my second and LOVE, LOVE, LOVE those. A few extra pieces to wash but sooooo worth it. Never a leak and it's been 14 months. Sorry about the customer service lady. They must hate their job...

That's EXACTLY why I didn't buy those bottles in the first place. I am telling you: DR.BROWN BOTTLES ROCK!!! I LOVE them. Never leak, and a ton less spit up and gas...and I can say this because I saw a decrease in my kid's reflux after switching to these bottles. And they are no more expensive than the Avent bottles.

Those bottles, I used them for both boys, drove me mad. I don't know why I'm just thinking now that I could have tried different bottles. They seriously drenched my boys so many times and it was f-ing insane!!!

Avent bottles stink.. They do leak something awful.. my doctor told me about dr. brown.. those bottles rock... never had a problem.

like you need one more thing to stress you when you have a newborn! That sucks! Sounds like you should switch from all the comments and write advent a letter about how you wasted all your money on their HORRID bottles!

Go get 'em! If it's not a boob that's leaking, it's the freakin' bottle....annoying! Too bad there is no booby leaking hotline.

Hope the new bottles are working good for you! Even if they are a pain to clean.

Playtex with Drop in liners are THE BEST. The nipples are also THE BEST. I've never used Advent, but hear they leak.