So some of you may already know about this guy they call "radio man". I personally like to call him "karate guy" but whatever. He's famous in Jacksonville because he stands at one main intersection and does karate poses and kicks over and over as if he's in his own little bubble of karate mecca. He really gets into it, it's quite fun to watch.
Sometimes, if you're lucky he'll have his big boom box with him which he also has tatoo'd on his back. When Kora and I saw the 20 year old thumb sucker in the mall, we ALSO saw radio man walkin around with his boom box on his shoulder and he was singing loud enough for the entire mall to hear.
This is an interesting little town we live in, huh?
Anywho, radio man walks all over the city. I don't think he owns a car, he just walks everywhere with him arms bowed out as if his lats were as big as freakin tree trunks.
I saw him on the way to my OB appointment the other day and since I was kidless, I decided to pull over and ask Radio Man if he wouldn't mind me taking a picture of him. I mean, if he decided to murder me, at least it would ONLY be me and not my heathens inside the car.
Fool proof plan.
He obliged to the request.
And then he posed for me. 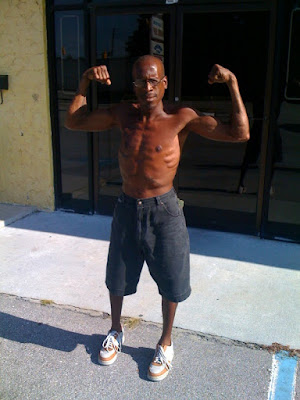 And then I asked him to do a karate pose as well.
Again, he obliged. 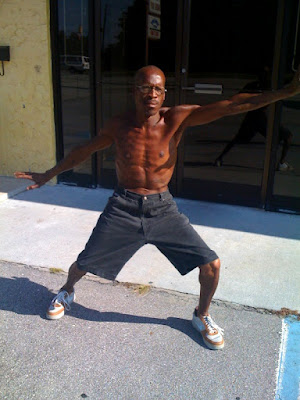 Thank you Radio Man for making me smile that day.
AND
Every OTHER day I see you strutin your stuff at the intersection.
If only I had your confidence.
Posted by Jessica the Jacked LDS at 5:35 PM

Haha... I remember seeing him all the time!

Awww no picture of the tat on his back? The most interesting thing on the street in Vegas is the homeless people. Why do you always get to live in the good places?

I need a picture with you and him together. He's got pretty muscular arms for how skinny he is--you can see all his ribs. Maybe i should start doing karate...

karate guy looks tame compared to some of the street walkers (both kinds...) in Memphis!

Radio is a real sweet guy...I know a few of his cousins!

Dude, he looks emaciated! Did you happen to throw him a big mac for his services? He needs a good meal!

YES. i'm glad someone FINALLY had the courage to talk to him. did you ask him what his story was? i wanna know more about him.

It seems in all the fun neighborhoods there is a character like that. In college station there was an old man that would hang from the street post and stuff, and up the street from our current residence there is a guy that likes to dance some crazy moves. Sara always asks what he is doing- I tell her he didn't get enough attention as a child.:)

u r brave. i would be too scared to ask. i too saw the pole guy in College Station doing his tricks. The man was OLD...i have NO clue how he could do it at that age! I tried it (on a secluded pole) and it's not as easy as he made it look! :)

How did I miss the College Station guy? Maybe I'm too old.

Jessica, I think Rockwall needs something like him. How about you move back here and BE the street show. That would be so cool.

What's funny, he is a retired marine. He has plenty of money! He just chooses to EXERCISE! Crazy! He walks EVERYWHERE! We love seeing him! Hey hey RADIO! And he even has his own YOUTUBE videos that people have made of him :)

def. you need to do a documantary on him. hahahah he is the coolest. We don't have very many weirdos in st.george..unlesss you count the creepy poligs!

This guy cracks me up! Did you talk to him? Just curious as to what his story is. My kids ask me about him every time we see him.

Tommy calls him the Jacksonville Ninja, but says he is not a real ninja because he doesn't wear all black :)

We see him allllll the time too and my kids crack up while I'm yelling at them thru tightly gritted teeth to STOP STARING, LAUGHING and POINTING!!!!!!!! I'm from Chgo and any eye contact could mean death. You are one ballsy chick! Guess Rockwall doesn't have a "South Side" HOLLA!!!!!!!!!!!!!

Oh my gosh, I cracked up when I read this because I used to see this huge black dude all the time walking around all flexed with his arms out. He was the smiliest guy and he would always wave at us when we drove by. Some people are just exhibitionists.