Let's Buckle DOWN in here!!

I have finally reached the point of all exhaustion. I can't take it anymore. I can't handle having such a chaotic house. It's driving me INSANE. I feel like there are no rules, no consequences, NOTHING to keep these "troops" in order.
I broke down under pressure and decided it was time for me to bust out my creative skilz and make a NEW discipline board for the kids.
I've been synonymous for always having great chore boards. I used to LOVE being creative and thinking of fun new ways for the kids to be trained and molded. Ever since leaving Fort Worth (where my last chore board was ruined in the torrential floods), I've let my family go and it is SHOWING. When this happens, all hell breaks loose and it's everyone for themselves which is NOT pretty my friends.
Lately I've been struggling with Miah SO MUCH. For some reason, this age is not working well with him. He has a SEVERE lying problem...oh my word. Like he would lie TO THE DEATH. It drives me crazy. I don't understand how a kid can't comprehend that if you LIE, you will get in ten TIMES more trouble...doesn't he see that? Today when he lied about spraying my blush brush with Resolve, I had a meltdown. Like a major meltdown. He wouldn't admit to the crime even though he was the ONLY ONE IN THE HOUSE THAT COULD DO IT. Hello Miah...I'm not a freakin idiot...do you think I am?
I did something. But only because I heard about someone else doing it just the other day (MA and SS - there I sold you out). I wanted him to tell me the truth SO BAD that I stuck him in the shower...fully clothed mind you...and turned it on....COLD...FREEZING cold. I let him be sprayed, DRENCHED until he admitted it and even STILL, he wouldn't say what he did until I TOLD him what he did. THEN he said yes. But just ten seconds after that, I asked him again, who did this Miah? And his answer? Somebody. UGH. Back to the lying!!!!!!!!
I had him change clothes, dry off, get dressed...
and take a nap.
I needed to be away from that situation. I remember my Aunt MoMo once said to me when I had baby Jake, "You can shake the CRIB, but don't shake the baby." I've since loved this quote and have stuck by it because heavens knows we have all needed to shake our children's CRIBS every once in awhile. Spraying the water was the only crib I could shake at the time.
Now, I know you're all thinking I'm a crazy insane mother.
And yes, it's true. I am. But at least I admit it. Would you?
Given that instance and many more previous instances involving ALL of the kids at many different times. I decided it was time to RE-enforce the discipline board.
Here it is...
in all it's glory.
Let me tell you how it works.
Each child has their own "lane" to earn gold coins, or get strikes. Strikes are bad. Coins are good. Each time you break ANY of the rules seen below, you get a strike. Three strikes in one day? You're out...no gold coin for that day. If you happen to make it through the day without striking out, you get a coin. After 14 gold coins - you get to go to Barnes and Noble and pick a book. Simple. Easy. Fun. Rewarding!
(the coins and little baseball bats (which are the strikes) shown are only for explanation purposes, really we haven't started...the board is empty) 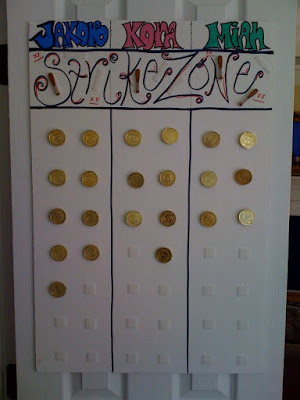 Now here are the rules. My favorite is #1 which overrides ALL the rules and means I can make up or add to the rules anytime I feel like it. Love that about being the mom, don't you?
Now don't get me wrong.
Just because you get a strike from breaking a rule, doesn't mean you can't be punished in any other way as well. Groundings from outside, playing with friends, spanks (and not the kind that make you look skinny), Friday night movie night, or timeouts can also accompany a strike. 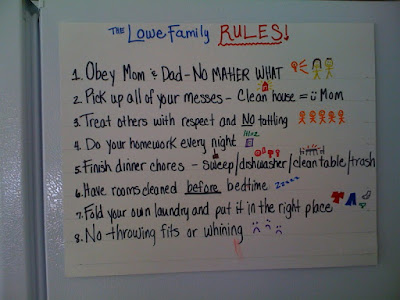 The kids are excited to fill up their lanes and I'm happy because I at least have something to go by. Some type of structure. We needed that. I needed that. We spent our most recent FHE going over the rules and the discipline board to make sure we were all on the same wave length. I just finished the board today and guess what?
It starts...tomorrow!
YEEE HAW!
BRING IT you heathens of mine....BRING IT!
Posted by Jessica the Jacked LDS at 3:42 PM

I love it.. everything about it. I may steal it.

Hi, So I'm your newest blog stalker and this one I just had to comment on. I love it! What I love the most is how honest you are and frankly my dear I can completely 100% relate. That point when you just feel like everything is completely out of control. I've been there and it's so encouraging to know that I'm not the only one. Good luck with the chart, I think I may have to swipe the idea.

It's weird that lying threw you over the edge and yet there is no "telling the truth no matter what."

I guess Miah still gets to lie as long as he sweeps. Interesting.

It's a cute board, though. Very creative.

Bonnie, I was thinking the same thing! Where is lying on the board?

Love the board. I want one for my husband. We don't have enough kids and Madelyn's not old enough for us to push all our chores on yet.

It just hit me. That's why you and Amber and Bonnie have so many freaking kids! NO more chores.

Have you tried soap? When George screams she gets the screams washed out with soap. Maybe he needs the lying washed out? Cute board, I hope for your sanity's sake it works!

huummmm...lying.....I wonder where he learned that one? Sorry I had to say it:) LOL!

I hope the chart works wonders! Let us know:)

Miah just needs to be kidnapped by me, so he can get a nice warm shower and all the candy he wants:)

As I told you before, I really think I'm stealing your idea....but unlike someone stealing my idea's, I totally give you credit in advance for it;)

I'm really glad you threw Miah in the cold shower. That sounds like something I would definitely do. I'm seriously struggling right now trying to maintain order and control with an almost 2-year-old and it's SO HARD! I just wish he'd understand the logic of a chore board or consequences like time out and no dessert. Unfortunately, he's not quite there yet. Ah...and so the patience is primed... Good luck disciplining your own little monsters!

Love your incentive chart. Your road kill post made me throw up a little bit in my mouth....now take me out of time out. :)

Poor Miah! LOL. I admire your honesty, Jess, that takes cojones. I used to have a chore chart, and stopped using it for some reason. I need to get back to it because my kids don't listen to their dad. They obey me ok, but they totally ignore Jerad, and it's a big pain in the butt. I think the chart would help Jerad as much as them.

On your reward board: 1: I guess Isaak does NO wrong or is in trouble all the time and doesn't have a chance to earn any rewards so, why bother putting him on the board
On Miah: You M.T. (Mother Terrorist) If you had listened real close you would have heard him give you his RANK, and SERIAL NUMBER which is all he is supposed to give you according to the GC rule book - Have LOVERBOY look it up and show it to you !!!!

I am so glad you admit being a crazy mother. I never admit it; then I just get crazier.

I wish I had your guts. (Not the guts on your horrific roadkill post. I'm still trembling.)

I love your chart! My kids need these rules.