One of my favorite things about my lover is that when he explains things to me, he speaks as if I'm educated or something. Well, I'm not. So I usually have to ask him to RE-explain it...and then RE-explain it again, and then DRAW it out, and then explain with hand signals and flares until I get it...anyway you get the point.
Last week he was explaining something to me about what battalion (is that even the right word?) his friends from IOC are in. I got all floozy and lost track of everything he was saying when he started throwing out words, numbers and acronyms like...II MEF, regiment, battalion, 2/6, 1/2 and Plt. Commander. Uhmm...hello? Are you even speaking English? Do you really think I have any idea what you're talking about? Usually when he gets in these, "I wanna talk military with you even though you have no clue what I'm saying" modes I just tune out and go into dreamy love mode thinking about how hot he is and how much I wanna just mug down with him when he's done talking. I nod my head and throw in the occasional "uh huh...yea!" so it seems like I'm really listening.
Last week was different. As much as I wanted to go into dreamy love mode, I decided that it was time for me to understand this whole pyramid of Marines. So I tell him that I don't understand and I need him to explain it to me SLOOOOWLY. And he does. But that isn't good enough because as hard as I try to focus on the words he's saying, my brain tries to take over into love mode and it's a battle up there in my head. I decide that this just isn't working and I need to SEE what he's saying (the whole hand signals and flares alternative) on paper so I can study it. I'm a total visual person.
And then, like the lover he is, he scratches out this "map" of the Marine Corps organization. I love that. I love that he wants to try to teach me. I love that he's patient with me.
SO I watch him scratch this out and, for a moment (really I think that's all it was...just A moment) I kinda understood. I felt happy inside like I had just finished a college course and was 2 credits closer to my non-existent degree.
And then...as he continued to explain...I went into dreamy love mode once again. I think I actually drooled this time. Oh well, it's not THAT important. 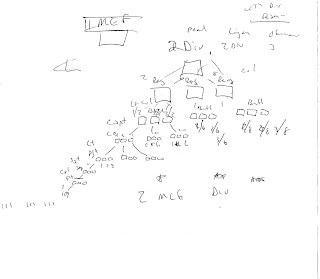 Posted by Jessica the Jacked LDS at 2:32 PM

My goodness, you should give yourself major kudos! It took me YEARS before I understoon the basics of the pyramid. and even after 9 yrs, I still got confused about some of it. Don't worry, and keep that "map". look at it from time to time and try to understand just little parts. Eventually the whole picture will make sense. :) I would have loved to see you drool, hehe.

that drawing looks intense. i can tell ya that its over my head

LOL That is exactly how I react when ElCid is explaining Tax Stuff except he doesn't draw pictures he drags me to the IRS website. I definitely understand dreamy love mode.

very good jessica... i'm glad you tried... i think this is really funny because i go into this mode too when enos starts talking physiology or blood lab... i really DO try to listen but, like you said, it's a real struggle because i just get so overwhelmed/bored and want to instead think about how sweet he is to try and explain these things to me and how i'll never understand...i love MY patient lover too... i'm glad you have one of those.

That is great - it is all quite complicated!! Maybe I will study that diagram myself and try to learn a few things.....it is a very nice diagram! Or...maybe not!

Okay, so once you rewrite it into something that we can all understand, you will have to give us all a class.

I totally do the same exact thing with Matt....I ask him a question about the "bigger picture" of things, and then he goes into marine mode and I can't retain anything that he is telling me, and I too, just tune him out and also throw in the o..okay, I got it, and then smile.

Yeah right !!! CWLIII, Ret. Col., drives me 'round the bloomin' twist with his acronyms, military jargon, etc. Love him to bits, but on those occasions when he attempts to enlighten me I just say: "You've got no chance mate."

AWE! I think it's so sweet that you go into dreamy love mode!

That's funny. Garrett explained the same thing to me last week minus the chart. I'm pretty sure he's explained it to me before and he'll probably explain it to me again. Then maybe a few years down the road I'll actually get it. I like our husbands. : )

Oh man, at least you tried! I just don't bother. I'm hoping someday I'll just get it. Like the heavens will open and I'll just understand. Your weekly wanna-be is AWESOME!! What a sweet friend.
BTW- Can I see your projects?? You know my email.

You are SO funny. That's a GREAT diagram, by the way. I don't get it, but it's still GREAT.