SO another day of early rising to jet on over to the FBI Academy for Austin's TBS graduation. I prettied up all the heathens and we piled in the car for the excitement!
MawMaw couldn't get Jodie Foster and her FBI role in Silence of the Lambs out of her head so she made the grubs pose for a picture by the sign to prove she was there. YES mother, you were there.
Don't my kids look precious!? 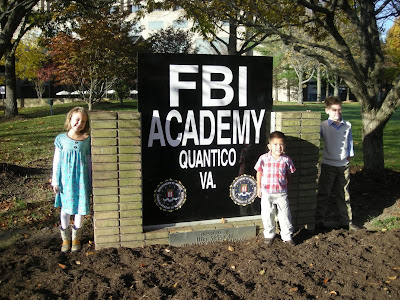 The brothers were especially cute in their sweater vests. 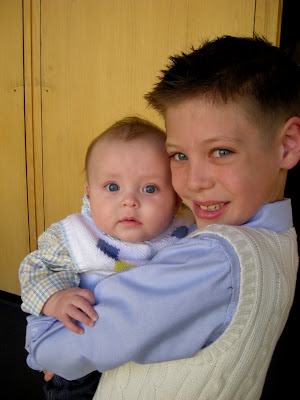 We met Bonnie there and she had to help her man fix his "career" (which they all wear on their chest) so he looked presentable. Aren't they a cute couple?) 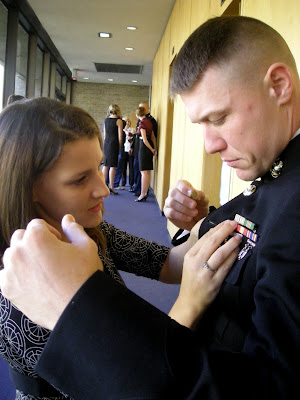 Ahhh...yes. Yes they ARE precious. Too bad she was only a seasonal friend. Oh wait, I'll see her at Christmas cuz she's a freakin TEXAN!!! YAY!!! So maybe she's a DUAL seasonal friend. 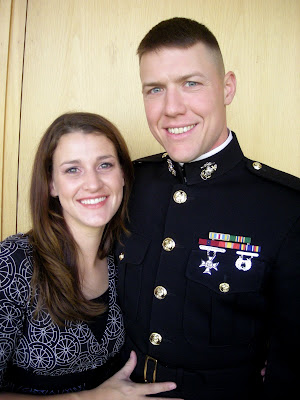 Here we are. The two heathens. Do we look alike?
I know I know...Bonnie is WAY hotter.
Just ask her about her hotness or read her soon to come blog.
(Your welcome Bonnie for once again advertising your blog so you can "borrow" my stalkers" 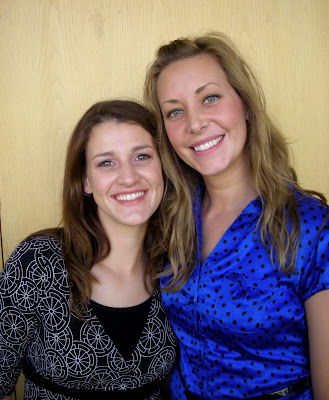 Here is MY sexy hottie Marine that I'm SOO proud of for bustin his butt!! Love you lover, you're awesome!!!! 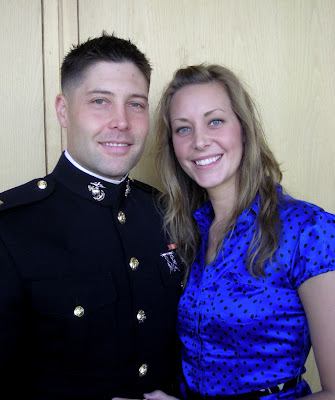 Here are the rowdy heathens. I like how this picture depicts their TRUE personalities. The girls are models with their fake poses and smiles. Cooper is in a different world. Miah is whining and crying about who knows what. Jake is just there, but he's really not. 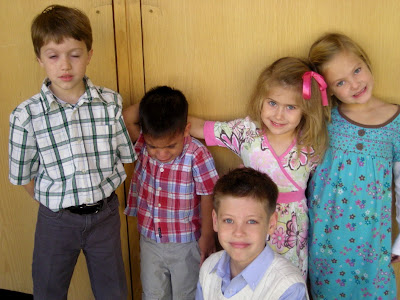 During the ceremony we loaded the kids up on snacks to keep them happy. That only worked until the snacks were gone which was about 10 minutes. 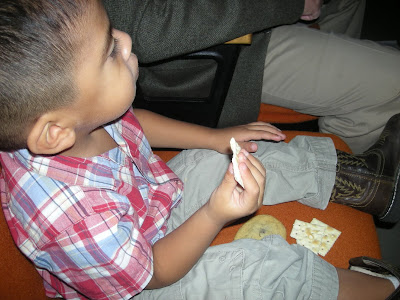 Cooper was so bored he decided to do some GQ poses.
Not a good look for you Coop Dawg... 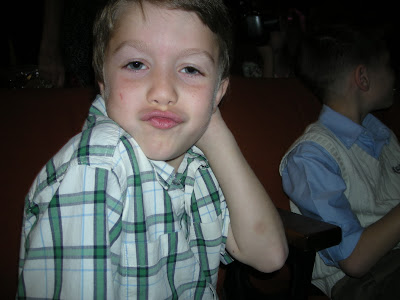 FINALLY, Austin walked across the stage and accepted his...diploma? certificate?
What do they call it? Whatever it is, he got it and he freakin ROCKS!!!!! 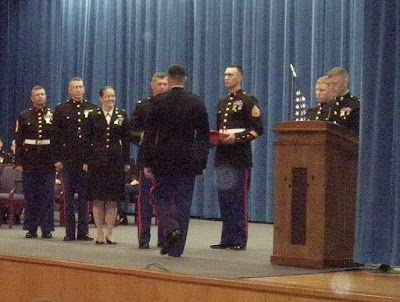 Afterwards we went outside for more photo ops in the dress blues. Okay, now is it just me or do my boobs look totally funky in this picture? They look like saggy bags of rocks. Nasty I tell you. I hope they didn't really look like this the whole day. Maybe THAT'S why Bonnie's the hot friend and I'm just...NOT. That's okay though because Austin is turned on by the fact that I have 397 kids, my boobs are bags of rocks (apparently) and my butt is ghetto. That's all that matters :)
OH and also, Izey is in love with me, that's why he can't take his eyes off me and I love that. 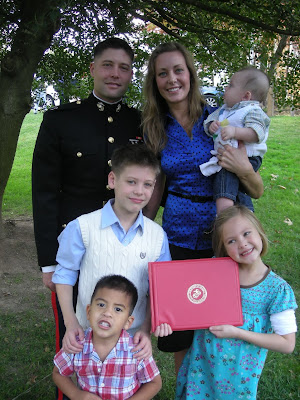 Here we are again. Lovers being lovers. Austin was embarrassed because people were giving him a hard time that he's a Captain but only has ONE ribbon to show. I think it looks JUST fine and if they gave ribbons for completing freakin LAW school on TOP of grad school or passing the annoying stressful bar then he'd be stacked. Poor lover...you're the best to me no matter HOW many ribbons you have flaring across your career'y chest. I'm so proud of you! 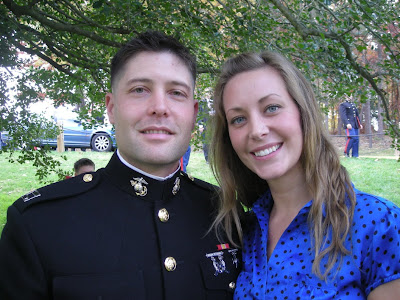 Austin and Nelson. Nelson thinks he's a super model. You should have seen his manly poses. He's such a cutie though I guess he's allowed to be that way! Although he'll never be as hot as MY Austin. Keep trying though Nelson...you're SO close. *wink* 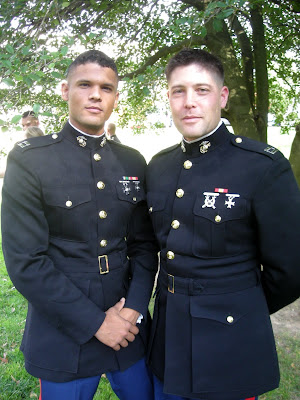 The day was grand. The three past, present and future Marines walked away feeling accomplished. 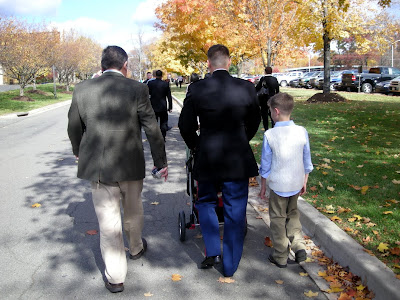 The celebratory lunch was at Ruby Tuesday. By then, Pops had gotten his wedgie out from yesterday and was smiling again. 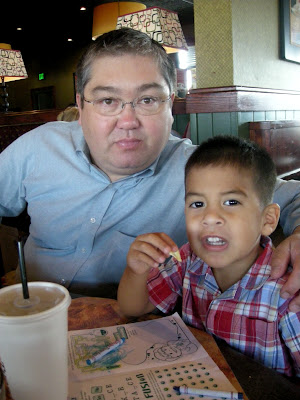 MawMaw and PawPaw smiled. But only for the picture.
Please disregard that big yellow crayon Kora thinks should be in the picture too. 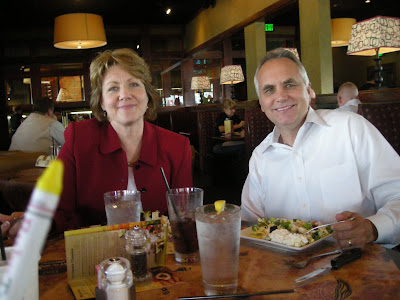 Isaak and I enjoyed our shrimp and formula. He was still concerned. But he had fun. 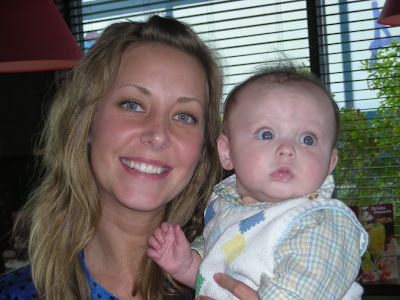 After lunch MawMaw decided to show her true colors. 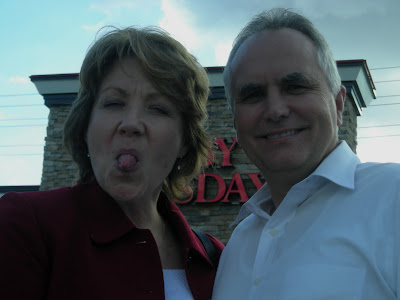 So as IF that day wasn't long enough, we decided to make it longer. We took everyone over to the Marine Corps Museum to have a little USMC fun.
Maw Maw did a pullup. BUT, she was actually standing on the ground using the little bar so it doesn't count. 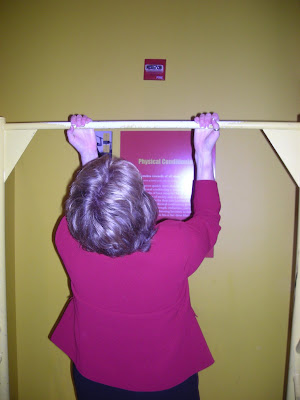 I, on the other hand, busted out a REAL pullup because my adrenaline was freakin flowing and I ROCKED it out! Bonnie and Amber...LOOK AT ME!!!! In my skirt and heels!!!
(ps...I did the jump trick like you taught me Bon) 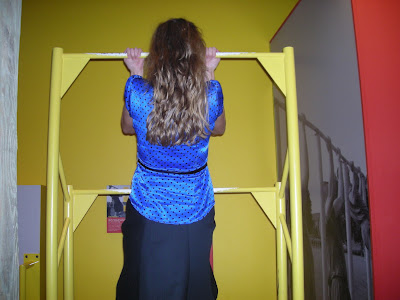 Jake did the rifle simulation and got 59%. He looked like a hottie! 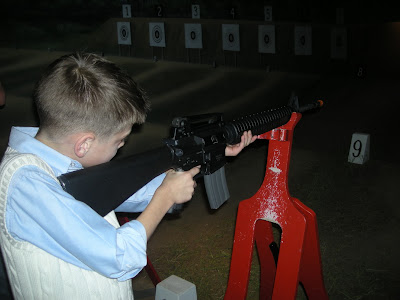 To end the trip we visited the Museum Gift Shop where we found THIS amazing masterpiece made out of LEGO!!!! Holy mother of Marine Corps LEGO!!!
For those idiots who haven't lived on Earth for any of their life, this is the recreation of the famous Iwo Jima photograph of the second flag raised on Mt. Suribachi. The photograph was taken by Joe Rosenthal and the flag was raised by Easy Company in 1945 after they experienced 40% casualties after fighting for four days straight during World War II. 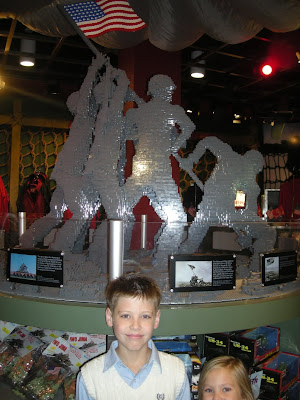 So that's all...and to end on a good note, let me share with you a lil sumthin to make all you Devil Dogs out there smile! Ooh-Rah!
(or you can just play the video and look at the pictures again with nice background music to go along with it!)

Posted by Jessica the Jacked LDS at 5:48 PM

While listening to the music I went back over your pictures and no worries your boobs didn't look funky in all the pics. I'm proud of Austin and I don't even know him! Way to go ALL of you!!

So you totally should have deleted Anchors Away from the video and just left the Marine Corps Hymn... but it's good nonetheless.
I am freakin' proud of you for bustin out the pull-up! You did it! All those long hours at the gym (making our hair grow) really paid off!
by the way, I love the pics! I am gonna steal them and put them on my blog! Someday I will be the expert blogger that you are and actually include them in my posts.
I am totally bummed that we are leaving next week! I will miss you and your fam! But like you said, I'll see YA'LL in Tejas!

You guys all look so cute:) I love those pictures of the kiddos and the whole fam:)

Woman....you are GORGEOUS!! You have a good looking family, but YOU make everyone sparkle by standing there! Huge congrats to Austin, I know how hard it is to deal with school, work, family, etc. It's more stressfull than people w/o kids realize. He will rack up the ribbons before you know it. I remember how proud Bill was of his ribbons. Diamonds hold nothing against all the honors a military man wears on this chest. I am so happy to see you fit right in with the lifestyle so far, and being happy yourself too, you might surprise yourself and find you love all the adventures that come! Congratulations to Austin, but it's a big congrats to you too Jess, he can't do any of it without you being so awesome!

CONGRATS to you and your lover! You DO realize that you both graduated from TBS right?!? It was just as hard for you as it was for Austin....well.....maybe NOT as hard, but close to it. At least you had some great friends to keep you company while he was having to work his long hours.

Your boobs look hot women! Your outfit was really cute too, your beautiful too, just like Bonnie is!!!

Umm, and I am VERY proud of you for doing your pull-up!!! You totally rocked it! I am sure that Austin was very impressed, especially since you were in heels. But what a minute....since you were in heels and your like 10ft talls anyways, you really didn't have that much to actually "pull-up". That jump you did pretty much put your chin over the bar didn't it!?! Its okay, I'll still count it!

CONGRATULATIONS to you both! You have SUCH a beautiful family!!!

Congratulations indeed. I have to second and third the compliments on the family...beautiful family! The kids look so cute all dolled up. I really love Kora's boots, please tell her. What an exciting and long day, and what a relief to know it is over. I thought of you today as I was walking out of the Manasty (Manassas) Wal-Mart and I saw a cute little toddler with I believe the best mullet I have ever seen. I thought, "Man, I know if Jessica was here she would have her camera at the ready to snap a quick shot of this masterpiece." But alas, I did not have the quick fingers like you...someday;) So when are officially outta here and in the NC (we can make it sound like a way cool place...like the "OC" right?)

that's awesome. i love the pics. so...stupid question...but what exactly is TBS? And how do you get different ribbons? what do they mean?

i'm so impressed with Austin... and YOU because you supported him through all of this!! way to go Lowe's!!! Now... if only i can do the same when enos goes to dental school.. eeek. And yes... your boobs look weird in that one picture but at least your hair and makeup (and tan skin) look great. i'm sure it was just the one picture.... at least you're not busting out of your MATERNITY pants... right? stupid giant butt.

Congrats boob girl and her lover!!

You do have a lot of kids, come to think of it.

Kids are better than ribbons, right? Isn't that how it works?

Congratulations! Way to go on the pull-up! I'm glad that all that jaw wagging at the gym helped build up your biceps!

So where is your Canon 5D?? The lady in front of yall had one with a massive lense...sorry, of course I would notice that! Congrats Austin!!