To continue on our eventful weekend, we spent the day yesterday touring around D.C. with the family. I STILL cannot believe how blessed I have been to have the PERFECT baby who just goes wherever we go and is perfectly fine about missing his 3 naps a day as long as mom or dad is hugging him. He still has his wrinkly forehead of worries, but he's excited about seeing the commandant's house! 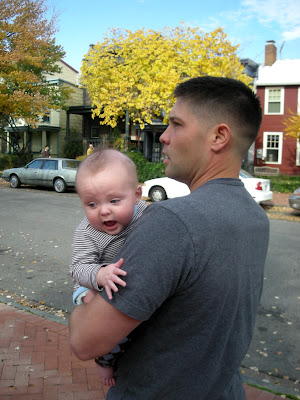 Here we are at 8th and I to see the commandants house and the barracks of the silent drill team platoon. It was really beautiful, this area was so gorgeous and had such historical town homes all lined up. Can you imagine just living right across the street from the commandant? For those of you who don't know, he's like the President/Prophet of the Marine Corps. 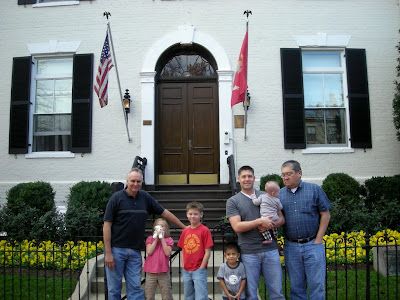 This is the plaque in his front yard. 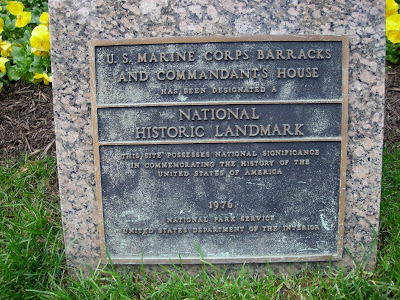 Then we all jumped on the metro (which was MUCH better without 5 million ppl pushing and shoving us around) to go visit Arlington National Cemetery.

I didn't expect it, but walking in and seeing all the headstones I felt a little lump in my throat and could have easily released a cry but I held back. It was moving to see the amount of ppl who have died for our country. AMAZING. 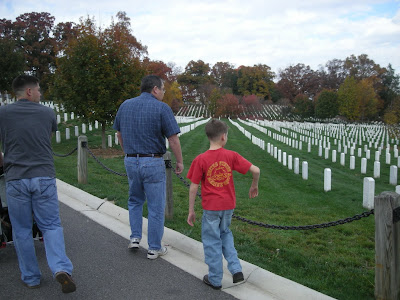 There was so much to see here but we were short on time so we just hit the highlights. This is the grave site of JFK, his wife and their baby who died. 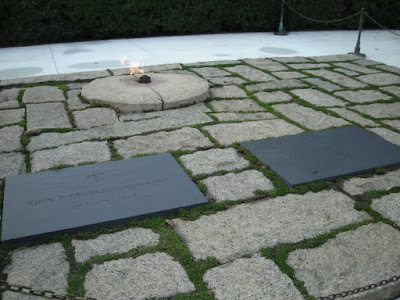 We had to prep the kids and have a pow wow with them explaining that the cemetery was a sacred place and they needed to be reverent just like they are (or try to be) in church. They were all so good about this. Especially Miah, being so young he just looked and whispered. If he happened to forget about being reverent, Kora would quickly remind him. 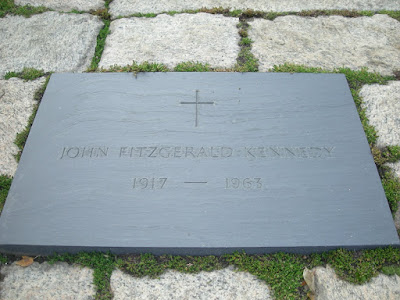 It was a solemn walk through the cemetery. Beautiful and touching. 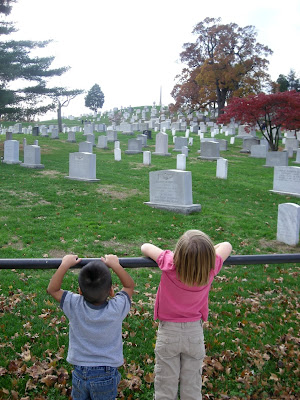 We came at the PERFECT time of year, seriously! The weather was perfect and crisp and the fall colors were so abundant and bright! Leaves were everywhere and I noticed this poor leaf blower whose job I'd hate to have. 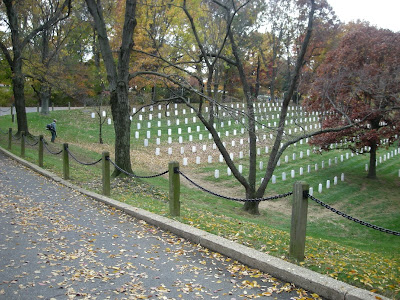 Here is the tomb of the unknown soldier which is guarded by the Army all day until closing. This tomb represents all those who have died in battle whose names are unknown. It was so quiet here as people just stood to watch the soldier pace back and forth. We stayed to watch the changing of the guard too which was pretty cool. Jake studied their movements and has been home practicing his walk ever since. 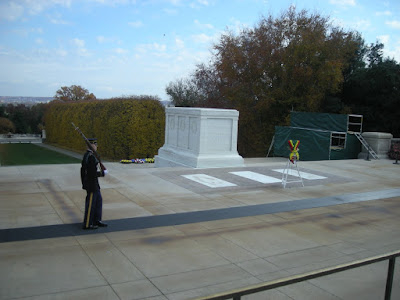 After the cemetery, we jumped back on the metro for a cliffs notes version of seeing the Washington Mall. Now when I say cliff notes, I MEAN cliff notes. We were in a hurry because Austin and I had plans that night to go out with friends and the sun was racing to beat us. First we had to refuel at Quiznos. 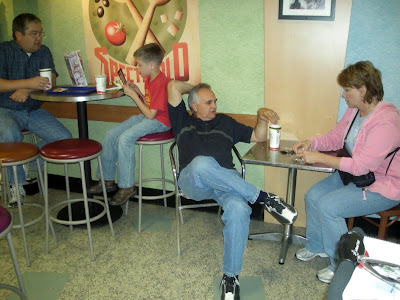 The we ran across the street on our way to the White House. Here's our first tourist attraction in the background. Squint your eyes to see the capitol building!! 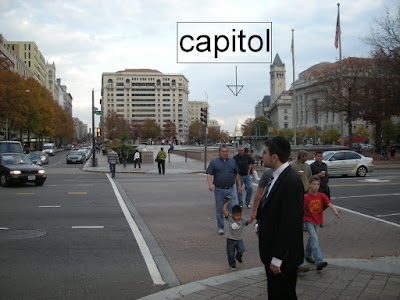 Ahhh....the beautiful White House, our second photo op. The kids loved seeing Corey in the House's House. Keith mentioned how easy it would be to jump the fence and get in there. We dared him to try knowing those snipers on top of the building would have a hay day on him. He chickened out. 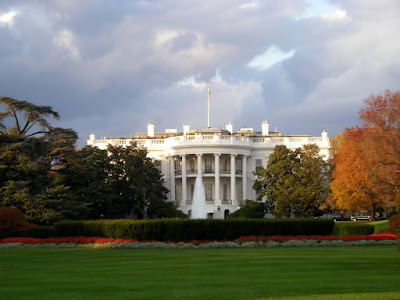 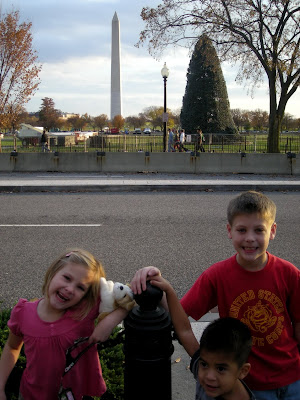 I noticed it was a bit crooked so I just tweaked it a bit! 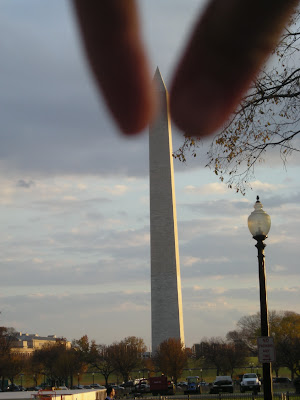 Even though the day was super rushed and we only saw a FEW major historic places, Austin STILL made time to stop and smell the roses. 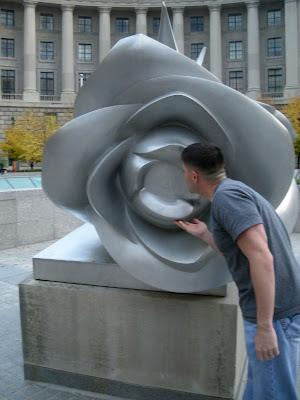 And then he acted like a FOOl and played his Rocky ring tone as he ran up this stairwell.
This is why I love this hunk of burnin' dork!
THE END!
Posted by Jessica the Jacked LDS at 8:42 AM

What a fun adventour!! I wanna!! OK so like you have had something fun yall did on your blog everyday...why are yall having too much fun without the Herfurths???!! We miss you!!

What great pictures!!!! It looks like you were great tour guides for both your parents. But I would have to say that my favorite pic was of you fixing the Washington Monument. It did look alittle croocked. The pic of the White House was beautiful with all the colors. You must have a Nikon camera to have taken great pics like that!

How come you left out last nights dinner?!? I HOPE that you blog about that, and all the events that took place! If you won't, I WILL!!!! Hahaha!

WOW---So much in one day...and Izey really mist be the perfect baby to be able to take all that! L would be screaming after 2 hours (or maybe before that)!

You know, The Tomb of the Unknown Soldier is actually guarded 24 hours a day, 365 days a year, through all and any weather. There is no closing time for the sentinels. It is actually pretty cool.
AND, JFK is buried beside his wife and TWO children. His son died only 4 months before him and his daughter was stillborn.
Anyway, sorry... but that stuff is so interesting to me! I definitely recommend the tour next time! I would like to go back someday without kids!

It looks like you guys had fun! There is so much to do there, that it is impossible to get it all in in one day. Since you are staying on the East Coast, you should try to come back. Maybe, I'll come back with you!

Fun Times! I tell my kids about all the things we'll see someday when I take them. We'll have to add the Tomb of the Unknown Soldier and JFK's grave site to the list.

Thanks Bonnie Wikepedia Snipes. I was wondering if they stopped guarding it at night.