I woke up this day like any other day although it didn't turn out like any other day (well, maybe it did because my life is so full of drama this isn't anything new). I got the kids all ready for school only to walk outside to THIS little beauty... 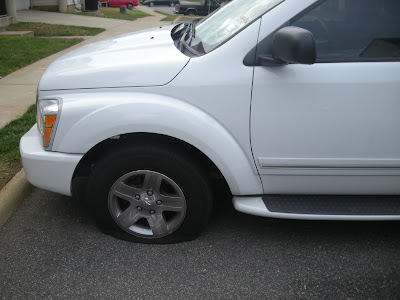 POOP!! I saw that tire getting low yesterday and even announced to Bonnie, "I think my tire needs air." but did I get air for it? Of course not, why would I do that? So here was my situation: The kids needed to be at school, I needed to workout (Bonnie was waiting for me and she can't do it alone, she has so many issues), and the tire needed fixing for our trip tomorrow. Hmm...what's more important?
I guess nothing was gonna get done unless the tire was fixed so I began my work. I pulled Izey outside to watch cuz he likes to have me in view or he gets a little rowdy. The kids all sat on the curb and watched me be tough (or at least pretend). I started pulling out all sorts of metal randomness from the truck to fix the flat. I had watched a flat be fixed over 5 times, I knew I could do it, I really wanted to. I wanted to be that super woman mom who's husband is a Marine but is always gone so I have to do all the tough manly stuff around the house. I tried, I really did. I put two big metal pieces together, they looked like they worked hand in hand. I got the jack out and put it under the car but I couldn't find the thingy that turns it up so I just used the little crank thingy back and forth and back and forth. It took forever. This is why I hate my ghetto neighborhood: No kidding over 30 cars WITH MEN in them drove by me on the ground, jacking up my big truck with my 4 grubs sitting outside watching me. Did they stop to help? No, cuz their too freakin ghetto and their too concerned about being late to work to help a poor husbandless mother (I'm really playing up the single mom thing aren't I?) with a flat whose husband was out saving the world FOR THEM (okay not really, but at least he's pretending to be saving the world right now, doesn't that count?) One man even walked by me after taking his kid to the bus stop. He's probably such a loser that he doesn't have a job and just sits at home watching TV all day but he's too cool to help a poor girl like me fix a flat. Well, I don't know that for sure, but he DID see me and he DID keep walking. Loser.
I sat there cranking that dumb thing up for what felt like hours (but was probably only 15 minutes) until I realized that I needed to make sure I could unscrew those lug nuts or I wasn't gonna be able to do anything. The tire was still on the ground, the jack had a long way to go and my arm was getting tired and when I tried to unscrew a lug nut, it wouldn't budge. What the crap??? Righty tighty lefty loosey, right? I was goin the right direction, why wasn't this beast unscrewing? Forget it, I'll check the spare and see if I can get that off. I look under the car and see the spare attached by some crazy trinkety type of metal weirdness. I've never even seen something like that. It wasn't like a screw off type thing, it looked like it needed some sort of ratchety (that word's for you Kempylu!) utensil. Something I didn't have. Bleh. This wasn't gonna work so I gave up. Luckily, our sweet neighbor saw me and offered to take the kids to school for me. That's nice, a SINGLE mother herself who doesn't even take her OWN kids to school cuz she's so poor she probably doesn't have money for gas is the ONLY one who stopped to help me with my problem. Stupid ghetto trash neighborhood. Anyway, I was thankful for the kind woman and I took her up on the offer (I'm gonna make her some cookies or something yummy). The kids loaded up and they were off but me, Miah and Izey were still stuck and my thighs weren't gettin any thinner just standing there lookin at this mess I'd made with all those pieces of tools.
Good thing I have lots of friends who love me cuz one swung by and grabbed me and my 2 chickens and took us to the gym on her way there. I think she felt sorry me because she knows I work out EVERY day for TWO hours a day and I STILL haven't lost weight. Poor me. 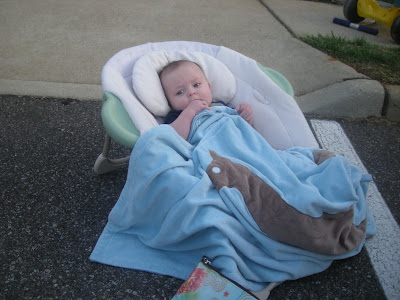 This is how i left the truck. Little did I know I have free roadside assistance that came and fixed my flat in 10 minutes for me! That was easy. For a second I thought about lying and saying 'I' fixed the flat. Austin would have been so proud of me but I didn't wanna continue my lying streak and I'm workin hard at being a better Mormon so I'm telling the truth :) 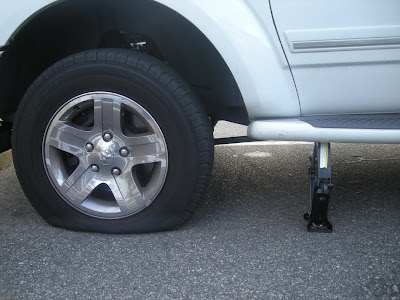 After the kids got home from school we went to get the tire repaired and then we were off to stinkin spirit night at Chuck E. Cheese for Jake's school that I HATE. Ugh. I can't believe he talked me into this. If he wasn't so freakin SWEET I wouldn't have done it.

Here are just a few reasons why I suggest to you NOT to go to Chuck E. Cheese in Fredericksburg, Virginia: 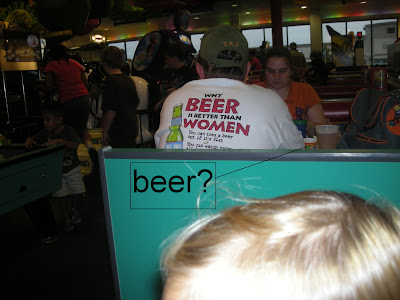 2. Grandmas with mullets. I got caught taking this picture, not by the grandma with a mullet but by a man in the booth next to her. He didn't know whether to laugh or give me a mean face so he just twitched his eye a little and then acted like he didn't see me. 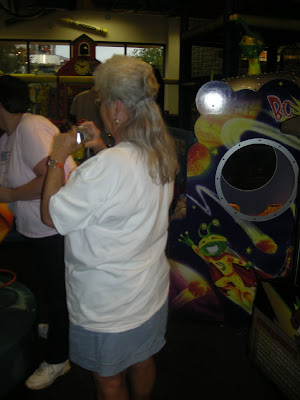 3. Too good to be true Chuck E. Cheese photography. Not having a family photo taken in over 2 years makes me double think these pictures taken tonight. Would it be ghetto of me if i had them framed? 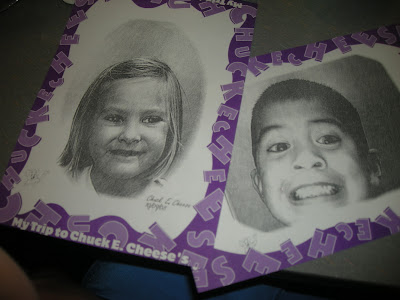 4. Eye candy for Isaak, but not the good kind. Even HE was dumbfounded at the sight of some of the visitors there, he couldn't stop staring. (Camera angle Lindsay? I think not. This baby is cute from ALL directions!) 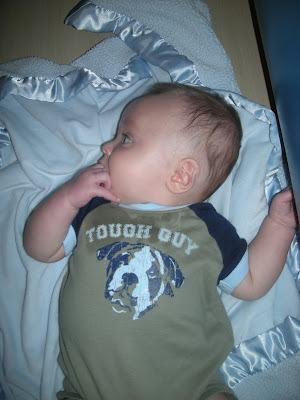 I'm telling you, this state has the freakiest looking folk, no freakin joke. I wanted to take a picture of almost everyone there but then I felt bad about blogging about ppl who have no clue they are being bashed. Then I remembered I hadn't bathed after working out, was still wearing my workout clothes, had nasty workout hair and no makeup and realized that 'I' looked just as bad, if not WORSE, than the ppl there so I should just take a picture of myself for you to see because I'm pretty much the same as the trash I'm makin fun of. So here's a picture of me lookin nasty...


Just kidding, I'm not gonna embarrass myself like that.
It was funny though, right?

Posted by Jessica the Jacked LDS at 6:51 PM

Yeah, we don't need a picture of you being nasty... we've seen enough already. By the way, how is it that Isaak looks cute in every picture you take of him, he is a freak of nature!
I like the fact that you bring up my "many issues" but you didn't credit me with driving two hours out of my way to pick you up, making you thinner, chauffeuring you around, telling you to check if you had roadside assistance, driving you the four hours back and entertaining you while you got the stupid thing fixed. I'm just saying... a little appreciation would go a long way!

oh my MULLET NATION... that is HIDEOUS... and what's worse is how confident she is in it... Look at my mullet pony... it's so full and white!... ew. These people are so weird!!! i can't believe that... i take everything back i said about MY ghetto neighborhood... it's not THAT ghetto. Also... you're right about isaak.. but then, i knew that already.. i was only meaning that the downward angle accentuated his cuteness.

okay--This post was one of my FAV's!!! You CRACKED ME UP! LOVE IT:) Sorry about the flat but it made a good blog:) I would have NEVER and I repeat NEVER tried to do that with my chillins all there on the curb. I would have called roadside ASAP...I know all about em' and I love em:)

I am going to grow a mullet when I become a Grandma. I just decided that right now.

Those guys didn't stop because you looked like you had it all together...and deep down, you know they didn't know how to use the ratchety utensil either!

Nice pics...my other friend has sent similar ones. They're in Terre Haute, Indiana.

I love my roadside assistance they have unlocked my car and changed my tire in the past, they're fantastic!
Ur Chick E Cheese is scary, do they have the black light stamp like mine so those ppl don't steal ur kids and give them mullets? Yeah right! You didn't look nasty in the middle of childbirth, how bad could it have been really?

All I can say is you think there are weirdo "whiskey tango" in Virginia...well just wait till you get down to NC, Baby! Chuck E. Cheese and Wal-Mart are the prime hangouts...beware:)

That is really pretty sad that no one came and helped you out. If I was there I would have:)

You poor thing! Good thing I was busy at Warrior Day on Thursday, otherwise you probably would've called me to be your chauffer! As if!!! LOL, but really I would've been there for you:) And I probably would've went to Chucky Cheese with you too. My kid are always asking to go, and I am always telling them that its a "nasty place"! Good thing I now have proof that it is! We had our stupid spirit day on Wednesday night at our Chickfila! I added my contribution by going through the drive thru. Isabel wanted to go in to eat and see the "cow", but I was being a really lazy mom. Hey, she should've been happy that we ate out and for making a very generation donation to her school....well a portion of what we ordered went to the school. OH well!!! Glad that you got the tire fixed before you had your drive down to NC! That wouldn't of been good!

I love people watching in F'burg! The spotsy mall is the best...well maybe Chuck E. Cheese is now, but you won't catch me there! Hope you are having a good weekend in NC and Isaak is absolutely adorable...no matter what angle!

Uh yeah, NC is not all that fun, there is nothing to do unless you drive to Myrtle Beach or Virginia Beach other than that it kinda sucks. Well you will be by the coast (lucky) so maybe it wont be that bad.

I'm so impressed that you tried to change the flat. If you had succeeded, you would truly be the master of all things requiring a ratchet! I'm still in awe over the bunk beds.

How crazy that nobody stopped to help. But maybe it's better that way--since your hood is ghetto and so are the people at the pizza place, you probably don't want some sketchy man changing your flat.

And speaking of your workouts, did you try the killer buns, sexy legs workout yet? Why didn't it get a post? J/K