Okay y'all, I'm here to report on my visit to North Carolina to house hunt and get a feel for the base I'll be living at for the next two years.
We left Friday evening when Austin got off and drove until midnight until we finally arrived at Camp Lejeune. Lucky for me and my family, the wonderful world of blogging has found me a new friend named Summer who so graciously allowed us to stay in her home. They were on a mother daughter camping trip (she and her three gorgeous daughters), and her husband is deployed so her home was empty and awaiting our tired bodies.
The first morning we met our new friends for the first time as they came home from their camping trip. They are the cutest little bundle of girls I've ever met, so friendly, so sweet and so hospitable to allow 6 strangers to stay in their home over night. Austin and I had plans to meet the realtor after lunch time so Summer took all FOUR of my crazies for the ENTIRE day while we house hunted. She was even brave enough to take them, PLUS her three girlies out to a movie while we were gone, WOW!
The house hunting was pretty much dreadful. It rained the entire day which added to the depressingness of that bleh city. House after house we looked at only to be disappointed by each one. Not only were the houses sad, but the city was making me feel very out of place. Most of the streets go a little like this: Strip club, tattoo shop, used car lot, random old house that looks like it's gonna fall apart any second, strip club, tattoo shop, McDonald's. Hmm...this is what I get to drive by each and every day? Nice. I even got a little jealous because I saw this car and it's bumper sticker saying, "I LOVE AB". What the crap man? I mean before we even move there someone is already trying to steal my man. I love Austin's Butt more than her I KNOW it! 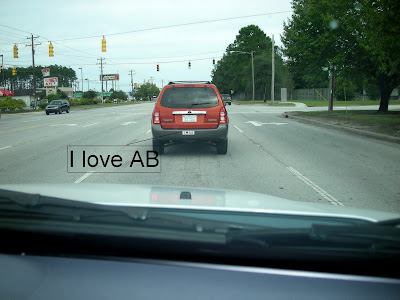 I was getting nervous as we came up on our last two homes but miraculously, we found a diamond in a the city of coal. It was perfect The outside was so welcoming and friendly, it was almost like it was BEGGIN for us to come inside and stay for a bit :) 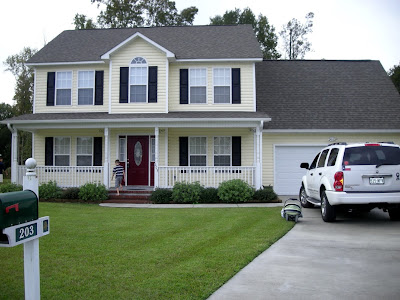 Here are some pics from the inside! We were told we can paint that blaring red kitchen (phew!) but other than that it's pretty precious! The house is also for sale and if we feel it's right, we may end up buying it in the middle of our lease but for now, leasing is all that felt good. 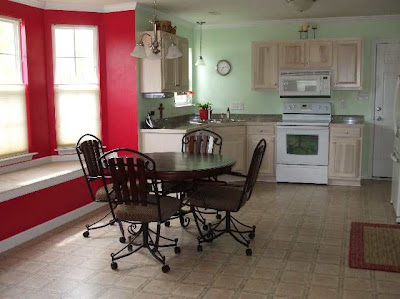 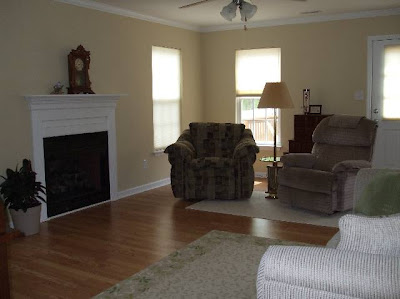 The upstairs has four bedrooms one of which is this wood floored one which the two big boys will share. Kora will get her own room and Isaak will get his own hood too! 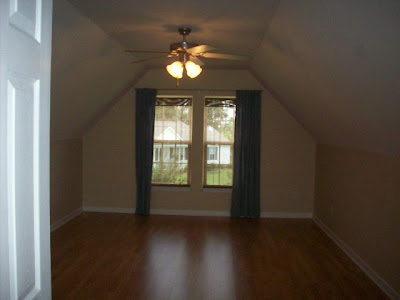 Me and Austin get a big ole room and a fun big tub (and you all know how I love my baths!). 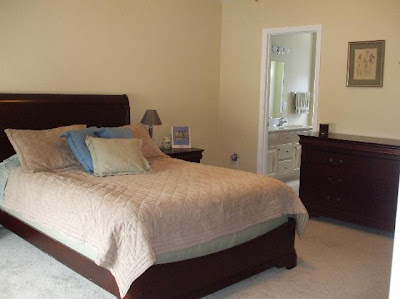 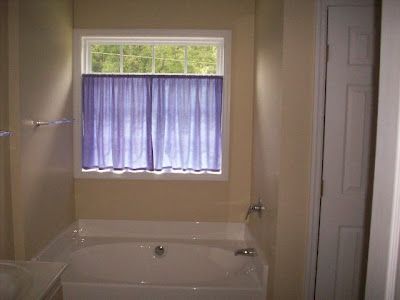 The backyard is so inviting! It screams for a party to be held back there with grilling and water sprinklers, can't you feel it?! Behind the fence is a big forest of trees that Jake can go explore in which he'll love. It's perfectly settled in a cul-de-sac so the kids can ride their bikes in safety without thru traffic. Seriously, this house is SO perfect. The pickins were slim and I'm amazed at what we found for ourselves, I LOVE IT! WHICH, brings me to talk more about the wretched city. Yes, it's ghetto (MUCH more ghetto than where we live now), yes, it's trashy, no it doesn't have much for shopping (only a Target and a rinky dink mall, a Michael's and a Pier One), no it doesn't have a highway for me to jump on to blast outta there, but hey...it's home now so I'm gonna try to be more positive about it. Maybe this is an opportunity for our family to spend more time being together at home doing homey family stuff. I'm excited about that :) Our neighborhood is a little out of the way so we aren't IN the ghetto. It's about 15 minutes from the base but it's worth it because I don't wanna live in the hood. We already have some super fun friends there and I'm sure we'll make more and more will move in (wink wink A.W.). SOOO, all that being said, I like it! I'm happy.

OH OH OH...and the best part? Well, I'll let these pictures show you what we get to enjoy every single day (if we want to!) 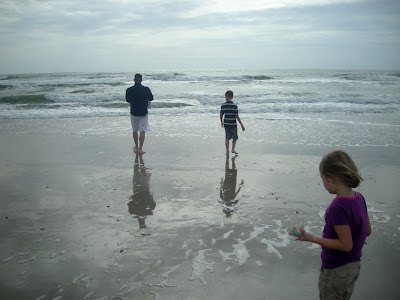 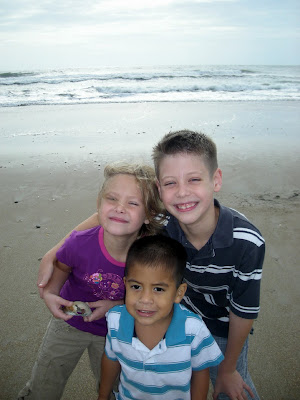 We found lots of seashells! The kids didn't understand why they couldn't take ALL of them home with them! 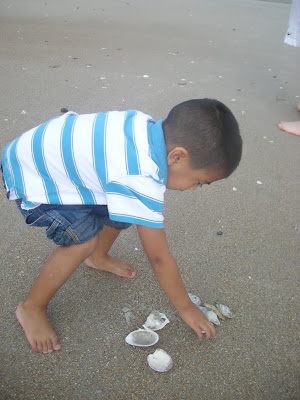 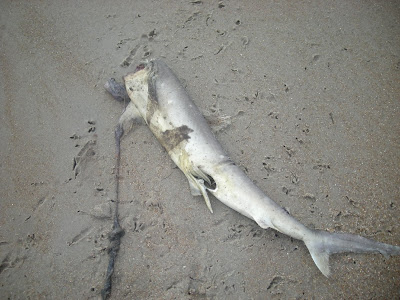 I sure love my sexy husband with squinty eyes! 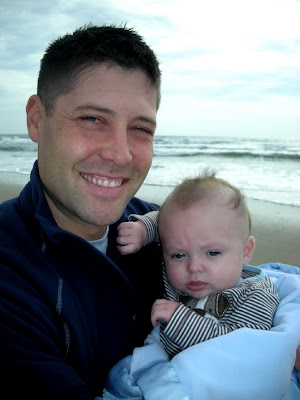 Now it's only a matter of short time. We take possession of the house in less than a month but won't be able to move in until the week after Austin graduates (November 7th!!!) I cannot WAIT to get in our home and set up all our fun stuff in it to make it our own.

Thank you Summer and girls for lettin us stay with you the ENTIRE time we were there. You guys rock and your buttermilk syrup was so yummy I had dreams about it last night. I need that recipe! We'll see you soon! And thank you Aymee for finding me and telling me about your awesome cousin!

Posted by Jessica the Jacked LDS at 3:27 PM

that house looks incredible! I'm so excited for you and your family. Nov. 7th is around the corner. Congrats!

That house looks awesome! I am so excited for you guys. Nov. 7 will be here before you know it. I can't believe that you would refer to Jacksonville as ghetto...

oohooh loving the porch and the wood floors. That backyard looks like it's fake it's so nice. it'll be great to get settled for at least a couple of years. And that IS one seriously nice stranger to put you up AND babysit all day.

You didn't even mention the best part of J'actionville is that I will be joining you there! How freakin awesome is that?!? So, don't be making much more friends because I will have to turn into a stalker and be a "super jealous bff" if your not careful! LOL!!!! I love you new house and I can't wait until you have us over for playdates in your nice fenced in backyard:) Yah!!!!!

Oh, and I will take you down to Wilmington when I get there. That is where ALL the shopping is:) I let you tag along with me:)

What a cool house!! I wish I could come visit you. Is that legal? I mean, we're strangers.

And how awesome to be so close to the ocean. I'm so happy it is working out so well for you!

Not that I've met you in real life but that house sooo looks like you!I'm definitely going to find a CPE course for ElCid near by so I can come play with you in the ocean. I'll toss in a couple bucks for paint for the red wall yikes!

WOW...what a beautiful home....i love it

You are so welcome. I am so glad you got to meet Summer and the girls. They are wonderful! I love the house, it is so cute! And how far are you from the beach? Take full advantage, because I know when we lived so close we never went and then when we moved away I was sad that we didn't go as often as I would have liked. That little Isaak is so cute! What am I saying, they are ALL cute! Glad to hear it was good. Also good to take advantage of the tattoo parlors being so close too;)

The house looks amazing! I am so jealous as I want a yard. And a beautiful kitchen (even painted red it looks amazing compared to mine) and the beach!! So totally jealous of you right now.

Make me feel better and share that buttermilk syrup recipe!

YEAH!! The lowes get there house finally!! It looks super, like a little old plantation house...but not so little and old!! What a HUGE backyard...and a beach...what the heck!! What are you going to do with all that room!!

okay --that is AWESOME:) I finally finished reading it:) Imagine Christmas in that cute house! I can't wait to ready about all those fun family (homey) activities you are going to do! LOL:) But seriously----That beach looks beautiful! I haven't seen the ocean in probably 20 years.

Yeah for you guys. What a cute house. I agree with Laura about the backyard. That is some green grass. I can see you at the beach regularly...fun fun fun.

wow... i'm SO JEALOUS. I wish i had a cute little house like that. It's so PERFECT!... and the beach RIGHT there? again. the jealous-ness. *sigh*..... can i come visit you when we move? It REALLY looks like Lucas needs to visit his cousins when they move to this house. i love Izey in that last picture... he looks worn out and wind blown.

So, hey... the house is beautiful. Did it come with the baby carrier or did you just abandon your child for the sake of a photo op? I'm worried about your children being at the beach. What if you see some "photo op" and your child is left to drown. I think that maybe you should be supervised on all family trips, with a camera there is no telling what you will do.
Anyway, I can't believe that it's only a month until we all leave. How sad?! I'm gonna miss ya! But at least you have a cool house to go to and friends waiting for you! It will definitely help you ease into the ghetto that is Jacksonville.
Missed ya today!

I LOVE this house. SO CUTE!

Congrats!! I love the house and love the beach!! So exciting!

I have been out of the blogging world for the last 10 days or so....lots to catch up on. Oh I love the house you found. The wooden floor are beautiful! At least you have the beach and Target....and friends there already!!

We LOVED having you stay with us. Emerald saw your blog today and was excited to see her friends on the screen. I am so looking forward to you all getting here. See you soon!