MY boys, that is!
Before having ANY kids, I would always picture myself with all boys. I've never been the girly girl type. I was pretty much a tomboy growing up doing all the crazy things that most girls wouldn't do. I was my Dad's only boy, since he didn't have any real ones! (Wonder why that didn't score me the "favorite child" role...oh well!) I'm just NOW becoming more of a girl than I have ever been. Although I'm totally thankful for my one beautiful girl (who acts more like a boy), I've been SO blessed to have some pretty awesome boys in my life.
Yesterday my cute boys all lined up and had their hair cut at the same place, same time, same style. This was a first for Miah and Jake who have never before had a REAL Marine haircut. Austin and Miah went with the medium reg. while Jake stuck with a more milder cut, the low reg. Looks pretty much the same to me but oh well. The boys look absolutely PrEcIoUs with their cuts, I just wanna squeeze their cheeks (not the bum ones but those are precious too!). 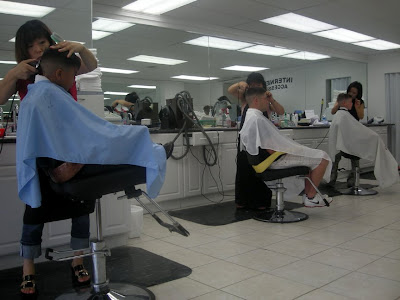 The Asian ladies have an obsession with suckers and had my children constantly stocked with one in their mouth and one in their hand. The instant Miah or Kora ran out, the ladies would quickly grab another to replace the last. Jake is totally not a sweets person and after the lady gave him one (which he didn't even eat) the lady tried to give him another one and he said, "I already have one." Yeah..he's not really a kid but actually a grown man in an 8 year old body.
Miah just sat so still sucking his sucker while the lady buzzed away. 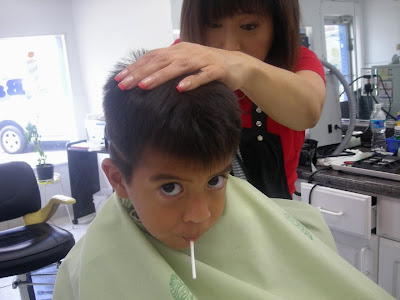 There was ONE of my boys who didn't participate in the hair removal experience. Don't worry though, Izey didn't feel left out because when we got home he had his Daddy time. He slept good too, wouldn't you if you had that bottle of paste? 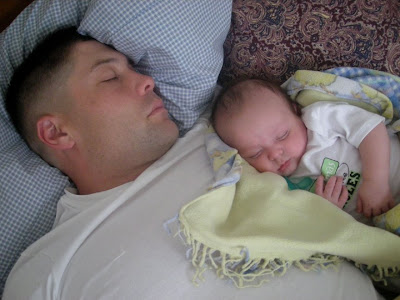 Posted by Jessica the Jacked LDS at 7:56 AM

Ah, that is so cute! Your boys are so handsome! Coopdawg is adamant that he does not want to look like a marine...but I think it's cute! Anyway, I really love those sleeping daddy/baby pictures. I think we have one of those for every baby! It's just so sweet, makes you wanna wake 'em up and kiss on 'em!

#2 Did Isaak ever have any crazy consequences from Kora's first scooping experience/experiment (brought back memories of talking to 3 yr old Kora on the phone a couple times in your apt. Kora, "Hello." Me, "Is your mama or daddy there?" Kora, "Mom's gone and Daddy's asleep." She's always been Daddy's big helper. :) (I'm laughing)

i love this... sweet sweet boys. I hope enos gets his wish and we have a boy first... but i'm pretty sure we won't. I feel it.

So is he still working on that one bottle? Any diapers full of pebbles yet? (he looks to small to poop bricks :)

AWE!! I love seeing daddy and son reunited at last!