Today was the big day of Cooper's Birthday party! I made the mistake of waiting until the morning of the party to throw the cake together so I was major stressed all morning trying to make it work. Poor Isaak was laying on the floor watching TV and finally just fell asleep because Mommy wasn't lovin all over him like I usually am. Doesn't he look simply DIVINE! YUM, I could eat this baby boy up! He's gonna be my little snuggler who just loves Mommy to death, I already know it. BUT, isn't that how last borns are supposed to be? You gotta blow this picture up to get the full effect...go ahead, you know you want to! 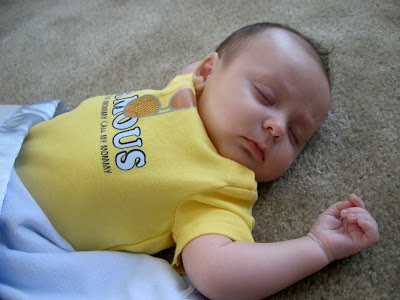 So the cake. It went well, I think. It looked nice but I'm not sure about the taste. I ended up doing a sponge cake roll because everything I read about cake rolls said that you should do it with a sponge/angel food type cake. Apparently they hold together better when you roll them up and I didn't have time for a yummy devil's food cake to fall apart on me last minute. I made it a chocolate sponge with a cream cheese filling which was deeeelicious but put it with the sponge cake...hmm...not sure. I didn't try the cake because I didn't want to know if it was horrible. I knew that would just embarrass me more so I refrained from partaking.
The fondant went SEMI well. No one told me it's just grownup playdoh. I hate playdoh remember? The handle of the saber was easy but the actual stick part was hard because I had to use such a big piece. It kept falling apart and tearing. I did it three times and then freaked. I sent Austin to the store to get regular frosting for my backup plan because I knew the fondant wasn't gonna work out. While he was gone I decided to try ONE more time. This time I didn't roll the fondant out as thin because I knew it would stretch when I picked it up and voila! It worked! Once the fondant was on the rest was a piece of cake (no pun intended). 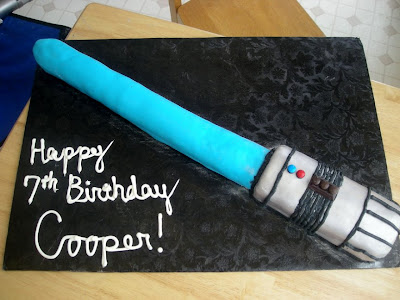 Alvis (Matt) and his wife Natalie came to the party. They weren't planning on it but then Alvis told Austin that his wife was really gettin the baby bug and she wanted to hold Isaak. Turns out, I think it's ALVIS who has the baby bug because he snatched up my Izey as soon as he woke up and he fed him and loved on him for quite a while! Hmm...
It was cute though, Natalie seems totally cool!! 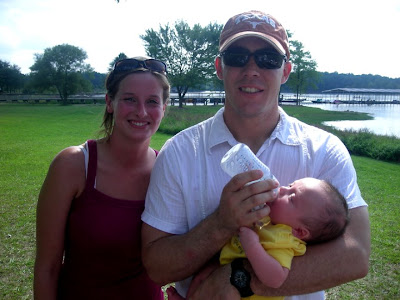 And FINALLY, here's the Jessica/Jessica a.k.a Bonnie.
She's a cutie right!? You really need to meet her for the full effect cuz her personality is really fun and laid back BUT, do y'all think she's a mix of the 2 J's looks wise? 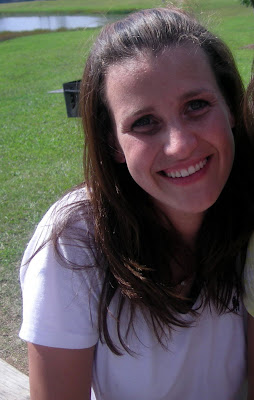 Posted by Jessica the Jacked LDS at 7:24 PM

Ok so... i look like crudola! I have crows feet and huge bags under my eyes! I am going to assume that the camera operator totally sucked as opposed to the subject looking like poopoo!

I think it turned out good. Fabulous, even. And i will refrain from making any raunchy comments about making it for any upcoming bridal showers/bachlorette parties.

The Jessica/Jessica is very cute.
love you and I like the way the cake turned out also.
mutha

The cake turned out great, way to go Jessica! And we finally got to see the Bonnie that we have been hearing so much about to boot!

Tell Bonnie to quit being a baby...not everyone looks like GOLD on camera (hello! i take the WORST pictures!!!) but that you can totally tell how cute she is in person. And yes she is definitely a hybrid. And the cake... NICE. I'm really proud.... however, i will say that the tip of that light saber looks a bit... questionable if you know what i mean. hahaha Oh...and issak? oh i cute... i just stared and stared at that picture... i wish i could make a little animation of him just breathing there like he was sleeping... how tender. I can't wait to hold my little person.

PS. i just found another picture of bonnie on another blog (stalking, ya know...) that you have listed and she is WAYYYYYY cuter than this picture you posted... i'd be mad if you posted this one of me. She's SOOOOOO much cuter than this!!!

Opps! I did forget to mention the playdoh part, so sorry! How did it taste? Better than the Micheals nastiness I hope. It looks FABULOUS and I think you win the best new friend award despite the picture :)

Awesome cake! Congrats, you've totally inspired me. I'm always afraid of frosting so I'll have to take note of your tips. Sorry I could not partake, but I totally know why you didn't try it either. I often feel the same way about edible creations. Looks like it was a good party! And whatever, Bonnie looks very cute.

oops. Typo. about MY edible creations. (couldn't just let that one slide)

Questionable light sabers? I think you'll have a new business in no time. Imagine!

Cute cake, and I know what you mean with the fondent. I used it on Tyler's cake last year and it's not fun.

YEAH!!! More cake success. Looks great! And, if I were you, I'd put an electronic tag on Isaak before you handed him to Matt the next time. I'm with you, the look in his sunglassed eyes tells me he's about to use his Marine skills to take off with your little hunk of lovin'.

First of all, you were SO RIGHT about blowing that picture up. That is one cute little monkey, Jessica.

Second, your cake rocks! I am SUPER impressed with your mad skills!

Okay, I'm totally late in posting. It's good to finally see our hybrid in the flesh! Thanks for the pic.

Your cake looks fabulous. You are such a nerd for not trying it. I'm sure the taste was as good as the presentation, and then you could have smugly reveled in your superior creative powers and ability to pull off the impossible. (Yummy fondant)

I noticed that you mentioned Izey as the last...didn't we already talk about this? You must have made some decisions without telling me!