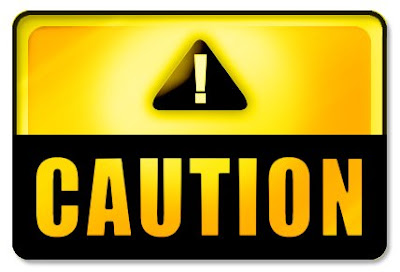 Well, I've done it again. I've committed to doing something I KNOW will stress the CRAP outta me, BUT for a good cause. So Bonnie's son Cooper turned 7 about a week ago. They aren't from Virginia so sadly, he had no party :( You all know how I feel about birthdays and how they should TOTALLY be rocked out, well... Bonnie decided to have a celebration this Saturday at the Lake on Base. I got so excited about it that I committed to making him a Star Wars Light Saber birthday cake since he's totally into Star Wars right now . We found a really cool cake online and now the creation and creative juices are flowing to make this a freakin awesome cake for the little dude.
If you're an avid blog reader of mine you KNOW the stress I go through every time I have to make a cake. I think about it, dream about it, talk about it, rehearse it, plan it, and then dive in and hope all goes well. Remember the treasure box cake experience for Jake's 7th birthday party? Yeah that's right, the one where I SWORE I would never make another birthday cake EVER again? (don't let this post scare you Bonnie). I sure didn't keep that promise (don't worry I didn't peacock) because not too long after that I attempted the whole cake thing once again when I made the dinosaur cake for Kora's 5th birthday. I loved that cake so much I wanted to keep it and it was SOOO fun to make that a few months later I made the skateboard cake for the boys. Not too shabby, I was proud I actually pulled it off.
SO, you know my history with cakes. I told Bonnie that I am NOW entering the stress zone and I made her promise that she wouldn't hate me if things went terribly. She promised. Here's the cake we found online... 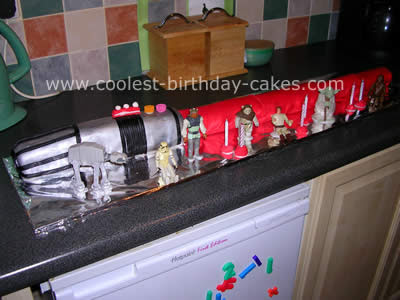 I won't be putting all those figurines around it, just the saber itself. I think I'll do a blue one because Jake tells me Cooper likes that one.
Now here's the complicated part.
The cake is actually a cake ROLL, which I've never made. I've SEEN my mom make one, does that count? I'm making the roll a chocolate cake with cream filling...mmmmm. If it turns out, it'll be yummmmmmy.
Next, the frosting. Yeah, not so much frosting. I didn't realize it but the cake is covered in fondant. Ugh. Stress. When I read about the cake initially I didn't notice her saying anything about fondant. Well, that's because she called it "ready to roll" frosting. That's just pre-made fondant you can buy. Honestly, the cake won't look this good or even AS good if it's not fondant. AGAIN, never made, let alone worked with fondant. I went to Michael's today and bought the ready to roll they have just to try it out. From everything I've read online, fondant isn't that yummy so I wanted to do a taste test before I smothered poor Coopdawg's cake with fondant. The ready to roll was nasty. I even tried flavoring it with vanilla and then almond and STILL, bleh. SOOO, I'm being SUPER adventurous and I'm going to make my OWN fondant so it's yummy. I'm not gonna make a pretty cake just for people to look at and awe over. NO. I LOVE cake and if I'm gonna make a cake, it's not only gonna LOOK fantastic, it's gonna taste like freakin Heaven!! (i hope)
I found a yummy SOUNDING recipe online that gives the fondant a buttery taste so I'm gonna do a test run tomorrow (see how obsessed I am?). I'll let you know. If that fails, I may go with the marshmallow fondant (but I don't really want to) for the sake of at least finishing the cake.
I started stressing to Austin about the fondant and the cake roll and he said, "Jess, I think you LIKE being stressed about making the cake. I think you LIKE the challenge." Truth is, he's right. I DO like it. It's kinda like Princess Parties - I LIKED being stressed when I had to write new programs each year and plan new games or add a new character and make her look perfect to a "T". I liked knowing I was the best in DFW and I always had to revamp and add more to STAY the best. I do. I LIKE a challenge!
So Bonnie, you're probably reading this thinking that it's really no big deal and if I'm this stressed about it I don't have to do it but NO. Don't think that. I really WANT to do this. I LOVE being creative and stretching my limits to be better than the last. Now if I fail, I'll feel horrible and I'll probably grovel at Coop's feet on Saturday begging for him to forgive me for letting him down. BUT, if I do good and it turns out, I'll be so hyped to try something BIGGER and BETTER next time! SO thank you for giving me the chance to excel!
OHHH, and any tips regarding cake decorating, cake rolls and fondant would be greatly appreciated. At least until Saturday.
Wish me luck!
Posted by Jessica the Jacked LDS at 8:55 PM

Wow. You're BRAVE. I love baking, but would never never attempt anything with fondant. Perhaps I should take your lead and be more adventurous and get out of my comfort zone...

Scratch that. You're crazy!

Wish I had some advice... can't wait to see how it turns out. Judging by the dino and skate cakes, it's going to be awesome!!

I was watching Ace of Cakes and I told Andrew I wanted to work there. He laughed and said, "What would YOU do?"

TO ALL FRIEND'S & FAMILY OF JESSICA: I am just gonna preface this comment with: I would never ask a NEW friend to attempt this, this was ALL Jessica's idea... I'm along for the ride!

Now that you have totally made me out to be some mooch that has conned you into doing this overwhelming task, I wonder what your friends think!
Anyway, I know that the cake is gonna be awesome and to be honest, whether it tastes good or not; Coopdawg is gonna be excited! Now I just need to follow you around forever, because all other cakes, I'm sure, will fail in comparison!

Wow! So many talents! I had no idea you were a cake maker. I'm so excited to see the final result.

Okay no I posted first yesterday the cake wrecks has NOTHING to do with you! And I'm gonna dig up your # cause I have the simplest most easy and good to boot fondant recipe.

You will do a great job as you do at anything you put your mind to.

That bonnie is a mooch!!! what kind of person would make a new friend DOOO something like that!!! ha. just kidding. oh and the fondant... i have to say... if you make fondant that ends up tasting good, i'll need that recipe. I've always wanted to do fondant but it makes me wanna pee my pants. Good luck... ps. i know the adrenaline rush you get from being stressed... i get that too. okay peace out.

Jessica I am SO THE OPPOSITE of you in this! I do not want to be stressed at all! And I do not like making pretty cakes! I wish you lived in my neck of the woods and I'd let ya stress over making P a cake! LOL!