Last night Kora and I were laying in bed watching TV and a commercial for Palmer's Cocoa Butter Formula came on. You know the one where they show the pregnant belly with stretch marks and tell you if you use this product they will all "just disappear!!" Well Kora said, "You're pregnant mom!" I said yep... She said "But you don't need that stuff because you don't have skid marks on your tummy." I about fell off the bed and died, it was hilarious. She says the funniest things. Like one time when she was telling me and Austin that he was my husband and I was his "LIFE" not wife, "LIFE". Austin was laughing and saying, "no no no". Hey, she can't help it if she knows what's she's talking about!

We went to the spray ground today with Natalie and Zane and even though I brought my camera, I didn't think to take a single picture - retard. So I stole this one of the Rockwall.com site so you can at least see where we were. Kora invited Maddie and Miah had Zane there and they all had a blast. It was a little chilly at first but it warmed up quickly. Natalie and I got interesting and uneven sun burns so now we're lookin sexy for Summer.

I took this picture last night after the skid mark conversation. My two sleeping beauties cuddling each other. Here's a Roscoe picture for you Austin! (he's been missing his dog) He's really not that huge but this picture makes him look gigantic. Or maybe he IS and I'm just used to him? I don't know but he really IS that fuzzy and cozy to cuddle with!! 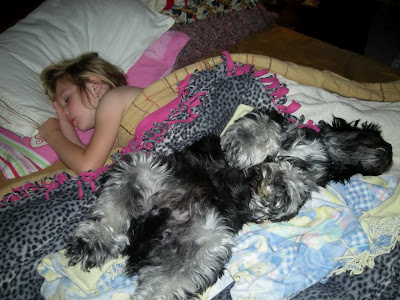 Another WONDERFUL thing that happened was coming HOME from the spray park and seeing THESE flowers that Austin sent to me for Mother's Day!!! I love them and I LOVE the boy who sent them to me!!! MMmmmm Tulips....Thank you lover! 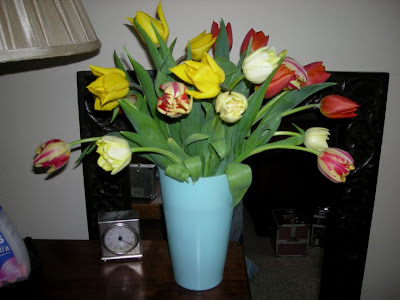 Posted by Jessica the Jacked LDS at 2:55 PM

I love tulips!!!!! And I can't even tell where the face is on your dog!!! He just looks like one big ball of fluff!

I wish I didn't stretch mark so DAMN VERY VERY bad. It's hideous. Honestly, I think it contributes to my depression. It is taking a lot not to totally give up on my body and die.

Lucky, there are things like tulips to distract me and a husband that still loves me even if I'm a monster.

Looks like someone loves you too. Happy Mother's Day!

P.S. Skid marks, while stinky, would be easier to get rid of.

Skid marks. Ew. Beautiful tulips! That was so thoughtful of Austin.