Ladybugs who eat raisins and then a haircut

Last week, Kora was outside bug hunting and found a couple fun little creatures. She was so excited about finding them that she made a home for them in a Tupperware with grass and stuff. One of the creatures she found and caught was by accident. After she gathered the grass, she realized she had collected a small snail. 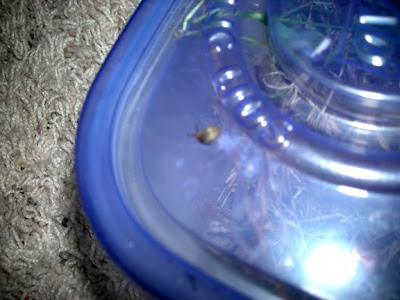 The grass she was gathering was for her prized possession, her new ladybug. She ran upstairs huffin and puffin I could barely understand her. She needed me to get on the internet and answer all these questions she had about ladybugs. She needed to know what they eat, how they drink and what she could do to make her habitat more comfortable for the ladybug. We found a website that explained she needed a damp paper towel for the bug to drink from and then maybe some wet raisins for her to eat off of. Kora didn't waste a second getting everything prepared. Each day, she changes the paper towel and reminds me, "Princess Rainbow drinks a lot." That's what's she named it. The funny part is that Princess Rainbow is always sittin on top of those wet raisins and is loving them I think! Kora took these pictures of her bugs. I like her foot holding the Tupperware so she's "hands free". 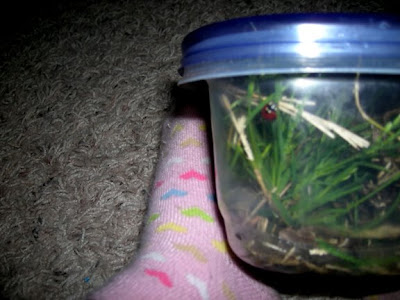 Today when we got home from running errands, Kora decided that she needed to give Miah a haircut. Not a real one, just a pretend one. She got some playdoh scissors that don't really cut, a comb, a towel and a spray bottle for the job. She kept yelling at Miah to sit still and stop wiggling and he was getting SO annoyed with her. He sat there for almost 30 minutes while she combed and cut what little hair he has. Finally she let him get up but she warned him, "Now Miah, I gave you that nice haircut but if you bug me and copy me then I'm gonna make you bald." If I were Miah I wouldn't test her, she's pretty good at following through with her threats. 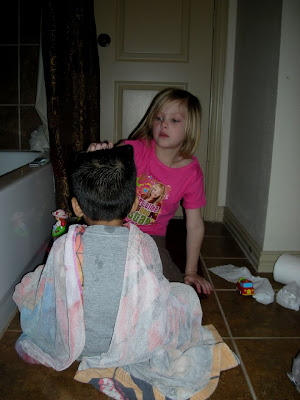 Posted by Jessica the Jacked LDS at 5:00 PM

Kora totally reminds me of myself growing up! A bug loving tomboy yet prissy and sassy and bossy! I always loved playing dolls, dress up, etc. with my younger brothers and funny enough, they ALWAYS went along with it!

Kora will be one great and powerful mother, that's all I can say. And I'm glad she won't be mine. I couldn't handle it. Miah is a trooper!

We already know we are BOTH bad moms. Thanks for reading my blog, too. It makes me happy.

Miah reminds me of Enos...because he was a sweet soul who would do anything for his sisters and brothers. sweet miah :) I love that Kora named her ladybug princess rainbow... it made me wanna laugh out loud and then tell people... but who would i tell here at work? exactly... i'll keep it inside until i get home so i can tell Enos.