Have you had enough pancakes?

So my poor children were forced to have pancakes AGAIN for dinner tonight. Every since being pregnant, I've had an overwhelming desire to gobble up stacks and stacks of pancakes for every meal possible. I think they're my favorite meal EVER. The only thing is, they can only be MY pancakes, if someone else makes them, then yuck. Kora dropped out of the pancake meals months ago. Jake slowly fades in and out depending on his range of hunger. And then there's Miah. Funny thing about this boy - he used to eat anything and everything in sight when we got him. I think Kora has been a bad example to him showing him that you don't HAVE to eat everything if you don't want to. The only thing he will still eat TONS of, IS pancakes. He's loved pancakes since before he lived with us so I think they're embedded in his memory as pleasant and comforting. So Miah's LOVIN the pancake meals.
I'm pretty sure that it's these pancakes meals that have attributed greatly to my large rear end, fat arms, rubbing thighs and back fat that rolls over my bra almost covering it completely. They are, of course, filled with carbs and more carbs, tweaked with two teaspoons of vanilla, slathered with butter and then drowned in gobs and gobs of syrup. But who cares, right? They're delicious and I know Isaak LOVES them. So really, I'm doing what's best for him.
All in all, I know I haven't had enough pancakes.
I'll see you tomorrow my precious stack of golden bliss. 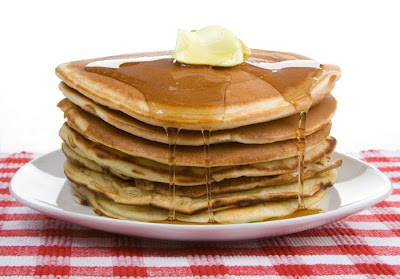 Posted by Jessica the Jacked LDS at 5:04 PM

I love pancakes, too! Or, as they are called around here, pan-a-cakes! I have my own recipe that I can't live without, but I am going to try a touch of vanilla in it next time. We rarely have breakfast for dinner, which is weird because everyone loves it. I probably avoid it because it's the only time I even attempt to get my kids to eat veggies...

Oh, and I love Isaak!

I have been LOVING pancakes too!!!! But I always make eggs to go with them--cause if I don't eat my protein I just feel awful! I LOVE the name Isaak!!!!!

I did the same thing, but on MY pancakes, (not the kids), I smothered them with real butter, (I added vanilla to the syrup), and topped with whipped cream. I was in heaven! I would add a little extra maple flavoring to the syrup as well, to make it sickenly rich. :)

Maybe Isaak has a bright future at the International House of Pancakes. . . hey, maybe you do to!