The Brothers Birthday - A Success!!

Phew...it's all done!! Am I the only mom who feels that way after a birthday party? It's like, okay, now I can get on with my next project or whatever else I have going on. OH, and I lied. I couldn't wait to get the pictures up so here they are only HOURS after the party. Am I on the ball or am I on the freakin BALL!!?! Oh yea!
So the party started out nice with nuggets, hot diggety dogs, queso (yum), fruit salad and chips. We all ate until Mr. Mike, the man with the animals, was ready and all set up. Then all the kids and most of the adults moved to the garage for the big show!! Here are the kids meeting the FIRST of many creatures...the centipede! They look all nicely seated and calm in this shot, but after the first couple creatures, they were hovering around poor Mr. Mike SO closely with excitement. Miah wanted to SEE all the animals and insects, but he didn't want to touch very many. He kept saying, "I already did" when I would ask him if he wanted to hold it. Everyone else was all for holding and touching them and Mr. Mike would let them hold almost every thing he brought. Before I continue, let me just give props to Mr. Mike and his crew at PARTY PETS!!! He ROCKS and was either AS good as he was 2 years ago, or BETTER. I'm serious, I would refer him to anyone anywhere! He travels all over DFW and is super affordable. He'll stay for about an hour (it always runs over) and takes so much time letting all the kids have a chance to see what he brings. This is a FANTASTIC idea for almost ANY age, I'm serious!! Look 'em up in both the Dallas and Fort Worth Child Magazine. I don't have a number or website off hand, but you can email me and I'll help you locate them if you're interested! 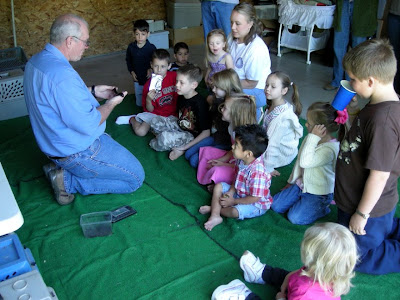 These are TOTALLY disgusting, but that didn't prevent Jake from holding THREE Madagascar hissing cockroaches...eeewwww!!! Look at Kora's face in this picture!! 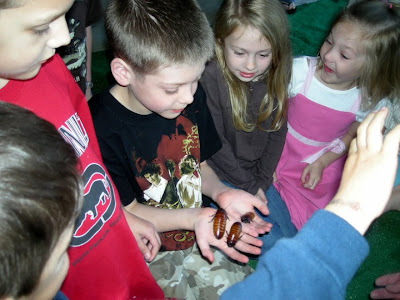 Paw Paw tried to help Miah feel a little more comfortable around the creatures. This was one of the FEW he would touch, the big 'ole honkin toad. 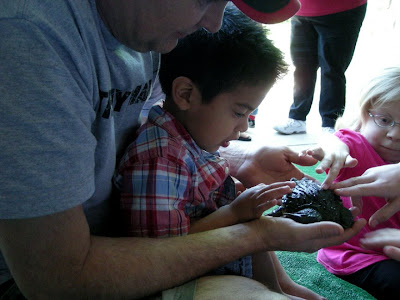 I couldn't believe how huge this turtle was!! I swear I don't remember him from last time. The kids loved him! 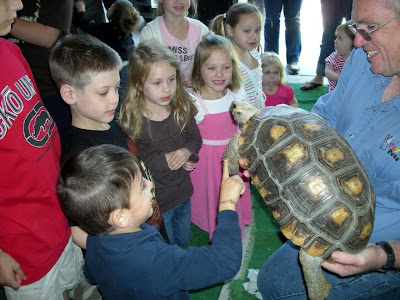 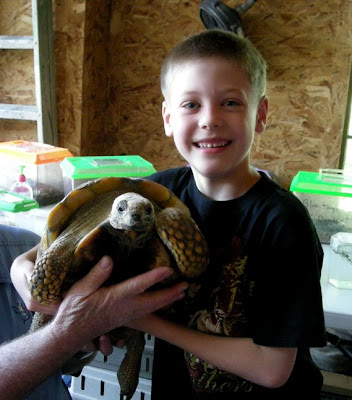 I LOVE LOVE LOVE this picture of Miah with the lizard. He looks so precious just BARELY touching the little guy's chin while holding his safety net (his bouncy ball) in his other hand. 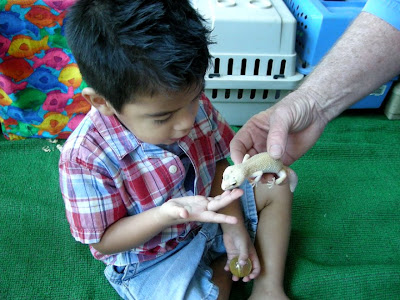 I have to say, I am HIGHLY impressed with my picture taking skills today. I don't think I just had a good day, I think it was having my sister Amy's aura (is that how you spell that?) around me that made me do good. Don't you love this picture of our friend Roman? Is that emotion or WHAT?! Even though Kamryn is a cutie patootie girl, she wasn't afraid to touch ANYTHING. She was always the first to raise her hand for a turn. Go Kamy!! 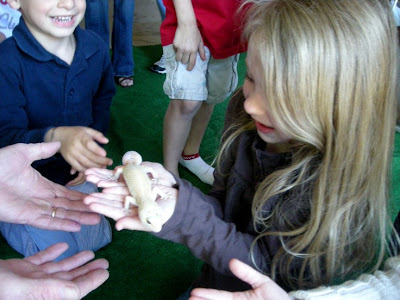 Jake tamed the snakes and then wore them as necklaces to show us how brave he is now that he's 8 (well, not technically). Mr. Mike just kept piling them on his neck and Jake's poor face was trying to be tough but you could see a little fear in his eyes! 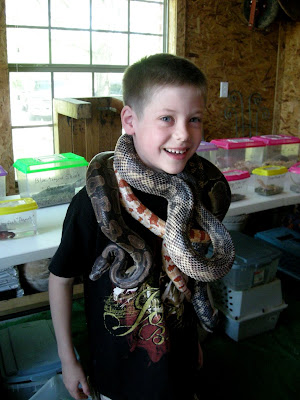 Even Kora wanted to "wear" the snakes. 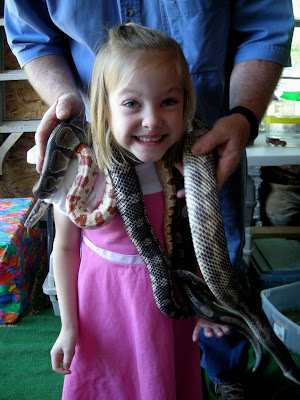 I know this bird isn't much to look at, but I love this picture because of Miah's face in the background. He's telling us that he does NOT want to hold the bird. 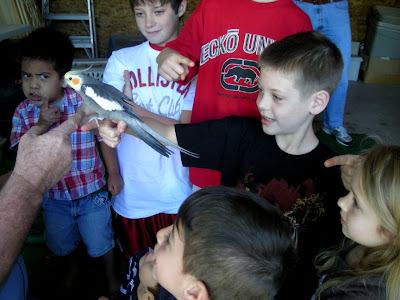 This is one of Jake's friends, Robert, holding an baby Easter chick. Mr. Mike had about 5 of these and they were all dyed different pastel colors, they were SO precious. Kora loved them. 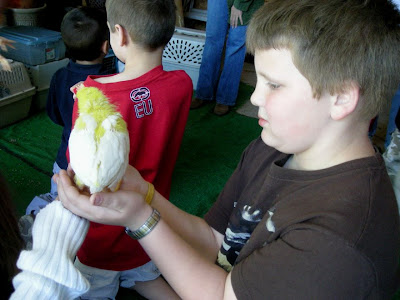 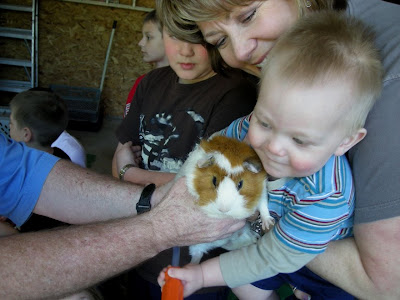 And Miss Madison had to touch EVERYTHING. It was so precious because she'd touch the nastiest things and then make this hideous face. I love her expressions!! 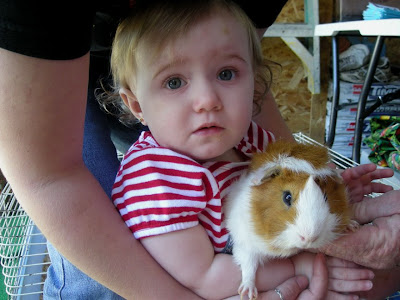 This big bunny was the last of the animals and Miss Clara was the last to hold it. She did NOT want to let it go and just sat there holding and rocking him forever. It was adorable! 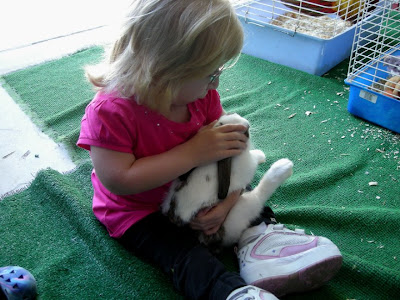 Kora wanted to hold the birds but when they got on her bare arms they were scraping her and she was freaking out about it laughing!! 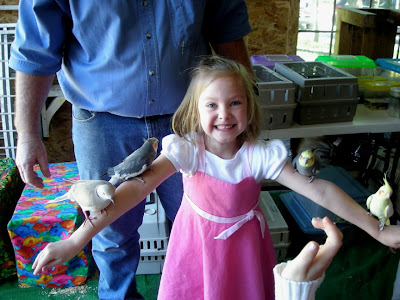 The kids loved everything and then afterwards we went in to do cake and presents. Here's a picture of the finished skateboard cake with wheels and all. Everyone commented on how nice it was so I feel good about it. Then again, they wouldn't say it's hideous...or would they? Miah loved his skateboard he got and while he was opening it he just kept saying, "skateboard, skateboard, skateboard" over and over!! I forgot to show Jake his computer he got as a combined present from us and the grandparents and he told me later that he just thought we didn't get him anything. Poor guy!! I felt horrible! During the cake someone reminded me so we went into the play room to see it all set up and he was really happy. He's like me with his emotions, he doesn't like to show them. But I know he loves it, his very own computer!! 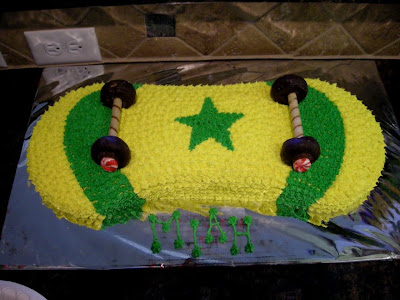 Thanks to everyone that was there today!! I know I wasn't able to talk much to everyone because I was running around like a chicken with my head cut off, but I really do appreciate you being there and all the gifts and everything!!! I love you all and I can't wait to see you for the next party!! Tchau!

Posted by Jessica the Jacked LDS at 5:43 PM

Okay, I had a smile from ear to ear as I read your blog from today. You did a GREAT job!

Looks like a SUCCESS! The animal guy looked very fun and the cakes look awesome and yummy!!!! HAPPY BIRTHDAY BOYS!

Wow! What a production! You are such a cool mom!

OK, that Animal Dude is AWESOME! What a party!!!! Go Mama!!! And you did fantastic with pics, the kids faces were hillarious!

looks like everyone had fun!! and i love the skate board cake, awesome job!

that cake looks aMAZING. i'm a proud sister. Also... i love miah's face in that picture you talked about... it made me laugh a lot. Kamryn looks so big... i haven't seen her since she was a baby... what a cutie. and Maddy... she's a little girl now.. not a baby! i'm missing out on WAY too much. I love the bird story about kora's arms.. how brave of her. And Aidan looks like a guinea pig and Jakob DOES look like that turtle... it's so funny. haha Happy brother birthday nephews!!!

I am wondering if Miah had his surgery today and how he is doing???!!

Awwww, it looks like Chloe missed out on a lot of fun stuff. Sorry we couldn't make it.

Great Pictures - You are definitely right! You always throw the best parties. I really need you here for Faith's. I don't know what I am going to do. HELP!!!

What a memorable birthday party for your boys! Great cake mama!

WOW!! You did an amazing job, Jessica! That is so impressive! Lucky boys!! Love the pictures! Thanks for posting them.