My favorite cartoon series EVER!

Okay, so if you've never seen this show and you don't have children that would demand that the television be on at all times of the day so you would STUMBLE across this show, you HAVE to FIND IT AND WATCH IT. This is seriously the most awesome, clever and fabulous show you will ever watch! I think I'm a little partial to it because it's basically the life of Kora and Jake, but even if you don't have children exactly these ages and in this same position (older brother, little annoying sister) you will still totally appreciate the dynamics of it. Charlie, the older brother gets so frustrated and so annoyed by all the crazy things Lola does and says, but you can tell that even though she drives him nuts, he loves her SO much and she is his best friend ever! I pasted the description of the show below for you to read and I'd like for you to visit the website when you have a chance so you can get a small feel of what it's like. http://www.charlieandlola.com/ Just had to share! 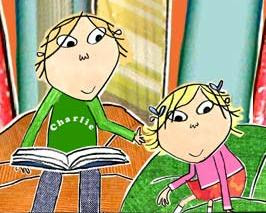 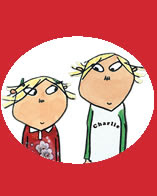 Charlie and Lola are the principal characters from a series of children's picture books by Lauren Child. The stories are all narrated by seven year-old Charlie, and focus on the antics of his feisty four year-old sister, Lola. The books as well as the television series also emphasise the relationship between closely-aged siblings.
Posted by Jessica the Jacked LDS at 9:11 AM

it reminds me of a show i used to watch on saturday mornings... it was called Science Court... the style is very similar and it was a GREAT show.. i loved it.

okay... i just watched a clip of this show and it's SOOOO entertaining... you failed to mention that the children have british accents. it's brilliant!!

We love that show, too!! It's sooooo cute! We watched it just this morning. I don't feel well so it's a TV and movie day! :)

I love that show, it just makes me happy.