1. Austin started his new job on Thursday at the recruiting office in Arlington. I don't know if I told anyone, but his job at Bell Helicopter was supposed to end at the end of this year and the Marines couldn't take him on until March so we were stumped as to what we were going to do for mula from Jan-March. Well, our prayers were answered because the Marines got special permission to make him active NOW which is awesome! He gets his 1st Lt. salary, plus money for housing and food AND insurance for all of us!! yipee!! We will be moving in the beginning of May so we'll be staying put here at my parents house, but the extra money will definitely help in getting out of SOME of the school loan debt we are in.

2. Austin looks sooooooo cute in his Marine fatigues coming home from work! It's been over 3 years since I've seen him in it and I had forgotten how handsome he is :) woo hoo!

3. Jake and Austin left for Abilene today for their weekend hunting trip. Jake was SO excited, but sad to leave me. He's REALLY family oriented, like beyond normal and he hates when one of us leave even to just run to the store. He worries too much for his age, but I'm glad he loves him family so much.

4. Miah is feeling much better, just has a yucky phlegmy cough now and constant drippage from the nasal area.

5. Here he is with the new tool bench that my parents got him for Christmas. He finally felt good enough to play with it! 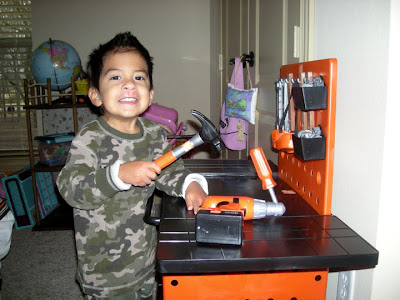 6. Jake got this magazine called, "Life Story, Miley" which is 100% about Miley Cyrus and Hannah Montana. It has tons of pictures in it of her and the people on her show. I keep finding this little man in this position on the floor staring at Miley Cyrus. I asked him if he was in love with Hannah Montana and he just smiled really big and said, "NooooOOoOoOo!" I think he is having his first crush!! 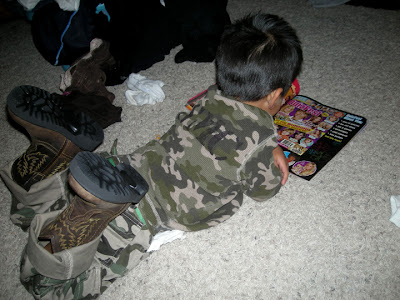 7. BTW, the outfit he's wearing is from my Aunt Marian and Uncle Charles. I think it's supposed to be Pj's, but he always wants to wear it out so that's what we do! The front of the shirt has "USMC MIAH" stenciled on it which Charles did him self and it's so cute! Miah feels like Daddy in it!
8. I don't have any parties this weekend so I think I'm going to brave Chuck E. Cheese with the kids tomorrow...yes, I know it's Saturday. I already promised I'd take them so I have to keep my word.
9. If you haven't tried the strawberry lemonade at On the Border, GO! It's so delicious!!!!!!
Posted by Jessica the Jacked LDS at 8:39 PM

Ok, those pictures of Miah are just too adorable!! He seems so precious! I hope Jake and dad have a great time on their hunting trip!

Miah is very cute! YOu will have to give a full report on the hunting trip! Glad to hear about Austins JOB!

heheh... i love that about miah... And about Mica... yes, she really is engaged. They will probably get married in June.

Hooray for new jobs! I'm so happy for you that the right things seem to be falling into place. I can't wait to find out where you will be moving to in May. Miah is too cute in that outfit. Makes me want to go out and get one for Ethan and Luke...do you think I could find cowboy boots in So Cal? ;)

that's so funny the boys like Hannah Montana. Corinne just bought her wig at Claire's. I saw ur princess dolls you bought for the hospital kids there too!

That is just so awesome about work, even with the things one can complain about, it's hard to beat military bennefits, this is a perfect time for you to be covered too. Glad Miah is feeling better! So when are you going to post pics of your cute self in tight little tummy-fitted clothes? btw-May 31 is Mica's wedding date.