Christmas at the Lowe's

Well we made it through another year! Santa was good to everyone and more generous than we could have ever imagined. It started on Friday when Austin and I went to get a new car. Well, not a NEW car, but new to me...it was used. We had a friend of a friend help us at the Greenville Pontiac, Buick, GMC dealership. We had already picked out the car we wanted before we got there from their website online. It was EXACTLY what I had before, but one year older and it was silver. I'm not a big fan of silver, but it was affordable and pretty much the best option for us at the time. When we got to the dealership we were quickly disappointed because or sales guy informed us that the one we wanted, had been sold. BLAH. He told us they had picked another one for us to look at that was similar to the one we had chosen before. I didn't even want to see it, I was pissed. To my sweet surprise, it was more of a blessing than bad luck! The "other" one was first of all, my favorite car color...WHITE! Just like my old one, I was liking it so far. Then, he showed us the inside: leather, GPS, Sirius Satellite, DVD player, heated seats, you name it, this car had it! It was the limited Dodge Durango, the one with a Hemi! I couldn't believe my eyes, I was LOVIN this car but I knew it HAD to be too good to be true. I asked him what year it was...2005, just like the silver one we had picked out. What was the price.. I knew this would be the killer...NOPE. It was the SAME price as the silver one we wanted that had NOTHING in it. The ONLY difference was the mileage. It had much more miles on it, but it was actually BETTER as far as the age when compared to my old Durango which had a BUTT load of Princess Parties miles on it. This was the dream of all dreams. Before we went to get the car thinking it would be the silver one, I told Austin I REALLY wanted a GPS and DVD player in my car. He told me that there was NO way I could get it because it was just too much more that we couldn't afford. I honestly didn't think it would happen, but Santa really DOES exist and I think THIS CAR was his present to me :)
On Christmas Eve, we left Santa some milk and cookies (chocolate chip of course) and Jake filled a cup with some oatmeal for the reindeer. Jake, Kora and Miah wrote him a sweet note and everyone was in bed AND asleep by 9pm. When the kids woke up, we started opening gifts! All three of the heathens got cowboy boots and they LOVE them. They've been wearing them non-stop! 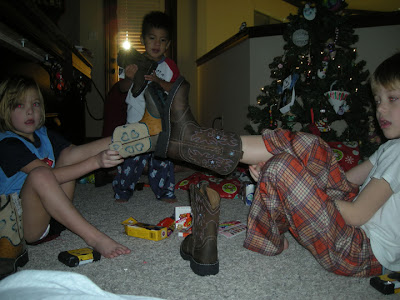 Santa left the kids a note telling them that their last present to open would be the one with a note inside. When they opened it, the note told them to go look in the movie theater. To their surprise, they found two big bikes and a motorcycle for Milo! They were ecstatic!! 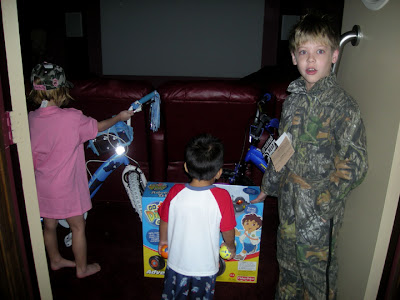 I think Jake's favorite present was this hunting jumpsuit he got. He and Austin and going hunting this weekend with a friend and he can't WAIT to wear this getup. 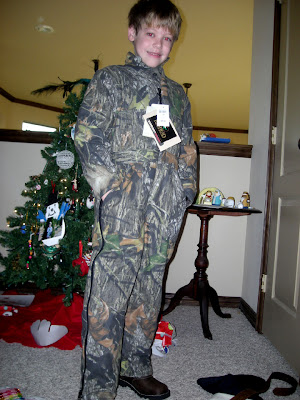 Miah woke up SUPER DUPER sick and very lethargic. He wasn't too into the present thing, or at least not as excited as he should be. I think the only smile I got from him was when he saw his motorcycle. 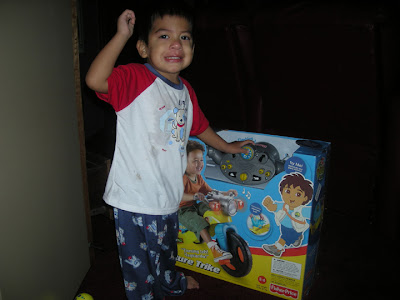 Here's me and my cousin Michelle! My two sweet sisters celebrated Christmas with their in laws out of state so my cousin made sure I didn't feel lonely without them :T
Please ignore the chubby that's overtaking my cheek and chin area...not cute, I know. 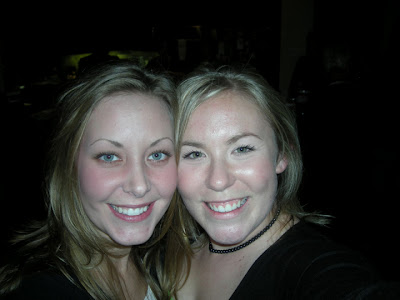 Kora's favorite gift was probably her baby alive, or baby "a lie" as she calls it. It eats baby food and even poops!! Who could ask for more?! 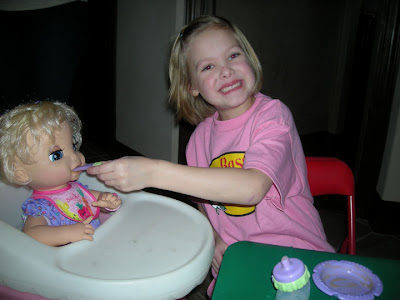 Miah was M.I.A. most of the day sleeping because he didn't get a DROP of sleep the night before. When he DID wake up, this is how he looked. Usually curled up on the floor and very sad looking. Poor baby... 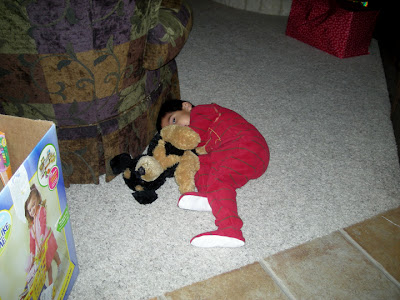 The kids got almost EVERYTHING on their lists, it really was perfect! Now it's time to get ready for the new year which should bring some pretty HUGE changes for our family.
Merry Christmas Everyone!
Posted by Jessica the Jacked LDS at 10:10 PM

i love these pictures... and to tell you the truth.. i LIKE the extra roundiness on your cheeks, it's quite flattering on you...the hellions look like they had a good ol' TEXAS christmas. those boots you got kora are really cute!!... i love miah's forced smile by his tricycle and jake's outdoorsman gear. i didn't know austin hunted? does he know how? glad you had a merry christmas... we did too... but i still missed you all!!!

Poor miah:( It should be against some law of the universe to be sick on Christmas! YEAH for you about your car!!!!!!

Poor Miah! and goodness, Jake looks SO grown up in his hunting gear!

Love the hunting outfits! That's great you got a new car too. :D