For those of you who are unfamiliar with the Mormon tradition "Trunk or Treat" let me explain. Each year, most wards have their own Halloween/Fall Festival where they have games and food and fun. Each car in the parking lot lines up and opens their trunks to allow people to come trunk or treatin to their car. They usually decorate their trucks really fun and cool and sit in a lawn chair as kids walk from trunk to trunk. It's really fun and the kids LOVE it. Our ward dropped the ball this year and didn't plan one so we tagged along to Mimi and David's ward to make sure we got our yearly dose of trunkin'!
This year I told the kids that I wasn't buying ANY costumes because of the abundance of costumes we already have. I told them they had to dig through our huge basket of costumes and pretty much design their own, using their imagination.
I was EXTREMELY impressed with Jake's imagination. Paw Paw bought those crazy glasses and Jake popped out the eyeballs to use for his Harry Potter costume. He used his white church shirt, his own tie, slacks and black shoes and then draped a black cloak over it. He used the cloak last year for some scary costume. With the help of PawPaw, he used the cardboard tube on those hangers that the cleaners hang your slacks on and spray painted in brown for his wand. He took his HP DVD cover to help him create the exact badge that HP wears. He drew it, colored it and then had MawMaw laminate it and glue a pin on the back. I met everyone at the party because I had parties that day and once I got there, I painted the lightning mark on his head. He did SO good, I was very proud.
Miah and Kora told Austin they didn't want to dress up (two birds of a feather...) so they just went as...well, Miah and Kora. Once I got there, they wanted me to paint their faces too so Miah got a spider and Kora got a puppy face. Here's Miah decorating his own Halloween cookie. 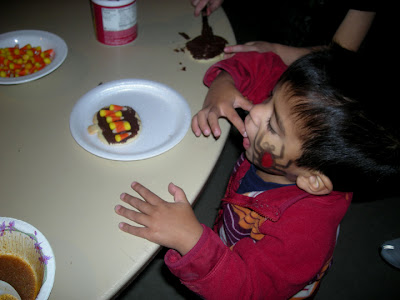 Everyone loved the cookie station, even Austin made one but I didn't get a picture of it, sorry! 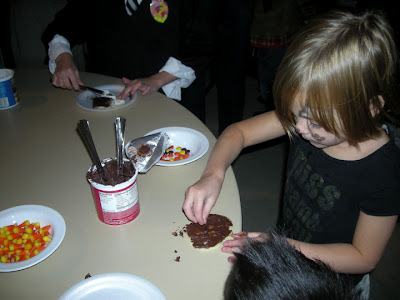 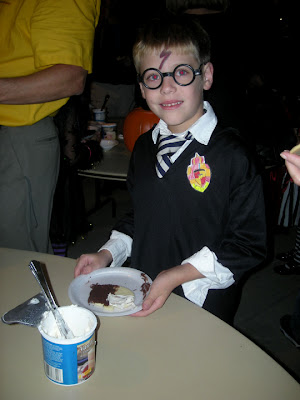 Aidan was very fluffy in his pumpkin attire. I asked David if it bothered Aidan that he was wearing tights at such a young age. From the look on his face, obviously not! 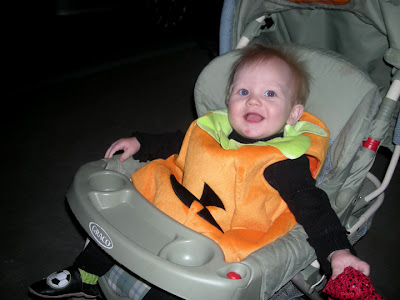 Lauren was Snow White and she looked divine! Miah saw her and said, "there's Lorlin, she's a Princess!!" 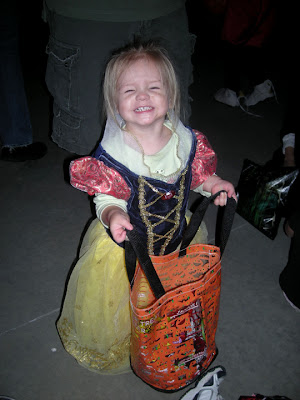 When they got home they dumped their bags out and it was time to count, divide, sort and trade! Miah still can't believe that all that candy in his bag is REALLY his!!
Ahhh...the joys of Halloween! 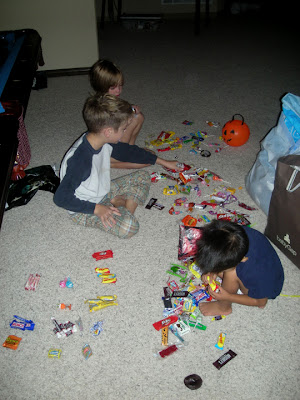 Posted by Jessica the Jacked LDS at 10:34 PM

Adorable kids:) Looks like the night turned out a success!

jake looks GREAT!!! he's so creative... that HP crest is PERFECT!! did he make it? wow.. Also... larlin looks SOOOO precious i just wanna eat her. I like how her costume is just a little too big... she looks so sweet.

Jake did such a GREAT job!!! Your kids are way precious!

I am so proud of my Jakob. He thought about the costume all day and when I was deciding to use super glue or hot glue he kept asking me "mawmaw, have you glued it yet?" We finally decided on hot glue because super glue was not working. He looks just like Harry Potter.

Mawmaw wants to also say that she loves Kora, Miah, Lauren and Aidan. You looked great also. Miah your costume looked just like you and Kora yours also looked like you. Lauren and Aidan were so sweet as Pumpkin and Snow White.

I love all my babies
Mawmaw

Laying out and counting the treasure is the BEST part of the night. Josh went as far as matching all the candies, (colors, flavors, type, etc), and lining them up neatly side by side, I'm sad I didn't get a picture! This is such a super fun time of year!!!