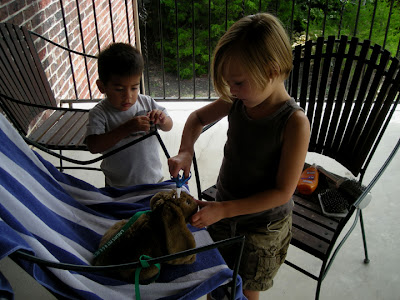 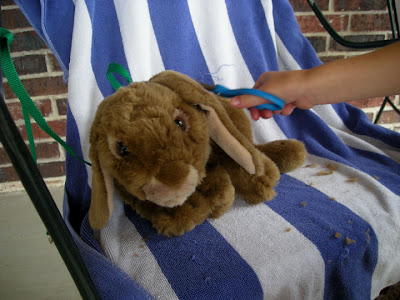 So when we took Roscoe to the groomers, Kora was all fascinated by the all the groomers in the salon each with their own table and a dog to cut and clean. She called them all "managers" and ever since then she has been BEGGING to do this to one of her own stuffed creatures. Today I let her pick one out of the hundred animals that she has, to groom. Bunny was the lucky winner today and she set him up on a chair with a towel on the balcony for his cut. We took a leash and made sure he was tied up in case the sound of the clippers made him nervous and when he was all ready...the cutting and brushing began. Kora was a true professional at work. I personally like the picture of Bunny because it shows just how much he is loving that he was the chosen animal. Can't you see the excitement in his eyes!? When Kora was all done, she brought Bunny to me to show him off and I graciously tipped her $2 bucks for a job well done. Hopefully Bunny won't brag about his hair cut TOO much to the other animals or I'm gonna be broke having to tip for each one...100 animals x $2...lawsie mercy!
Posted by Jessica the Jacked LDS at 1:29 PM

You are such a good mom, that's all I can say!