recently, my pretty friend michele, had a birthday.
she's 26 now. born in 1984.
isn't that weird?
i never thought i'd have a friend
who was YOUNGER than my LITTLE sister.
but i do.
and she's awesome.
i decided to throw her a party
that celebrated all the awesomeness that is 80's
to help michele embrace the decade of her birth.
i decorated the house to a T.
hung screen shots from the greatest 80's movies.
i bought 80's plates and cups.
lined the center of the table with retro items from the 80's.
and then invited 10 friends to join us in partying.
of course, dressed in our best 80's attire.
it. was. perfect.
or so i thought. 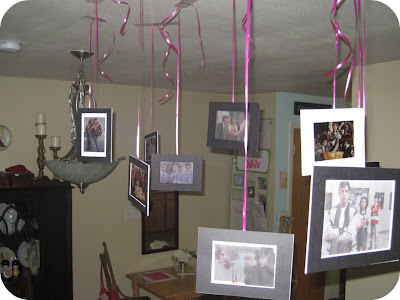 michele was the first to arrive.
she looked great and we were excited about seeing everyone else.
she posed by the sign that jake and kora made her.
hence the spelling, "micheel".
she tried to steal my unicorn rainbow posters.
but not even the birthday girl is cool enough to have those. 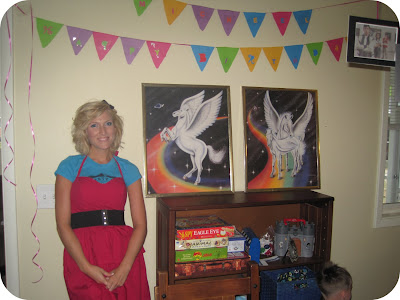 i prepared all the food.
tomato basil pizza tarts,
bruschetta,
chicken salad sandwiches,
and fruit with cream cheese dip.
rita was the next guest to arrive but being that SHE was 40 minutes late,
i started to wonder if anyone else was coming.
we sat there,
all three of us,
waiting. wondering. lonely.

then i decided to check my phone
only to see i had text messages out the butt
from SEVEN of the guests
saying that they would not be able to come.
wtc?
so we were bummed.
we COULD have sat there and pouted all afternoon... 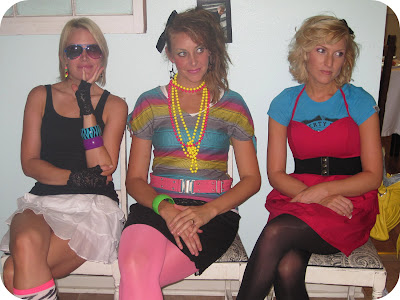 but big girls don't cry.
they don't cuh rye rye rye.
we lifted up our chins and decided that we could still rock out.
even if it WAS just the three of us.
cuz we looked freakin awesome.
and we weren't gonna waste that. 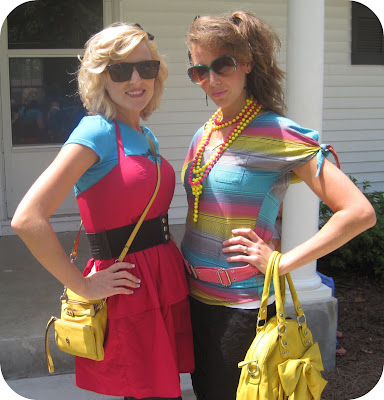 we called lover home to babysit for a tad
(during his lunch break)
and we were off on our adventure around the base.
first stop?
c-store for red bull.
oh.
and lots of stares.
don't forget the stares please. 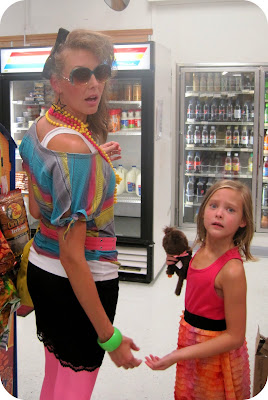 rita couldn't help herself near the claw.
i'm sure the marines watching enjoyed this moment. 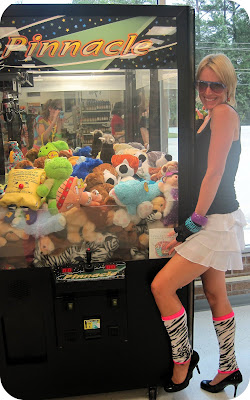 what's this?
a photo op near the ice machine?
you betcha. 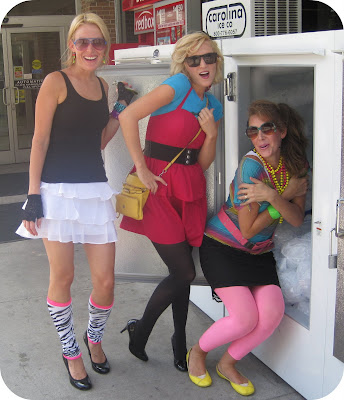 then off to the field house for some flashback pictures.
we pretended we were high schoolers in the 80's
watching our boyfriends run track or practice football.
aren't we good actresses? 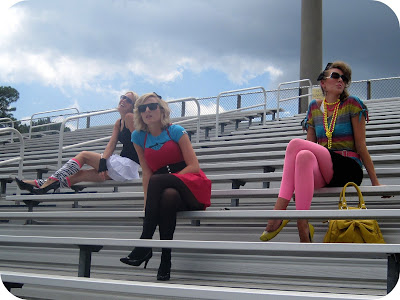 watching boys play is boring.
we needed to spice it up a little. 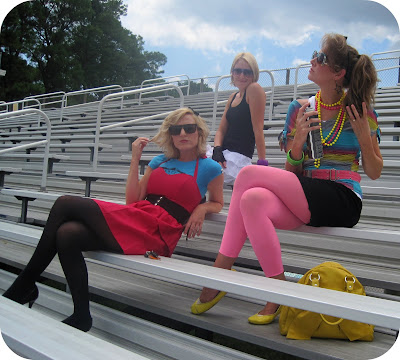 so we decided to take our band photo.
it's gonna be on the cover of our new tape coming out. 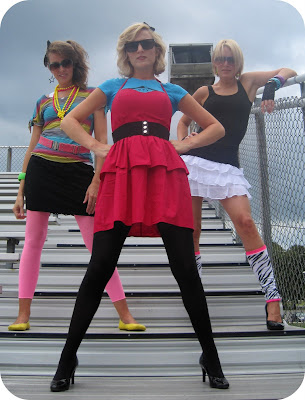 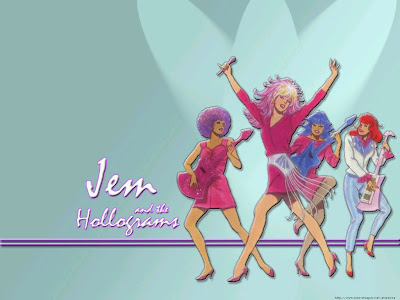 then michele and rita done lost their minds
and got mad crazy.
i couldn't stop them. 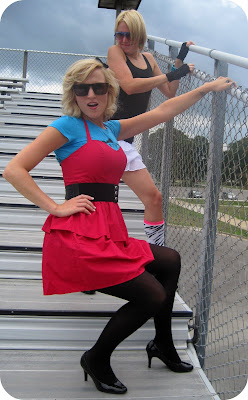 after that things just went nuts.
michele lost control of her tongue. 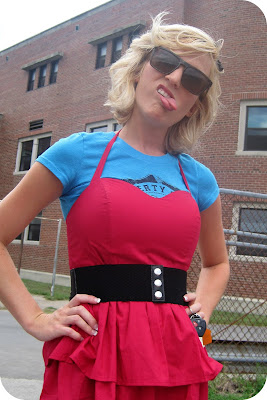 but rita still looked at sweet as ever. 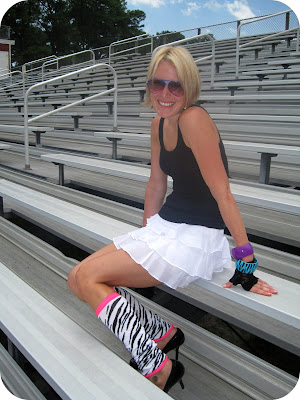 michele decided that we should all take a nice stretch on the track.
i think her red bull was kicking in. 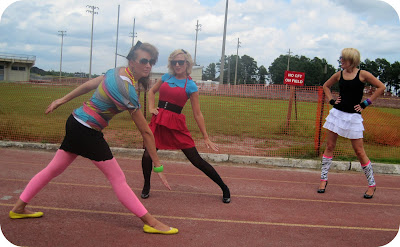 and before we knew it,
rita was off in a flash. 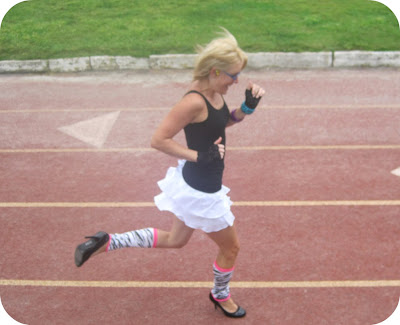 she had a nice little jog out there in her heels.
so nice, in fact,
she felt the need to flash her fancy draws.
i don't blame her.
if i had biker shorts like that,
i'd show them to everyone.

the whole day turned out perfectly.
we missed our other friends who couldn't make it,
but still had fun just the three of us.
i realized,
i sure am going to miss these two girls when i leave.
they are my best friends here :)
Posted by Jessica the Jacked LDS at 7:46 PM

YOu rocked it! I would expect nothing less.

I love it! I so wish I had been there for all that birthday radness! I wouldn't have bailed on you sexy ladies evaaa!!

Love the photos of you three in the bleachers ... I'm rolling. :D

oh my word! you guys are awesome! And I'm feeling terrible that it didn't work out for me to be there! I'm SOOOOO sorry! I'm sure going to miss you.

who would ever NOT go to such a party??!!! Jessica between the decorations and all the incredible food you mentioned you threw a GREAT party!! How fun to go out and be silly 80's chics around base, hahaha, i'm sure it was way more fun anyway.
I wish I lived closer, you girls are so fun and totally rocked a tubular 80's night fo' sho'!!! I LOVE the pics!!

Those bleacher shots were BAD! And I mean BAD in the cool 80s way.... as in NOT bad, but totally wicked cool.

I loved it!!! This is the first party that I really really really wish I could have gone to. I wish there was a karaoke video, maybe a little bit of Cyndi Lauper's "Girls Just Wanna Have Fun," or Tears for Fears "Everybody Wants to Rule the World" OR Madonna's "Lucky Star." Now that would have been rockin'!!!

oh my gosh!! You should have invited me I would have come! Its looked like so much fun! I loved your hair hehe

80's were rockin' and you whipped it real good.

HEL-LO!! Gem and the Holligrams! I loved them ;) Ha! what an AWESOME party. I'd like to see Martha try that.

Jem, who? We rocked it, and those Marines running the track knew it. Thanks for the fun day. I am still in denial that you're moving, which seems to be working for me.

I think this looks like so much fun and I wish I could have been there. Kinda sad, but I actually did crazy things like that when I was a kid. It would have been fun to recapture time. Way to make the most of a party where more than half the guests don't show!

HAHAHAHA! You girls are the coolest. I am just not as cool as you all. I would have looked like a nuclear bomb or something in my tie-dyed shirt..prego and all. You girls look AWESOME! I LOVE the outfits. I was a little sad because my hair would have rocked, but it was a horrible day yesterday. I'm so sad that I couldn't come! I literally had no energy and I probably would have torn the limb off my child who didn't sleep all night, so thankfully we had naps while you girls rocked camp lejeune. I'm so sad you are leaving. I hope we can get in one more last party before you leave!

ok so if you ever move close to me will you throw me a birthday party too? so much fun! that rita has some pretty cool shorts and leg warmers. you all look rockin'!

Like totally! You girls looked awesome! Boy do I miss the 80s!
I love the leg warmers, BTW!

This is one of the funniest posts that I have read this week! Thanks for the laughs and the flashbacks of high school in the 80s!

I have to do something like this sometime! I am still such an 80s girl.

Here from SITS! Congrats on being featured.

How much fun was all that. I love the 80's and now I so want my next birthday to be a celebration of that era (although I was born before it). Way to turn the day around.

Rock on!
I thought you guys were going to break out into a Grease mixup when you were on the bleachers even though I know that's from, like the 30's or something but that's what it reminded me of.
Totally phat!

Best, pictures, ever! I so love the zebra printed leg warmers!

What an awesome birthday party! I love the pix on the bleachers and hello!!! I thought of Jem the MOMENT I saw your band pic! Y'all are going to be famous!!!

Your photos at the track are to-die-for! If you had been an 80s band I would have, like, Totally bought your record (or probably a cassette for my walkman).

I am in LOVE with that yellow handbag with the bow on it!

What a fun party! All those guests who didn't show up missed a good time. Stopping by from SITS.

Gotta love the 80's! It looks like you guys had a totally awesome party!

I love friends I can be silly with. You rock the 80s look!

This was so fun. I would have been there!!;)

What an awesome friend you are to throw a party like that. Even if some people didn't show it still looks like you all had a lot of fun!