Behind my house, two streets back is a river called New River. It connects to the Atlantic Ocean that I frequent in the Summer time.

Both spilling out into each other.

Bringing treasures to my home.

Treasures like the one Jake found as he explored some paths as he usually does on the weekends.

I couldn't help myself when he came home to tell us the news of a dead dolphin.

This is what I walked up to... 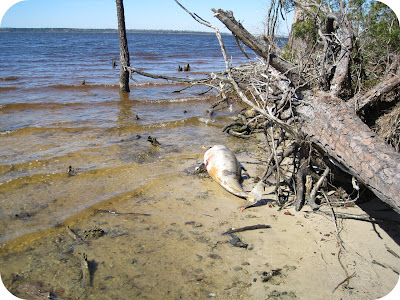 You know of my obsession for dead animals.
Who could forget the story about the cow femur and my visit to a dead beaver on the side of the road?
Or how about my dead deer that spawned my annual roadkill contest?

I was practically drooling over this find. 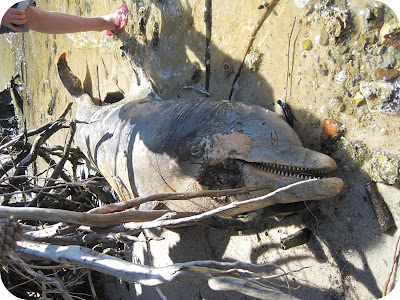 What's that?
You want a closer look?

Ok, here it is...
I had to refrain from my natural instinct to rip those teeth out and make a dolphin tooth necklace.
Or skin it's hide for a new pair of dolphin skin boots.
Go on, blow up the picture,
I won't tell. 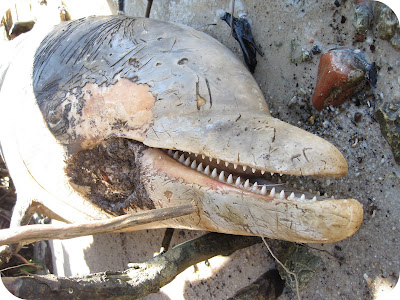 I did actually touch the sucker. I tried to flip it over but I was surprised to see just how freakin MASSIVE this beast was. I couldn't even drag it a single inch.

I still have the smell of dolphin death on my hands.
Even after two soap scrubs, one betadine doctor scub and two antibacterial lather sessions.
*gag*

I ended up flipping it with my foot and a long thick stick that I used as rope.
We HAD to see the other side.
And what doest we find?
The detectified Hussy in me solved the case.
A gunshot wound to the belly.
Orrrr...a bleeding urethra?
What is that hole? 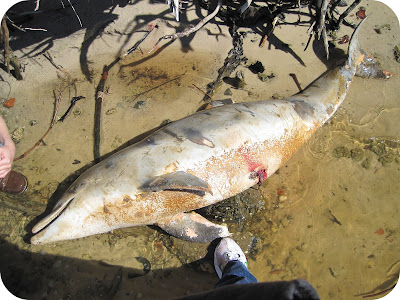 The other side still had the eyeball in tact.
Still, those teeth are calling my NAME.
I may go back and do some surgery tonight in the wee hours with my flashlight and pocket knife as the tide rises and the gators come out to play.
OoOoOoO sounds intriguing. 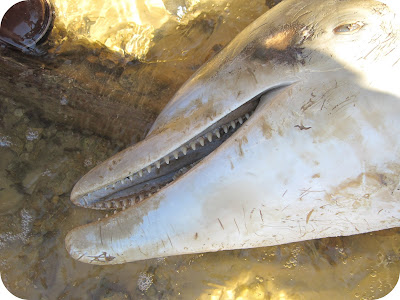 And because of this monstrosity,
I'm getting excited about the annual roadkill contest.
It's a little too soon to officially begin.
The weather is too cold and the animals have yet to emerge into the streets ready to be plummeted by quick moving vehicles..
BUT
Be on the lookout.
Take pictures.
And save them until I announce the beginning which will be April 1st.
You're gonna have to get really creative this year.
I highly doubt you can top my DOLPHIN!!!!

k disturbing and intriguing all at the same time..hilarious you have an annual roadkill contest! yuck..i'm clicking on the link, so don't beat me up and take my picture for your roadkill groupies..

Yah..your pictures are pretty darn good! When we saw it, the tide was in more...I was wondering how you got so up close to it. I think I can smell the dead dolphin through my computer screen. Bleck!

If you make a Dolphin teeth necklace can you make two and send me one? I've heard it keeps PETA away ... like garlic for vampires.

what are the odds?!

Since this is a small dolphin, it is perhaps the umbilical cord (that is the right area) that is sticking out of that hole in the belly. Maybe it died right before or after it was born. I am a dork and looked it up, and it said when a dolphin is born it is usually between 2.5-3.5 feet and about 25-40 pounds. So sad...but really cool, I mean how many people find a dead dolphin in their backyard?

Your pictures are awesome! By the time we went to see it, the tide was coming in and it was in the water. I had to climb up on the tree to get above it to get my pictures and see it good.