I know you've already seen Jake and Penny in the Bobcat, but this is a MUCH better picture so I had to re play that thought. Look how big my Penny is. Can you believe just ONE year ago (well 13 months to be exact) he was brand spankin fresh and shiny? He's HUGE now. :( 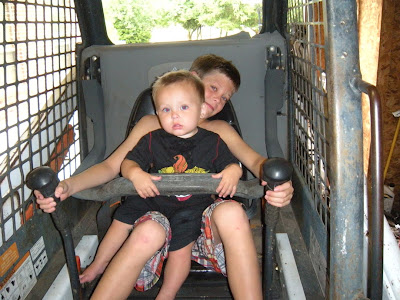 My Dad took the kids fishing in the pond behind their house which was their usual Sunday tradition after church when we lived with them. They've missed it BIG time. Especially since their mutha doesn't know how to do a THING with a fishing pole so I'm incapable of taking them in NC. Jake caught a whole bunch of fish. 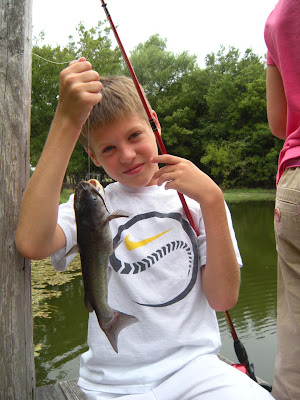 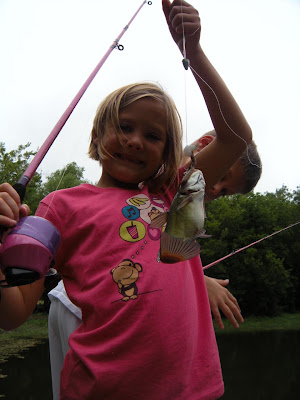 My Dad usually always uses the "Catch and Release" method of fishing but the kids ratted him out to me and said that since one of the fish stabbed my Dad in the hand and made him bleed, he sliced it in half. Anger issues? Hmm...
Miah didn't catch any and was bummed about it. Maybe next time. 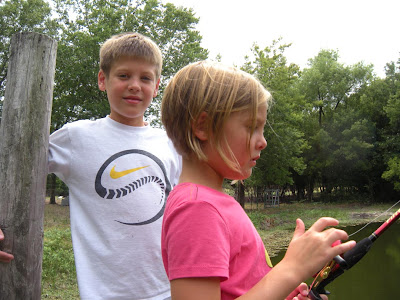 My Dad spent one whole day with Jake at Six Flags. They rode a TON of rides and just had a blast. I spent that day with the other three kids and my sister and cousin. We went to eat some yummy Mexican food, Going Bonkers (an indoor jungle gym) and then visited my sister's mansion she's having built. 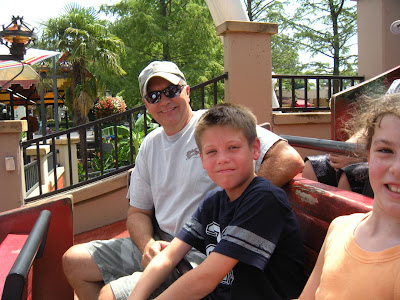 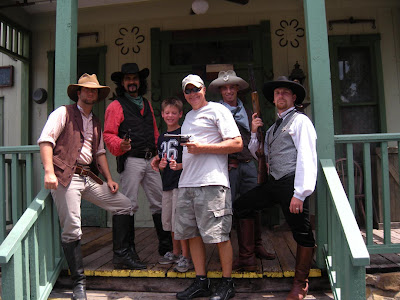 At night in my parent's pool these huge frogs jump in when it gets completely dark so the kids spent a few nights going swimming with the frogs. They would dive down to the bottom to catch them and them throw them back in to do it all over again. Look at those frog thighs! 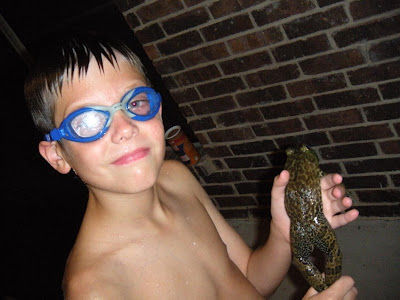 Thursday night was GNO which I'll post about later whenever Laura gets off her bootie and sends me that picture, BUT Friday night was the big swim party for all my friends and their sweet families.
This is Laura's Aidan who was very unsure about having his picture taken. Or maybe it was the fact that his cheeseburger was the size of his head. 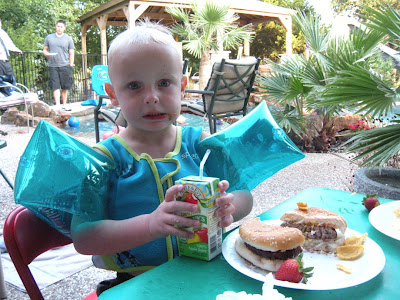 This is Kempy's baby boy Adam AKA...my new lover.
Is he not the most yummiest little guy? Ugh, I wanted to steal him. 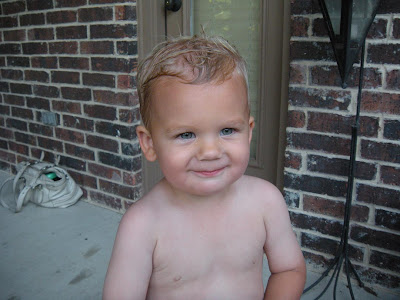 Here are MOST of the kiddos. We're missin a few babies and a few scaredy cats that wouldn't stand up on the waterfall. They had SOOOO much fun out there doing jumps and twists and all sorts of tricks. It made my heart smile to see my kids happy with their old friends that they miss so much. 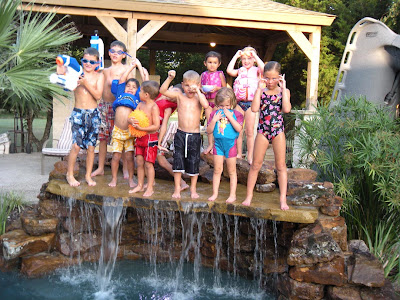 Which one of these attorneys is not like the other? Can you tell me before this song is done?
OH, maybe it's the obvious rebel in black who defends the bad dudes.
Rock on Lover. Here is my sweet friend Natalie and her little precious family. Aren't they sooo cute? She's been my friend since 2nd grade! The longest friend I've ever had! 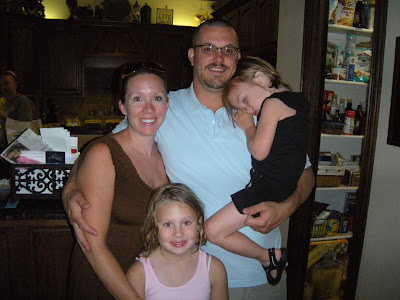 With all those heathens in the pool you'd think SOME kind of accident would have happened right? But no, because this is what the muthas looked like the whole time.
Eyes glued doing headcounts. 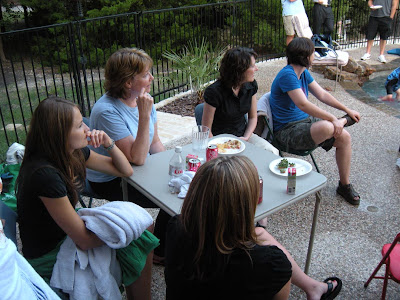 I had to snap a shot of my true love eating his cupcake. He was so passionate with it. 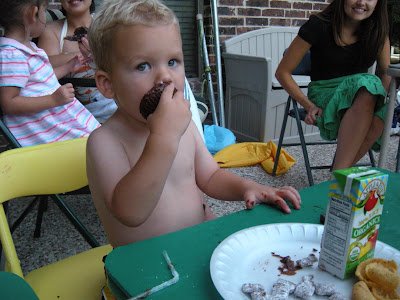 The best part of this picture is the proud Kempy Mama in the background! 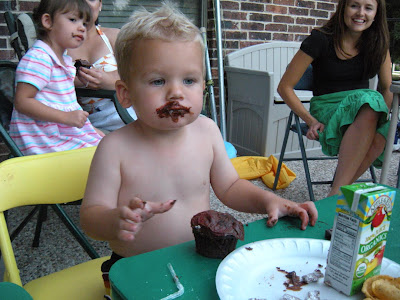 Kora enjoyed her treats with a little meat on the side. 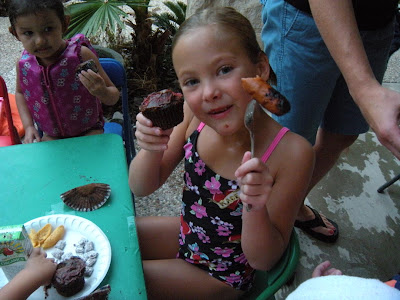 Brad enjoyed his treats in secret. 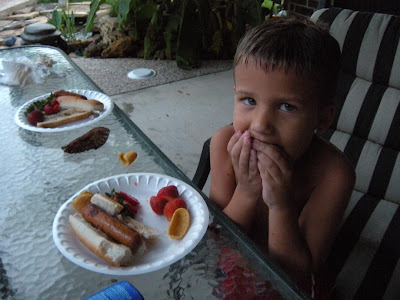 Laura pretended like she was handing out all the treats but I think she was actually eating them all. This must have been when her eldest broke the swimming pool thermometer. OR when her daughter sliced her toe. OR when one of her twins bashed his tooth through his lip. NO WAIT, it was when BOTH the twins were wrestling in the water and pushing each other under until they turned blue....yea that's it. Good job Laura. 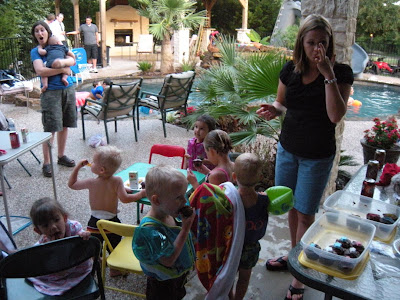 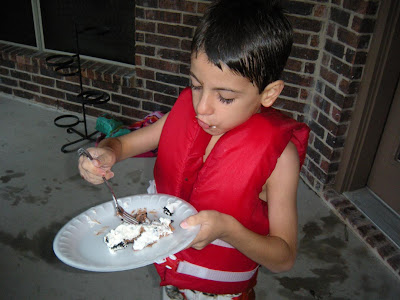 By the end of the party everyone was pooped. Even baby Dane :) 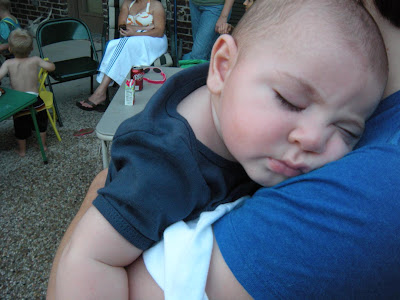 Thanks for coming sweet friends!
I loved seeing you and your families and reconnecting. Until next time! Peace out.
Posted by Jessica the Jacked LDS at 10:38 PM

Oh those pictures are funny. I like Dena's face in that one of me stuffing my face. I'll send you the gno pics now that I've gotten off my bootie.

looks like you are living it up on vacation. Those frogs are crazy...I could not touch one....yuck! I am a wimp when it comes to animals.

Looks like you guys had fun, I bet it was hard to leave all those great friends!

it was SOOO fun to meet Laura and her poopy boys (and others, of course!). and kempylu (even though i've never seen her super secret private blog, i've always noticed the cute name) with her succulent strawberries. and natalia that j lowe has told me about. and isa.... (can't believe i can't remember how to finish her name) with the 2 CUTEST girl at the party and the sexiest swimsuit for sure...you are as sweet as can be.

and, of course, great to see the georgians. THANK YOU for opening your fancy pantsy pool with the cabana!!

bonnie and amber, i was super hoping preggy girl would pull you out as a fun surprise, but, another time!

kora lou, i'm glad you made it back home without a crash!!

So much fun so little time. Loved the party. Loved the frogs. Good hamburgers and hot dogs. What great friends. Dad

What a great night! Tell pops and mutha thanks for letting us destroy their place. We should do family swim night every time you come. Having husbands there was a new element...I liked it.

Adam does look de-lish in those pics you took. What an adorable cupcake face! However, your little penny was every bit as cute with his fat leggies and sparklin' blue eyes. I can't wait to see number five! I hope he's born in a pool at home.