While Mom is Sleeping...

I've been crappy the last couple days due to a cold or flu or something that took control of my chubby body on Friday morning. Crazy crap I tell you. Knocked me right off my feet and put me in bed until like...an hour ago.
And that's only because I HAD to get up.
SO this is what happened...
Austin is gone to some party for his Colonel off gallivanting, having a grand ole time.
I'm in bed and I hear a faint cry coming from outside that sounds like Miah.
Kora rushes out to check on him and seriously like A second later I hear a blood curdling scream coming from her. She runs inside, slams the door, tears streaming down her face. She won't even talk to me she just rushes right past me, she's too much in shock.
Great.
I know whatever I find outside is gonna be bad.
I calmly hobble down the stairs in my sweats to find Miah hunched over in the driveway, tears pouring, mouth open full of dirt and blood.
Aww dang, why now?
After cleaning him all up, a good bath and teeth brushing, I can finally see that he's bashed his mouth in pretty good. That little stretchy piece of meat that holds your top lip to your gums (that I like to call your quiefer - pronounced QUEEE-FER) was sliced right in half.
TANGENT:
I had a friend named Brook in middle school who's quiefer was too short so she had to have it surgically "clipped". The day she went to have it done, me, my friend Natalie and Brook made up a song called "clip your quiefer" with a dance and all. It was nice.
Kora sliced her quiefer once by jumping on the bed and falling on her face.
Of course she did, she's done everything at least once.
So I knew he didn't need to go to the ER.
He's just one less quiefer. We should all be thankful for our quiefers. They keep our lips in tight so they don't look like this... 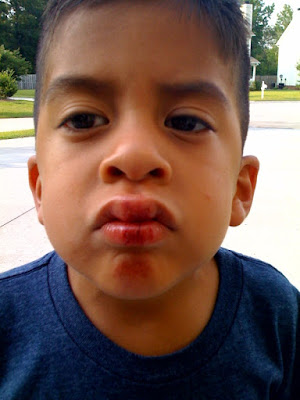 Not pretty my friend, not pretty.
He kinda has a mug shot lookin face here, huh? 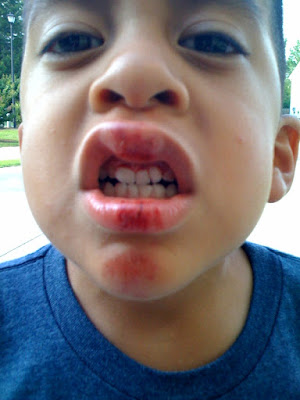 Posted by Jessica the Jacked LDS at 6:01 PM

poor guy!!! Jade is the only one who still has hers in tact. Must be a boy thing in general, to bust that little puppy in half? I hope you feel better soon! Nothing sucks more than being sick while pregnant, nothing.

Awe makes me want to kiss those big pouty looking lips even more! Tell him we love him and hope he feels better soon. Oh and I hope you do too!

:( SO SAD :( I bet that HURTS! I hope both of you are better soon. Why is it that the men always get to gallivant?

Aww.. Poor Miah! Dang! 2 out of my 3 are missing their "quiefers". LOL! And yes, I agree with Amanda, why is it MEN get to go gallivanting??

Poor Kora, could not even tell you, she hated to see her brother like that... such a sweet little girl!

OUCH! I had no idea that skin thread had a name and I have even dissected cadavors (sp?) Anyway, I answered you on my blog comment. I often wondered how that works when people ask questions there. Do they expect answers and keep checking for them? Hmmmmmmmmm As for the peacock shirt............TARGET BABY! (said in a French accent) As for your peacock story..........ADORABLE! I wish we were as cute and clever! ;)

Ok, you are cracking me up with this quiefer. Just in case you want to know the correct term it is frenum. When it is cut it is called a frenectomy. Now, I think Paddy prefers to fall on his face and has not once but twice gave himself a frenectomy!! Poor Miah!! At least he won't have a big space between his front teeth!!

OHH that looks so painfull I hope he feels better :)

Oh my gosh you are such a nerd. It's a frenulum! It's hilarious because quief is slang for the vajj fart. I know, I know, it's disgusting, but that's what it's called and you just called your babies lips a vajj fart. That is so funny! I can't believe you made a song up about it as a kid!

Anyway, poor Miah! Why does everyone alway pick on him. I'm sure someone pushed the poor baby down! Tell him that Bonnie loves him and that she'll come and get him if he no longer feels safe in your care.

That really made my Polly hurt!!! Poor sweet Miah!

Oh My Gosh!!!! Poor Miah!!! His little mouth looks so painful, I had a hard time even looking at those. His gums remind me of what Ian's looked like when he hurt his not long ago.

Please don't forget to call me if you need help this week if you're not feeling 100% yet! :)

ouch!! poor little kiddo. and to think you only heard a faint cry from him and this is what he ended up with...he's tough.

That will toughen that boy up a little. You forgot to tell us how he did it. Was he skate boarding? Hope you get better soon. Love Dad

poor Miah! He is too cute though with his little swollen lip! Hope you are all feeling better!

Sad sad! Now I'm nervous, my kids have never busted theirs but it sounds like it's pretty common! Eek!