I used to have this poster in my bed room. 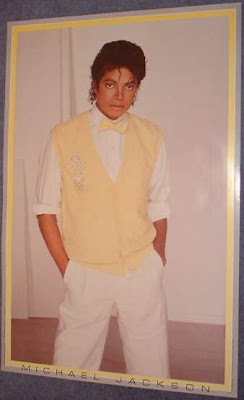 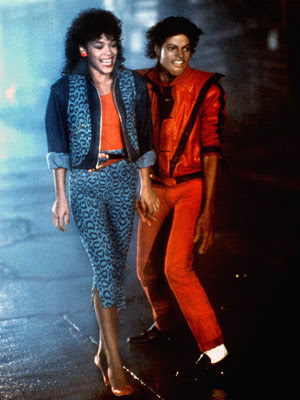 Okay so gimme a break, I was sick on Friday AND had company in town so Flashback SUNDAY it will be. And I'd save this one for the following Friday but I feel it needs to be posted soon to document the changing of events. SO here goes...

I wasn't going to do this. I told myself, don't write a blog about that, EVERYONE and their DOG will write about that...be different. But then, I was reading on Erica's blog. And of course she did a blog about this BUT she also said that the reason she did it was because she used her blog as a journal.

And she would print her blog out and keep it for her spawn to read.

And she even mentioned how BIG of a role MJ played in her life.

SO it's only fitting I express my gratitude for what he brought to this world. And so it is, I WILL blog about the death of the marvelous Michael Jackson.

I was in love with Michael Jackson from the moment I first heard him Who wasn't? I was around 5 years old when Thriller was released and it changed me. I couldn't get over his green scary eyes at the end of that video. Then came Billie Jean, Beat It, and Wanna Be Startin Somethin. He was on fire. He was my idol. I wanted to be like him so badly. I loved that he was shy in person but on stage he could rock the world...I felt like I was like that too. I had the amazing opportunity to go see him LIVE in concert with my Aunt Nana, my Mom and my Sister Amy (Lindsay, did you go too? I think u were too young?) I'd give anything to have that t-shirt I got from the concert...where are you t-shirt?

His red leather jacket became my best friend. I wore it everywhere. He had two styles of it, but I preferred the original one from Thriller with the black stripes down the front. I think I was probably close to 6 in this picture. 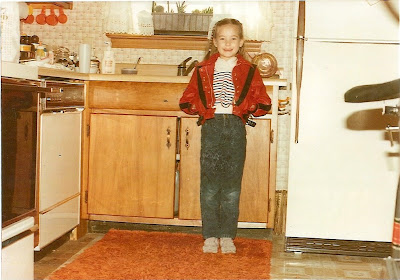 I had planned for my 6th birthday to be a Michael Jackson party and I wanted nothing more for my gift but to HAVE Michael Jackson AT my party. I dreamt about it. Prayed about it. I even sent him an actual invitation. I just KNEW he would be there, he HAD to be there. Didn't he know how much this meant to me? Finally the day came and with every ring of the doorbell my stomach would drop to the floor. Still no Michael. By the end of the party I was so sad. Why didn't he come? I even held out hope until the night time thinkin he couldn't catch an earlier flight but no...no Michael. I can honestly say that was one of my saddest birthdays ever. I remember it so clearly to this day. I can only imagine my Mutha's anguish not being able to make it better in any way. 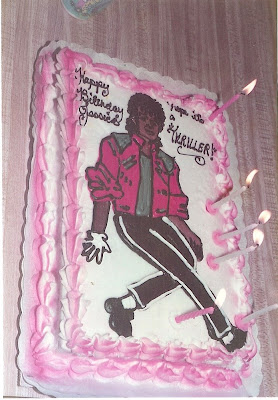 Not as sad as I thought I would be.

I wrote this on someone else's blog, but the Michael Jackson that I adored, fell in love with, and share with my kids today through his amazing songs so they too can know of his greatness, died a looong time ago to me. So much of Michael changed over the years. So much speculation, surgery and stories made him become someone different. So even though my heart does mourn, it's been mourning for long enough to ease the blow. I'll continue to wear my Michael Jackson shirt proudly as I always have regardless of what people say. Well...once my belly goes down and I don't look like Winnie the Pooh in it. Then I will.

RIP Michael.
The world loves you.
Posted by Jessica the Jacked LDS at 6:03 PM

Who knew? YOu and Michael. I never would have guessed. YOu in that jacket is adorable:)

hahah ok first of all since he died i have heard from so many pl about how they loved him growing up and he was their favorite..and i think yeah right your just saying that b/c he is dead now. Ok YOU really were obsessed w/ him...seriously i love that jacket and the whole bday party themed MJ...hahaha that is freaking awesome. I too believe he died a long time ago and really what has he done for us in the last decade anyway. I wonder what the pl in heaven think when he walked in :S. If he went there?

I remember sitting in the living room with you girls and Teresa that night he did the moon walk. We couldn't believe our eyes. Sad that he changed over the following years. You right, he was just not the same Michael Jackson we knew. Dad

I've felt so much sadness since his death, but also over Farrah... but anyway, you are so right about the MJ we knew having died a long time ago.

That is so awesome how into him you were, though! I love that cake and jacket, you were rockin! :)

I loved Michael Jackson and still to this day do not believe the gossip about him and the kids. Just me...sorry. I have very happy memories of going to the Victory Concert with my daughters and Nana. It was a blast. Yea he looks different than that cute boy who did thriller and beat it but hopefully he is the same inside...who knows.
Love you Baby
Mutha

i remember stealing that michael jackson shirt you got at the concert for myself. I LOVED that shirt!!! He really was a HUGE influence in our house.. we were all really into him. Thriller was what started my obsession with dark things like Tim Burton. I loved being scared and watching that video. But i have to agree.. in my head (to lighten the blow, i guess) i pretended that the michael i loved had died and that this weirdo came and replaced him. I will always love 80's and below michael... 90's michael showed too much chest and hugged on mccaulley culkin. I didn't really like "save the world" michael. dancing michael was MUCH better. *sigh*... i wish HE was still around.

I know what you mean. It's really sad and all, but the old Michael was already gone. It's funny that you George girls were so obsessed! I remember seeing home videos of Lindsay watching her idol on TV. SO FUNNY!

I would have never thought that you would have had a party theme of Michael Jackson. Love the jacket and the cake ROCKED!

I knew that we were soul sisters. I too was in love with MJ. In fact I got his poster here in this house that we are currently in. I had a sparkly glove and wore loafers to do the moonwalk. One of my biggest regrets is that I never saw him in person. I would have loved to see the performer that MJ was! The only thing that I have to say is that he was at my house on your birthday....jk. I am kind of confused at his death. Aren't we all? He ended up being a wacky character! I am glad to know that in the after life he is the old MJ, black, a dancer, a singer and person with a regular looking nose!

I loved me some Billy Jean. And OH MY GOSH--who made that cake?

You couldn' have said it better my friend!!

That cake is off the door hinges...love it!!

And a little Michael will always live in all of us...80's Michael of course!!

Do you still have the jacket??..

Hey! I never thanked you for your fabulous Lowe Family Junk!!! We are still recovering from our 3 week vacation...please forgive me :) You're the best and the gift rocks! Thanks, thanks, thanks!

And your cake was totally awesome, dude!

I really like this post honoring MJ. I totally agree with you about the "mourning for a long time". I was too shy to even express my fan-ship about MJ when I was young. I quietly was in awe of his brilliance and talent. I LOVE to watch his videos on youtube.

i had the EXACT same poster. and his magazine (back from the time of the hair on fire) and the errrrrrrthing.

i loved him. love him. and cherish the fact that his music provided the soundtrack to my young life.

p.s. contrary to popular belief, billie jean was NOT my lover.