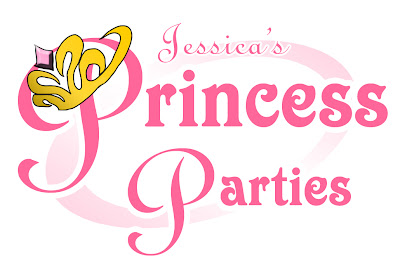 It was started by a simple girl named Jessica who had just had a baby girl and who's husband was starting law school. She wanted something fun to do to make a little extra cash so she borrowed $1000.00 from her parents to buy a couple costumes and throw some games together.
Before she knew it, she had her first party and fell in LOVE with her new dream job.
What started as just a small idea, turned into a HUGE venture.
Jessica started to realize the need for fun children's entertainment in the DFW area and she maximized her business to fit the needs of her big city.
Slowly but surely the word about Jessica's Princess Parties spread and before she knew it she was the top children's princess entertainer in the entire metroplex.
She worked her butt off to make a flawless name and reputation for herself.
Weekend after weekend she would put on her different identities and be off to make many dreams come true. All while her law school husband stayed at home to watch the kids. 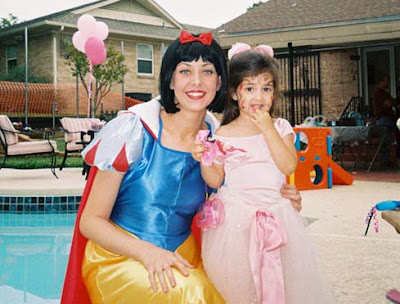 In the beginning she started out cheap and easy but once her business proved it's greatness, she was able to trade in most of her old dresses (most of which are seen here) for BiG BeaUtifuL NeW dresses made by a fabulous seamstress named Valinda. Valinda's dresses captivated all of Jessica's clients. She was known for looking identical to the character she was portraying in EVERY way. 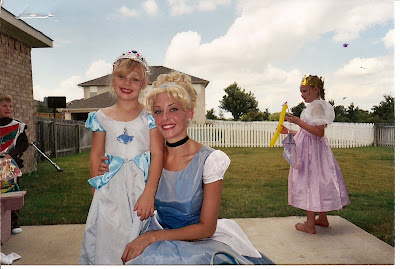 Jessica loved her job but she knew it would not last forever because all good things come to an end. Because of this, she made sure to enjoy every single moment of every party. There was nothing that could compare to the love she received from all her princesses. 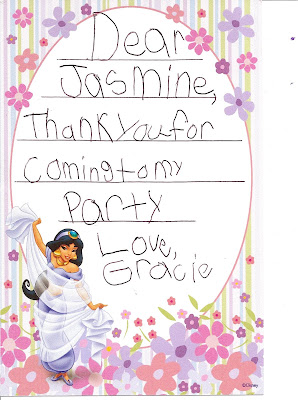 She made dreams come true week after week. Dreams that will never be forgotten or erased. 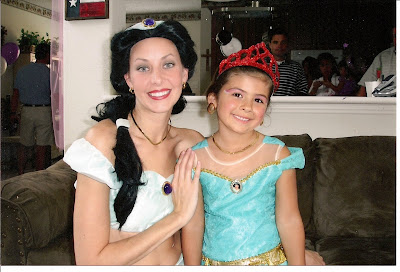 She had a way with entertaining an entire room filled with children.
No matter the age.
No matter if there were boys.
The kids would hang on Jessica's every word and follow her lead as they pranced around the room dancing, going on treasure hunts, playing games, face painting and making balloon animals. 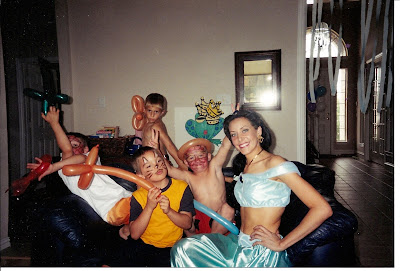 It never failed that every single week Jessica would receive fan mail from her Princesses. It was like being a real live celebrity for kids. It was awesome. She loved every single bit of it. 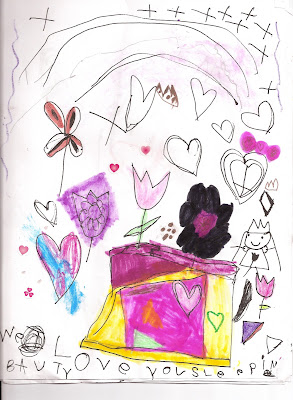 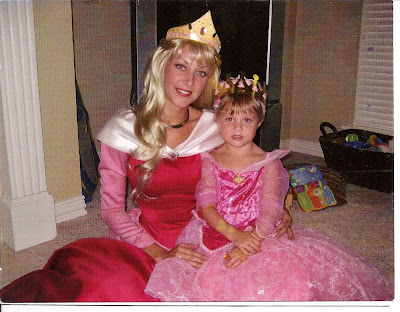 As big as some of her clients were, no princess was more or less important. She loved them all and they held a special place in her heart. 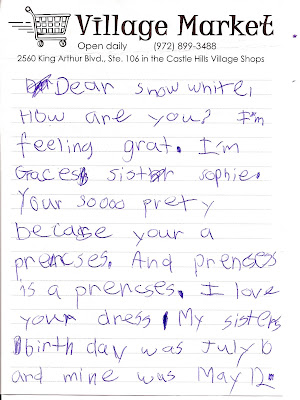 Jessica started to become SO busy with requests, she had to hire additional princesses to help her!
She then knew that her talents could be put to even better use. 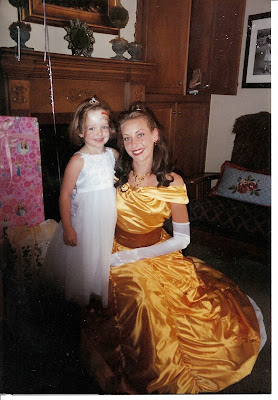 So she contacted the local children's hospital and offered her voluntary services there to visit sick children each month in addition to her weekend parties. It was perfect. Every month she would look forward to making sad children happy again. 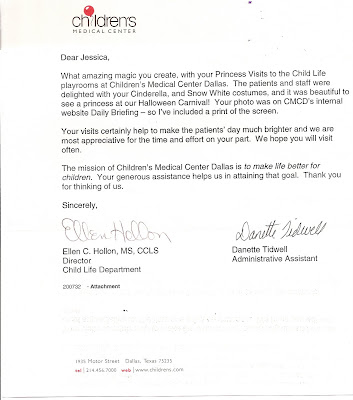 4 years and well over 1,000 parties later, Jessica's husband finally finished law school.
The Marines were calling and it was time to let go of the dream she had built all on her own.
Jessica sold her business to one of her princess helpers who has taken over the business but kept the "Jessica" name which means more to Jessica than anything.
Nothing will ever replace...
Those hugs.
Those tears of joy.
Those letters.
Those smiles.
Those happy mothers. 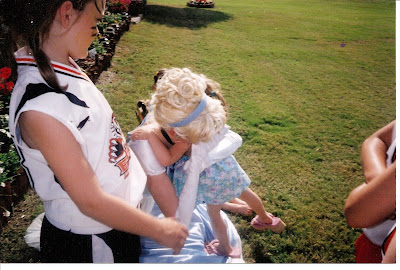 Even though most of the physical evidence is gone except for the original Cinderella dress that still hangs in Jessica's closet, some pictures and a few letters, the memories will remain for eternity.

when no one is looking

and Jessica needs a pick me up for whatever reason

she sneaks away to her closet

and opens up her special box of Princess stuff

just to make her smile

and it never fails

it always brings a tear to her eye :)

Posted by Jessica the Jacked LDS at 4:26 PM

Awwwww- it was a really cool business!!

Okay, so I was actually in tears when I was reading this....I guess its my pregnancy hormones...or the fact that I think that your so incredibly talented and special (probably more "special" since you think that eggs come from milk)! You truely are such a remarkable person! Not to mention COMPLETLY BEAUTIFUL!!!! And dang girl....look at those abs as Princess Jasmine! OoooWwwwww!!!!

You forgot to add that you also donated a freaking butt load of toys to the Childrens Hospital for Christmas and handed them out one year!!!!

Awww. I was in tears by the end of reading this. What a great business!!

That's my little business girl who did this. She is so smart even if she didn't go to college. I am still proud of you. Love Dad

You're amazing. I'm so proud that you're my friend. I can't imagine how heartwrenching it must have been to have had to sell something you worked so hard to grow and make into such a great success.

Love you as all princesses. Especially Jasmine. You look HOTTTTTT!!! :)

You are still my favorite Princess and once you finally quit reproducing like a bunny we are going to create THE most FABULOUS Snow White ever, it will make the dress I made for me look sad. Thanks for letting me be part of the magic.

What a super cool job! And how awesome that you built it up from the ground up to make it into something so incredible. Loved this post. Great flashback. :)

This is the sweetest story ever. You amaze me... I never knew you did this. You are AMazing!! And not to mention F-ING HOT!

p.s. You look like me as Snow White (the hair, red lips...ummm thats about it, eveyrthing else is prettier on you :) .....Oh, and Jasmine,I think I look just like Jasmine! (speaking of...your body is F-ING HOT)!!

p.s.s I love your eyebrows!!

No wonder the boys were following you around! You look freakin' hot! I know exactly why you put these pictures up.... you just wanted to remind us all that you are gorgeous and skinny. Don't worry, once you have those babies... you'll be skinny again :-)

U R: Amazing, talented, brave, kind, generous, fun, darling, creative, humble, supportive, genuine, giving, fit and fabulous. I am so lucky to be your 4th best friend. I hope some of you rubs off on me some day. YTB xoxo

I think from the sounds of ***** comment...you'll be getting a baked plate soon:)

oh my goodness..i had no idea you use to do this! that is awesome! You are truly one of kind and know how special you are. I also agree w/ steph you are sooo beautiful and no wonder every lil girl envied you..you look just like every princess! Rockin abs jasmine!

You are amazingly talented. That is awesome that you had a dream and went for it....too many people do not follow their dreams.

Since I have seen you in action.. I can truly say that you are magical... what a gift you have working with children... even though my girl is almost seven.. Ariel was here and she was real....what a blessing..and yep you were hot as jasmine..

That is cool that you did this for people, especially going to the hospital. And if only those little girls and moms knew what you went through to get abs like that.

Jess, you doll! Could you be any sweeter!!??

This was such an amazing (and impressive) thing you did, Jessica! You were a GORGEOUS princess, and I COMPLETELY HATE YOU for having thos abs after TWO KIDS. Ugh.

You are sooo wonderful.
I don't know how any of us can compete with someone as wonderful as you!!
you are funny,beautiful and smart and the rest of us are so jealous of you that is why we don't blog every time we fart crosswise!
Beauty queens!
toot away!