NUMERO UNO
First and foremost I'd like to give a shout out to Izey who chilled in the pool yesterday.
Nude. 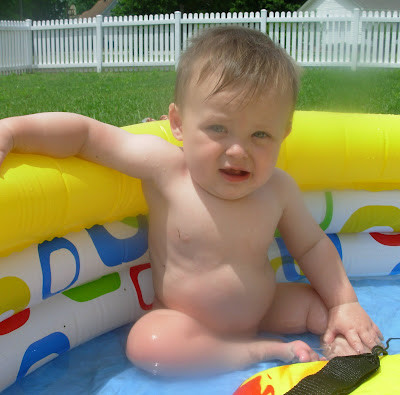 As if that wasn't brave enough... 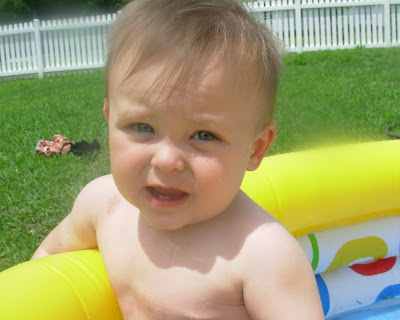 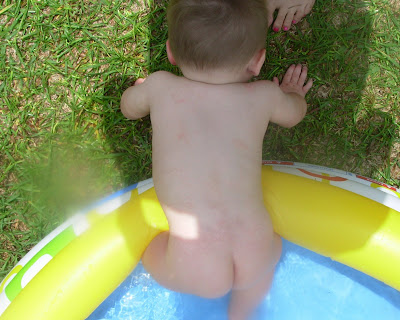 ...he chilled in the grass. Balls and all.
You gotta admit, that takes...
well,
balls. 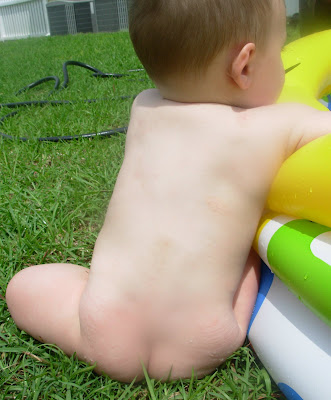 TWO
I'd like to give a shout out to a super LAME blogger Jessica C. Her blogging work sucks big time and she's like watching a train wreck (which I really have seen before and OHHH it's sooo good).
Go on, you know wanna see you rubber neckers. She needs some more stalkers, so hook a sista up would ya? Leave her a comment while ur at it.

THREE
I'd like to give a shout out to an absolutely hilariously PERFECT blog called,
Stuff Mormons Like. It's so right on it's scary. I laughed at every single one, out loud. She needs to add NieNie to the list though.
Ps...do you think I advertise NieNie enough to get her to freakin CHECK ME OUT??!
Come on NIE!!
I know you're there!!
Leave me a dadgum comment for pete's sake!

FOUR
I'd like to give a shout out to MY SELF.
Uh huh, ya that's right.
I worked out today for the first time in...
SIXTEEN WEEKS.
Holy crap.
Those buns were screamin for some cardio love.
15 minutes uphill
15 minutes jog
15 minutes stairmaster
and some buff arm exercises.

I'm gonna be so hot tomorrow.
I mean sore.


Ps...Reminder to self:
Don't leave town for 5 days and then try to leave your baby in a daycare that he hasn't seen in 16 weeks and expect him to be fine. Bad idea.

FIVE
I'd like to give a shout out to JAKE the rad because he found a friend in the neighborhood who is actually NICE to him. Best part about him is that he's dorky, I love it. He's awesome. Jake's happy.

SIX
I'd like to give a shout out to my new swimmer that just came in the mail.
The one that inspired me to get BACK in the gym.
Holy mother of cellulite.

SEVEN
I'd like to give a shout out to the couple that was scheduled to give talks this Sunday but instead they cancelled leaving the bishopric to call ANOTHER couple last minute giving the NEW couple only 4 days to prepare.
That new couple being me and Austin.
That's awesome. I love talks. I love feeling like I'm gonna poop my pants I'm so freakin scared outta my mind. I love when my face turns bright red and my neck gets all blotchy from anxiety. I love feelings inadequate and uneducated. It's hot. I can't wait.

EIGHT
I'd like to give a shout out to my discipline board for making my life more peaceful.
So far only two complete strike outs. Guess who got them? I'll give you a hint. One rhymes with Mora, and the other Ly-uh...as in LIAR.
No but for real, he only lied one more time but quickly corrected himself when I told him that I'd have to wash his lies out with soap. (thanks Valinda!)
Ever since then he's been great and so has the diva.

NINE
I'd like to give a shout out to Kathy for finishing school. Because I never could. You're rad.

and TEN
I'd like to give a shout out to
YO MOMMA.
Cuz mutha's rule.
Happy Mutha's Week
and month
and year
and lifetime.

Posted by Jessica the Jacked LDS at 3:06 PM

Despite the fact that I hate odd numbers it is okay that I am number nine because I love numbers that are divisible by three. I know I am OCD but you love me!
Thanks for the shout out-I truly feel cool now. I love that Izey sits in the grass naked. Ouch!
I also started working out for the first time in four months-right on!
By the way, your blog does not sound uneducated so I have a hard time believing you sound uneducated in real life. You will be great! Just don't make a lame joke about how you tried to get out of the talk. If you are going to start with a joke-pick a funny one!

yes. i love the pics of izey row... he's quite the studly little butt.

ahhh naked baby! I'm thinking of getting smiles a cute pool like that. I'm a lil more retarded though when it comes to sunburn so no naked smiles out in the sun :(. Also I'm so jealous my cousin jessica got a shout out...i don't blame you b/c her blog is pretty lame(aka awesome!) ;)

are you preggered again? reader shows me a post that leads to me think so but when i come to your blog it doesn't show, what the? the suspense is killing me!

Um, I checked out that stuff Mormons like and I guess I'm Mormon cause I like those things too!

Love the pics of Izey, he's so brave!

okay that Mormon blog is hilarious!!!! And Izey naked is so cute:)

I just went to the mormon blog link...uh yeah I think I threw up in my mouth. Gosh how do I live here in utah and how am I a mormon!

Did you post something else on here and then delete it...because I read something interesting in my Google Reader that isn't showing up on your blog...

are you messing with us? did you postpone or delete a post? why are you stating the preggers business like we all know? and why don't we all know yet? lucy, you have some splaining to do...
and get that boy a speedo or something so his business doesn't have to rest in the grass, please.

all of you need to lay off ur crack habit. i don't know what ur talkin about.

hA! okay FINALLY they all saw the post too! YEAH! You better tell us! or we might un-follow you! I just said *might*........SPILL THE BEANS GIRL! Blogger does not lie:)

So why are you freaking out about your talk? I still remember the last one you gave in Rockwall. It was awesome. So stop your worrying because it'll be good!

I can't even focus on this post until I know. TELL ME!!!!

ANYWAYS...Love the shout outs. Aren't the comments just supposed to be about this post? .
1. Nice buns
2. Crapo Rules! She's mine!
3. If Nie starts being your best friend will you still be my friend?
4. I'll be over with a hot pad and Motrin around 7am. Your gonna need it, jiggley thigh.
5. Just in time for some serious exploring this summer with those two. Yeay Jake!
6. Can't wait for the Fashion show...you go first.
7. Every fiber of your being is gonna rock the house
8. Genius
9.The uneducated one is having feelings of Jealousy
10. You're mom goes to college. -Kip
SS

r u just trying to get more followers:) YOur already up to 59!