Ugh.
I have officially decided to declare myself 100% mentally CrAzY.
Isaak went to the allergist today to find out what foods he's allergic to.
Given the last 5 months of vomiting and diarrhea, I ASSUMED he has major food issues.
Wouldn't you?
So he gets poked 22 times.
20 in the back and 2 in the arm.
See... 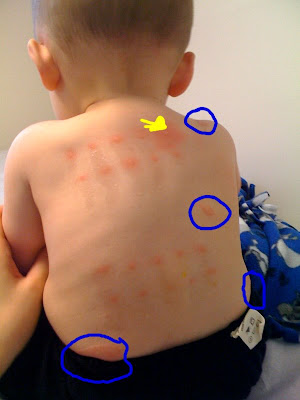 Ouch right? He didn't even cry the whole time. He was sooo perfect. Everyone there loved him. My doctor said that half the women who come into his office don't deserve to have children because they know NOTHING about their child. He said to me, it's so refreshing to see a mother who really earnestly CARES. I thought that was nice...given the fact that I have FOUR* children and sometimes I doubt my own capabilities.
The blue circles are his skin allergies, not a part of the test but definitely a topic of the visit. The yellow arrow is pointing to the controlled poke. This poke lets us know what the other pokes will look like if he's allergic to any of them.
You see that? Look again.
He's allergic to...
NOTHING.
Whiskey, Tango, Foxtrot????
I'm sooo confused. Did I imagine all of that?
The doctor DID say that the ONLY poke that could have inaccurate results is the milk poke. He said that obviously the poke shows he is not allergic, BUT given his history having milk products he obviously IS. Well, at least I'm not TOTALLY nuts.
Here's the diagnosis:
Start to introduce soy BACK into his diet but only with ONE ounce a day, the rest Nutramigen.
Start him on rice cereal and keep him on it for a full week before introducing another food. He hates rice cereal, who doesn't?
Basically we're doing a "food challenge" to see what he takes.
Doing blood, urine and stool tests to check for other problems.
Back to the allergist in 4 weeks to re-asses.
Going to a dermatologist for his skin issues which he thinks are a form of psoriasis instead of eczema. Going to do biopsies on those. He thinks they are unrelated to the allergies but I disagree. They OBVIOUSLY got worse when he was on milk based products.
I don't know that I'm 100% happy with this doctor but I'm not sure how tricare works when you want a second opinion. It's not that I disagree with the allergy test results, I know those aren't going to change, I just feel like the next steps he wants me to take are ridiculous. When Isaak was on soy he was horribly uncomfortable, constipated, whiny, had poor sleep habits...etc. Why go back when he's doing so good on this nutramigen? The only reason he wants me to do soy is because Isaak's stools are still VERY mushy and diarrhea-y.
I think I'm going to protest adding the soy or maybe only add an ounce a day and NEVER up it.
What do you think?
SO frustrating to be the mom and KNOW that you didn't just imagine all of these issues that he's having and STILL having.
Or did I?
Posted by Jessica the Jacked LDS at 3:32 PM

No, of course you didn't imagine it. That looks so painful what he had to have done! I can't believe he didn't cry at all. That's pretty impressive. I would've been balling my eyes out.

I agree, though, if he was that miserable on soy, I can't see the logic in putting him back on it.

You didn't just inagine anything girl. You are fine and an excellent mother that paid enough attention to realize that "this" might be an allergy issue. That looked painful, but he is a little champ!

If he was miserable on soy, I wouldn't even TRY giving him any. Mother's know best. Sometimes doctors really PISS me off!

Milk definitely makes skin issues worse. Kafra always had super bad eczema that would bleed and she had to be on Elidel (which I have heard has been pulled off the shelves because it has cancer-causing agents. Yay!) Anyway, when I took her off milk products, her skin cleared up beautifully.
BTW do what you thing is best. Nobody told me that milk causes mucus that could aggravate her asthma and nobody suggested I take her off it. I did my own research, and the results were fabulous. Do what you think is best!

awe poor baby..I don't like those pokes. You're an amazing mother, what a lucky lil man to have someone care for him so much.

Well, I'll tell you what my allergist told me. When I had the allergy test done nothing showed up at the doctor's office. Then the next day, I had whelps all over my back. I went back and the doctor said that sometimes the reaction takes a little time but if there is any reaction at all, then you have allergy. This was with seasonal allergies, so I don't know if it is the same. But, watch him. He may just have a delayed reaction.

I just can't imagine what your going through with all of this:( I would go with your Mommy instincts here...

I so say go with Mommy instincts. It's your life the food allergies are running and it's your money to spend on the golden formula. Go with what works for you and talk the Dr. recommendations as you see fit.

Doctors are such a pain. I have been through that testing and it is uncomfortable.. Isaak is a troop for sure... there is no way i would go back on the soy if it was hard on him.. you know best.. go with your gut.. and if you didn't like what you heard today i would find another doc...i feel so bad for you and him.. no fun

Poor Isaak! I say go with what makes you feel comfortable. You are his mutha and know what is right! Keep us updated!

Oh, eew, I remember your soy stories. I don't think I'd be keen on adding that back in, either! So what happens if you don't do what he said and go back in 4 weeks? (And do little babies REALLY have psoriasis?) Wow.

"do what the doctor says..they know best"...remember telling me this when i was in the hospital with lucas??? yeah. THIS is what i was talking about....your motherly instincts tell you something else right?

Go with your gut and do what you think is best for Izey. Doctors only get a snapshot of your life and make their best guess based on that.

Jerad will tell you... Doctors don't know as much as they seem like they know.

Welcome to the world of allergy testing!! Same thing with me, alergic to nothing...umm...but when I take my allergy medicine daily I feel tons better...quincidence? I THINK NOT!!!! My opinion...drs are just as clueless as you...but have an expensive degree for their cluelessness!! :)

Trust your mommy gut...I've only heard it's always right!

I'm back! What happened to the pics of Izey's teeth for John? You never sent them.

Your blog always makes me smile. Like that pic of you with your smudgy mascara. Horrible.

And your post that says nothing but is a hilarious list of randomness nonetheless. No wonder your FIL calls you all the time.

The best was the quote from Brigham Young. Now I have justification for trying to wear sexy clothes to church. Yea right. I'm still nervous.

THANKS! TALK TO YOU LATER. THANKS AGAIN!