So there's this dude. More like a man, if there's a difference. His name is Keith and he's my FIL (father-in-law). You may know him as Pops. Remember? He's the guy with the wedgie from this picture... 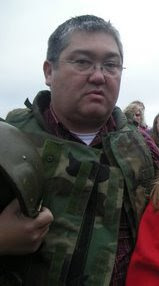 He emails me the other day asking me if I would RE-invite him to my privates.
The thing is...I already invited him and he, like that other loser named Lover, IGNORED my invite allowing his invite to expire (or I deleted it, I can't remember). And NOW he wants in? NOW that there's stuff over there and it's exciting and life altering? NOW? Ugh.
It's actually not such a huge issue...I would invite him back in a second, BUT here's my problem. I'm wondering if he has been coerced by my Lover to get in so my LOVER can sneak in through the FIL's account??? Fishy huh? They are quite close to one another and although I love my FIL to pieces (he really is the best, no joke) I don't quite know if I can trust him at this point of the game. The FIL and the Lover HAVE been known to keep secrets...and that's what makes me question his sincerity in wanting to be invited.
SOOOOO, here's the deal. I'm not going to make the decision. YOU are. I've decided that if I allow YOU guys to choose whether he's in or out then I'm at no fault, YOU are. If you say yes, then great, I'll let him in. If by some chance he fails my trust and lets the Lover in, completely RUINING my secret decorating, then I can get mad at none other than YOU, punishing you with sparse posts, lack of drama and YEARLY Wanna-Be's. BUT, if you say NO, don't let him in, then I won't, and at that point, when the FIL starts to call and text and email me with his complaints...I can tell him it's not my fault...it's YOURS.
(was that not the longest sentence with the most comma's you've ever seen?

Sound good? So come one, come all. I know you're out there you stalkers of my blog...I know because I've heard from at least 4 of you within the past week!! I love how you secretly sit behind your screen, reading my drama and LOVING it. I love how you smile when you see I have a new post whether it be boring as heck or one of the great Weekly Wanna-Be's. You know it's true...you know you do this. Don't risk losing my fabulous blog posts. Do ME a favor now and place your vote.

NO...he stays out
(at least until the decorating is revealed)
(PS...is it totally cruel of me that I made cookies last night AFTER the kids went to bed so I don't have to share them with anyone?)
Posted by Jessica the Jacked LDS at 7:27 PM

No.... well, unless you really want to, then yes. But no! Except that you could be abandoning the only father-in-law that you will ever have and his feelings and your future relationship may depend on it...but I say no. I think.

Nevermind, I say yes... he looks pretty mean in that picture and I'm not really sure what he's capable of when he gets angry :-)

Oh, Oh about the cookies... Dave and I used to make cookies all the time when the kids went to bed... so no, you're not cruel... your selfish. Cruel is when you make them when they are awake and don't let them have any. But that's one selfish person's opinion.

NO...he stays out. Perhaps in future the Lover and the FIL will listen up and heed your words in a timely fashion.

I say NO. Looks a little sneaky to me. Sorry Keith!

You know.. part of me wants to say YES, but only because everyone else said no and I feel like the guy needs somebody to cut him a little slack....
However, my true answer is HECK NO.... they are so conspiring against you right now... I don't know them (of course) but I can just feel it... ;)

no! I can't deal with lack of posts and yearly wanna be's! You know they are conspiring!

I don't believe your threats, because you love blogging, so I say YES! Plus I would feel really bad if he read this, so I say DOUBLE YES!

Here's the deal. If they have been known the keep secrets a time or two before than what makes you or us believe that it won't happen again? Besides why does he care about girlie things like your home decor? Because basically that's what it is, and that is why I think that your Lover is playing a role in this. You are a smart thinker. When he gets back in 9 weeks then I say let him in. But until all is revealed to Lover Duck I say NO! But then again maybe it's just me being a bit selfish, how would I get a good nights rest without hearing about your lasted puff mama moments or all this "drama" you have going on in your life? hehe Oh how my world would be shattered. ;)

i say no for now

Umm yeah, I'm sure he's really awesome, and not in on anything but I'm gonna go with no. That is seriously suspicious. Good plan on the cookies. I do that with brownies :)

i say NO... he stays out... because out of selfishness i can't risk boring posts from you... then we'd BOTH be boring on our blogs... i can't have that!!! what would i refresh in my browser every 5 minutes???!!

Ok, I am a stalker (but I am forced to by my wife). She loves your blog and all of your posts. She cracks up and can't wait to share them with me. Ok, my wife is Brandi and she considers you "one" of her friends...whether you knew it or not. So, since I was on here "stalking" your fam I thought I'd add my 2cents (I'd offer more but the economy has really affected my opinion's value).

Here's my reasoning. Sons love their fathers. Sure your Lover loves you too. In fact, I'm sure he loves you so much he'll try to be sneaky and use all of his resources to get all the info he can on you (or your most recent decorating scheme), including going thru his dad. That's my thought on that.

But if you change your mind...ummm...I'll go along with what you vote. :D

P.S.
Don't forget the *FREE* Grand Slam meal at Denny's tomorrow, February 2nd from 6am-2pm. Take your kids out for breakfast!!! If you don't believe me, check out their web site at www.dennys.com or google it. Even if you had to wait for like an hour for a seat, the free meal would be worth it!!!

I like to read this post and think that you are considering inviting your father-in-law to your who-hahs. It's so dirty, especially when I just stare at this picture.

Will you have a vote on whether or not I can get an invitation to your who-hahs?

I'd say no and trust your feelings! It's strange how they both want access in such a short time of each other after both hadn't acted on the invite previously! Makes you wonder ;) Plus, I do like your blog and your weekly wanna-be's.

no way.. that boat sailed.

No. If Keith wants to see it, he can ask your m-in-law.

YOU SNOOZE YOU LOSE. Plus, i think Austin's using him in a covert op to get into the privates. Look at me sounding all military and crap. I made a whole batch of poo cookies yesterday and ate most of them before I offered any to the playing kids upstairs, so don't feel bad.

btw, could you have picked a more unflattering pic of Keith to use with this post. He looks like an angry, angry man...which is probably how he'll look when you kick him in the privates...oops. I mean, keep him out of the privates.

You are all terrible. The only thing my dad is guilty of is loving me, raising me, and teaching me how to be man. You all have let Jess tarnish my dad's good name and reputation as an honest and trustworthy man. Thank you Amber for seeing through Jessica's evil intentions to turn everyone on my dad. Shameful! Honestly, I've never talked to my dad about visiting Jessica's secret blog. That's not what men talk about.

Klyde,
Let him in.
MA

Since MA and I are one, I will agree with him. Let the good man who raised your perfect-for-you husband see your freakin' privates. He just wants to support his family. And maybe he could give you a few tippers on your paint color choices. sk

you know, Brandi had a good point. What does he have an interest in decorating anyway. I was thinking how mean of you to be that way to "my boss at church" BUT then again he and my precious son in law are close and could conspire. I cannot tell you yes or no. I partly think he should come in because well he is Pops and well he is a grandfather to your kids but I just know that the two of them have to be conspiring against you. I cannot vote because I am an indecisive person. I cannot make decisions. It is amazing that I raised 3 girls with my lack of decision making skills. Love you any way, Mutha
PS. Why would you WANT to eat that many cookies by yourself anyway. You could get to see the sweet look on the face of your babies and the enjoyment that they were experiencing had you shared with them. oh. well I am a mawmaw I would have had them help me make them AND helped me eat them.

I have never known POPS to be as mean as that picture makes him look. He is my "boss at church" and is always nice to me except for the time he told Mike Allan that I just didn't show up to teach my classand didn't call or get a substitute or anything. Mike Allan yelled at me...hheheheheheh....Not really...He is a good boss so he is a good father in law and a good pops...um...maybe let him in and make him swear not to give Austin the code. I don't know...sorry. Mutha :)

Hey why can Jannae not come in? She seems like any alright person to me.
Mutha

You sure are getting stingy with alot of things...the blog...the cookies...I see a pattern here.