Let me start out by telling all of you that most Mormons don't watch rated R movies (if you didn't already know). One of our prophets, President Ezra Taft Benson, gave us excellent counsel when he said:
“We counsel you … not to pollute your minds with such degrading matter, for the mind through which this filth passes is never the same afterwards. Don’t see R-rated movies or vulgar videos or participate in any entertainment that is immoral, suggestive, or pornographic. … Watch those shows and entertainment that lift the spirit and promote clean thoughts and actions. Read books and magazines that do the same” (“To the Youth of the Noble Birthright,” Ensign, May 1986, p. 45).
I, being the rebellious type, continued to watch rated R movies even after this counsel was given up until about 2 years ago when I finally felt the promptings to stop. I don't know what it was, but something one day just clicked and I KNEW that I shouldn't watch them anymore. It was hard for me because my violent loving husband still watched them, because my favorite movie of all time is rated R (true romance), AND because I was knee deep in a TV series that although isn't "rated" anything, would definitely be R if it were. Still, I didn't give in, but I did justify R movies that I'd already seen as "ok" because they've already tainted my mind, what more could they do?! Wrong. Eventually I stopped even watching repeats and everything R all together.
Now Austin was a different story up until just a couple weeks ago when I received a very surprising phone call from him. Here's how it went....
A: Hey babe, whatcha doin?
Me: Nuthin, why?
A: Well, I have a declaration.
Me: Ooohh, that sounds big. Is it good or bad? Please don't tell me to stop spending your bonus money on decorating the house.
A: No, that's not it.
Me: Well what is it?
A: I don't know if I wanna say or not because of what you'll say.
Me: WHAT?! Ughh...I'm not gonna say anything
A: Ok. I've decided to stop watching rated R movies.
Me: (jumping up and down and doing a winners dance but keeping my voice normal and calm) Oh...ok.
Now, let it be known that I never pushed him to do this. I'm not that kind of wife. I'm more of the..."I'll be a good example until you get sick of watching me be Molly Mormon and having to bend to meet MY standards and then YOU'LL wanna change too just because it's more convenient" type of wife. No but really...
So then he tells me that he wants me to get ALLLLLLL our rated R movies together and SELL them on Lejeune Yard Sales. WHAT THE CRAP?!?!?! That's even bigger than I'd go but OK! I'm proud...really proud of him because most of the movies shown below are his super most favorite movies ever. BUT, my reasoning is...what harm is it REALLY gonna do if you never see any of these movies again, right? None. SO why keep em?!
I'm listing them tomorrow. $8-$10 a movie unless you buy more than one and then I'll cut you a Sweeeeet deal. I figure...with 38 movies...at $8 bucks each...
That's over $300 people!!!!!!!
Heavenly Father sure blesses us when we do what he wants, huh? *wink* 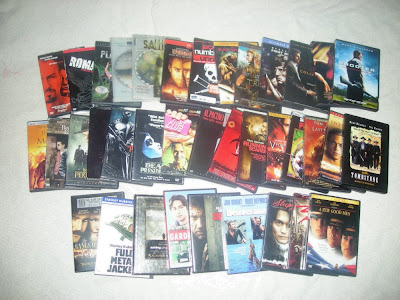 Now, that being said. Here's a sweet thing that is only rated R for "ROUNDY" 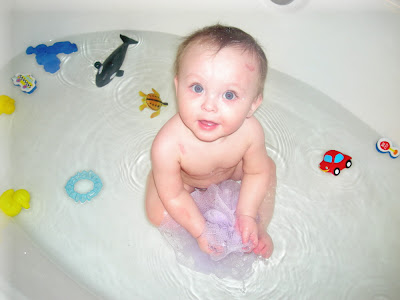 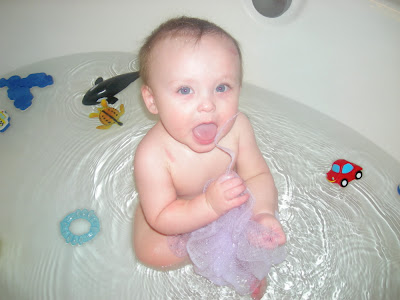 Posted by Jessica the Jacked LDS at 7:06 PM

I love this Lowe family. Glad to be a part of it. That baby Izey is so sweet and even "sexy" in the loofah picture. Uh...that's all...gotta go...Mawmaw

Yay for money and yay for the good example for your kids! I LOVE your little roundy, with the strategically placed loofah, way to keep it family friendly!

I don't know how they would come out--but we have the clear play DVD for P to watch his Spiderman and Iron Man movies in. I have never watched an R rated movie in it though (Only Pg-13--but I am sure it would cut out all the r-rated stuff.)

Congratulations on your triumph!!!

Izey is too cute with his loofah licking.

Ok, so not to burst your bubble... but isn't that kinda like going to the grocery store on Sunday's. So you yourself are not working, but it's ok for the check out clerk to work for you. Same with the movies, by selling them you are expecting others to watch R rated movies.... and making a profit off it! You're like the drug pusher that doesn't believe in doing drugs. Hmmm, I think you should just chunk 'em. But that's just me and you know I'm all Molly Mormon and stuff :-) hahaha! In all honesty, I am very proud of A! You guys are definitely doing the right thing, you are such a good example! Keep on Keeping on!


Oh, and Izey is always adorable... what's new about that?

Good job. I'll take all of them. hehe. Just kidding. I finally had to give up watching one of my show's cuz j gave me so much junk about it. Let's just say he wanted to rent Shaggy Dog last night.

Go you, Molly, and your Peter Priesthood husband! HA! Very admirable! And how endearing and attractive is it when your man makes good choices!?

i like r ratings... when they stand for roundy. SO handsome :) As for giving up R rated movies? i'm still working on that... but i have to say... i don't like the idea of having to tell the kids to, "get out of here fast!" because of something i'm watching... it makes my heart hurt. I'm sure i'll come around one of these days. Enos and i are really trying to be good.

Sometimes I can't even believe the MOLLY you have blossomed into!!

Because I'm your friend...I congratulate the pair of you on the complete success of the riddance of R-ratings!

With all that being said...I will take Fight Club, the Saw movies, annndd...DEAD PREZIDENTS!!! LOLOLOLOL...no not really!!