This is the first school we've ever gone to that has allowed the kids to come to school dressed on Halloween. At least that's ONE good thing about the Fburg schools, right?
As soon as Kora woke up she was in a good mood (which is a rare thing) cuz she knew she was gonna be able to wear her Princess Kora dress. She said her usual "odd Kora comment of the morning" (she always says something crazy as SOON as she wakes up from her dreams) and today it was, "I didn't get to finish my banana!" Then she jumped in the shower and then into her dress. She wore makeup and all!!
Miah slept next to his Venom costume and if you tell him he's Spiderman he gets all mad and says, "NOOoooOO I'm VENOM!" He was shy when he came down to eat fruit loops with his costume on. He kept giggling to himself.
Jake pieced together a few items in our dress up bucket to create the Emperor costume from Star Wars. He's going to wear his Boba Fett costume tonight but he couldn't wear that to school cuz it had a mask. He even made lightning for his fingertips with pipe cleaners. Nerd.
Me, Izey and Miah are gonna trek on over to Kora's school a little later for a parade they are going to put on around the school where they all march in their costumes for everyone to see (wow that was a long sentence). I'll have more pics from the trick or treating festivities tonight!! Who knows, you may see three different costumes later on...(or maybe not). 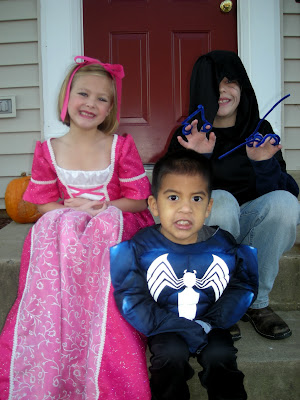 Posted by Jessica the Jacked LDS at 11:05 AM

Man, Jake is so smart! I love that he used pipe cleaners for lightening. He's awesome!
I love Kora's make-up. Ashlyn is gonna be super jealous when she hears about that!
And, well, Miah is just a freakin' doll... viper costume or not! I love that Dr. Pepper boy and I'm prolly gonna steal him. I can always use a little more Pepper in my life!
I love your babies... wait, where is my Izey!

Awww they look so cute! I hope Paul falls head over heels for Princess Kora! I love Jake's lightning (he totally reminds me of Fred) but how is he going to write with lightning on his fingers?? Venom is just too cute! I'm with Bonnie, where's my Izey?

I love their costumes!!! And look at all of their HUGE smiles!!!! You can tell that they all love Halloween! Can't wait to get a picture of all the gang tonight!!!

You have the most adorable kiddos! Kora's makeup and dress are so her! Miah is so cute...I just wanna eat him up! And Jake...where does he get this creative gene from?!? What a smart little guy!

P.S. Where's your costume?!? hehe! You KNOW you want a reason to make another post today! :)

i love my nerdy Jake. :) and i love miah's fake muscles.

i love halloween outfits and how proud kids are when they come to the door trick or treating to show them off!