Today we had a grand ole time traveling to meet our new friends at their home. Aymee and Adalei invited us over for a delectable lunch of homemade tomato soup (yum..I need this recipe) and some fancy grilled cheese sandwiches. It was divine!! She is so cute, both mom and babe, and they have such a precious little abode.
After lunch we packed up 10 coats and headed over to Cox Farms for some super duper fun!
The kids got to see all sorts of animals. Here is Miah lickin the snot of his top lip. 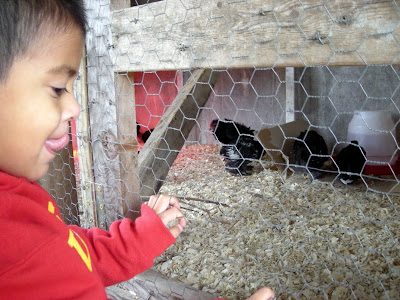 We went down about 529 slides...well Aymee, Miah and Adalei did. I took pics and pushed Izey in the stroller. These were some big honkin slides! 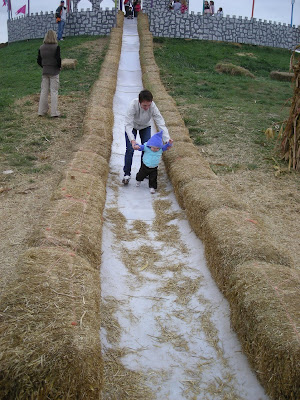 Miah drove Addy around in the tractor, she was ecstatic as you can see. 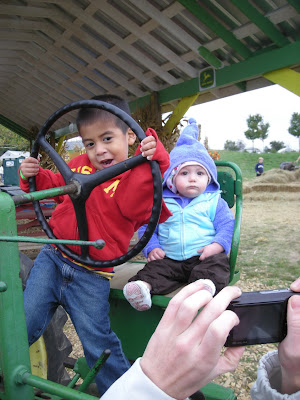 Miah had some alone time with the horse. He liked the spooked horses (mules actually) but he wouldn't milk the cow. He was scared of the teet. I wanted to smash it but I was afraid Aymee would think differently of me. 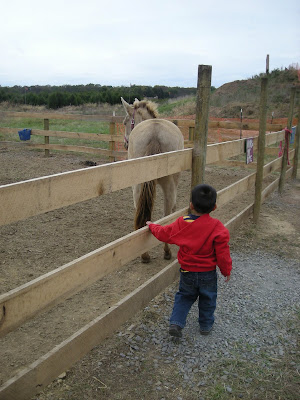 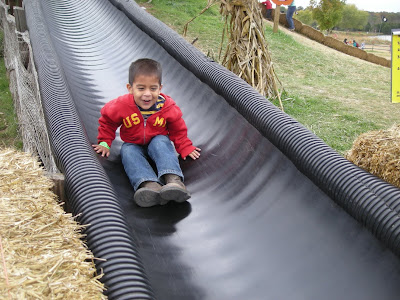 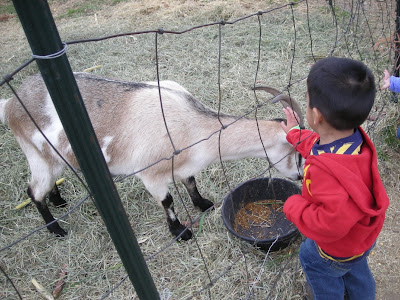 Izey stayed bundled with Shane. He kept his hands nice and slobbery to make sure there were constant icicles on them. 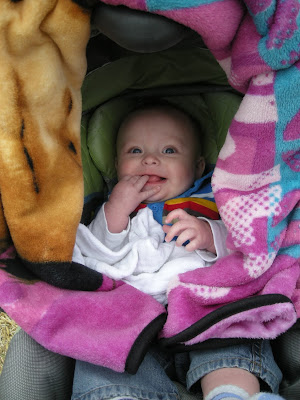 Aymee tried to push Addy into the baby calf pen. She's a mean mom I found out. 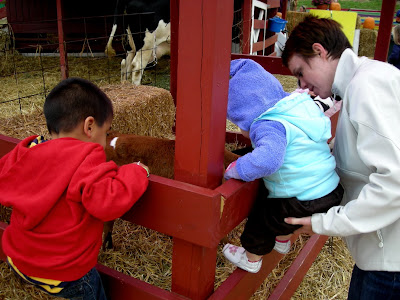 Miah turned into a naked strawberry man? Is that what that is? Whatever it is it makes me feel uncomfortable. 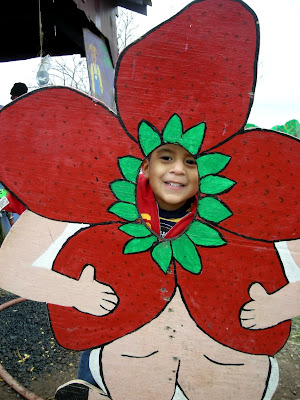 Before we left we took some pics in the punks. Addy was chillin like a villain. She acted like she was RAISED in a freakin patch. 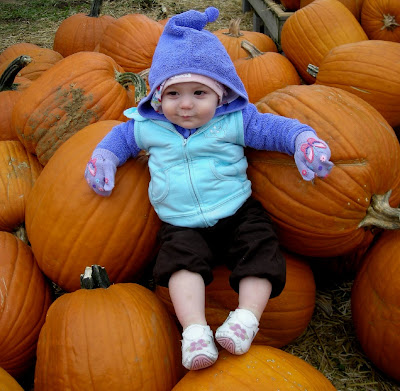 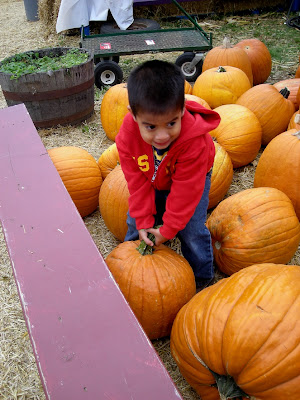 Then...Miah and Addy had a moment. 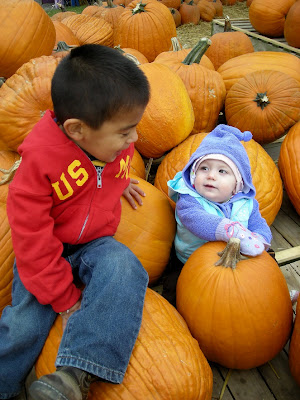 Isaak was more into the hot chick behind him than smilin for a picture. 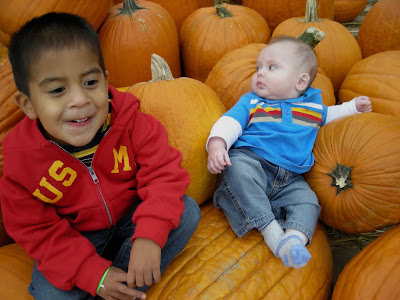 This is my FAVORITE picture :)
My photographer sister would be proud of this one! 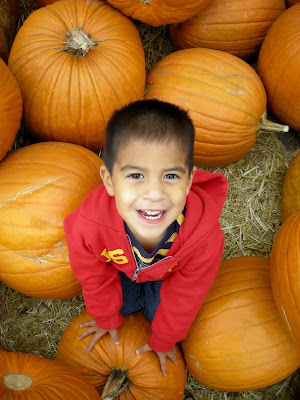 It was a wonderful day! We had a ball and we made new friends to keep! 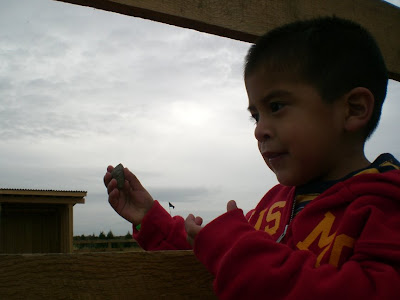 Thank you friends for lunch, the farm and for everything else!
Posted by Jessica the Jacked LDS at 7:38 PM

So how'd the interview go?
Anyway, I love the pics! It looks like a lot of fun out there! You had your hands full with all those Pumpkin Patch Kids! Very cute!

I like Miah's jacket....brings back memories, like the time that we went to the PX and our kids were running around the store hiding from us, but YOU were to interested in finding some diamond studded "MARINE" shirt! I am so glad that I saved you from a fashion diaster, good thing I'm your friend, otherwise you'd end up like the locals down in our new home town!

And I love that Isaak is loving on Shane. He thinks it is way cool! That was nice of you to share Shane with him.

Forget your photographer sister I'm way impressed! That looks like great fun, we don't have fun like that in Vegas. :(

Sounds like a fun, cold day:) Those slides look FUN!

I love the pumpkin patches in the fall! Cute, cute pictures of your boys.

i'm jealous!!! i wanna hang out with Aymee and miss bumbo... that's okay... i hung out with her sisters tonight and we had fun....so HA.

oh... and that naked strawberry man makes me feel dirty.

Hey Jess....so i contacted you through esty..and i dont even know if you got those emails hahah so anyways I have all your onesies done...butttt I was not sure if you stil wanted the ghost one...being that I am a loser and didnt get them done till a week before Halloween. And I am going to send them out ASAP early this week (Priority mail), and if they get to you...they will prob. get to you before fri. or on fri. and if something goes wrong it wont get to you till after Fri.(the stupid mailing system...you never know what could happen). I have had the worst luck with the mail. So do you still want a tie die ghost and I will make it a 12 months or bigger so he could have it for next year?? Or I can just make a diff. one. Or you may be cool like me and dress Halloweeny all year round?? Just email me back and let me know and email me your email address! Thanks again!
Stephanie Toland
Wee Babai

oh, fun fun pic.s I am jealous..I dont ever get to hang out with my cool sis.(that looks like a lil' boy). And I am in love with your babies! Oh, and I need to paint you...(I will email you why I need to paint you later) Peace out home slice!

I have been staring at the strawberry man for an uncomfortably long time trying to figure out what the heck those huge sagging parts? are supposed to be. Very cute pics of all the chillins. I may try to steal that Addy-that pose is hilarious with her little smirk.