Well, he did it! My lover ran the Marine Corps Marathon yesterday in Washington D.C. and it is DONE. I am so proud of him for completing it, he did awesome for absolutely NO training whatsoever (poor guy). He finished at 5 hours 40 minutes. When he was done, he was DONE. Like his legs were DONE running and locked up. He waddled to the car and up the stairs to bed. I drugged him up with some of my left over anti inflammatory from Izey's birth and Bonnie's Percocet so he could get a good nights rest. He was feverish all night and every time I would touch him he was either freezing or covered in sweat. His body was freakin out, it was crazy!!! Today he's much better, just a little tight and his foot is sore. I think he did great, I know I couldn't have done it!
In the pic below is Austin, Romero, Alvis and Kruse. 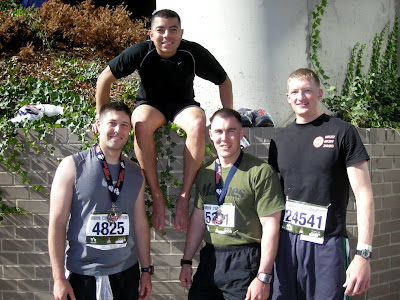 Austin left early that morning to get there so me and the kids left later on that morning and gettin to the marathon was almost JUST as crazy as runnin, holy mother of runners. I guess everyone and their dog decided not to drive and take the metro so it was PACKED like freakin sardines. Imagine me, with my stroller and my 600 kids all over the place. I was goin nuts. I got in a small tiff with the metro man because he was annoyed that I was puttin my kids all through the "strollers only" ticket taker. He said they were old enough to take their own ticket and get in line and MEET me on the other side. Uhmm..are you freakin mad? There were thousands of ppl pushing their way through and you think I'm gonna let go of my kids? You're smokin crack. I told him that all of us were together, we were gonna stay together and thats that. I was with Bonnie's husband Dave and his kids too and Dave got a little pissed off as well, he told that man how it was gonna be.
There was one part of the metro that bottlenecked so bad I started getting claustrophobic and really hot and bothered. My chest was hurting because of the amount of ppl around me pushing and getting in front of me since I had a stroller. I was so angry. My kids were all holding on for dear life, I was so worried that something bad would happen like a bomb and my kids would be trampled to death because I couldn't grab them all. HORRIBLE thoughts were going through my head, it was awful.
This is my view from the middle of the escalator that mind you, was about the size of SIX escalators put together, freakin SCARY. 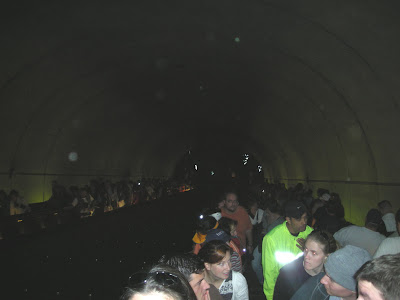 Here's my view lookin UP, it only shows half of the escalator. 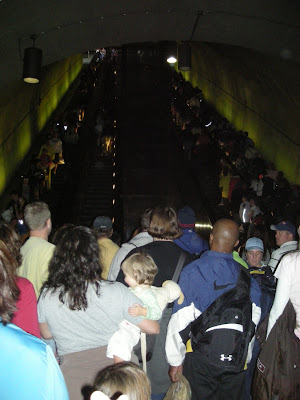 The girls loved riding the metro, they thought it was so cool. 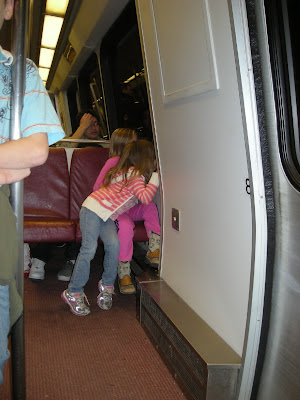 Izey was unsure about everything. He always is. 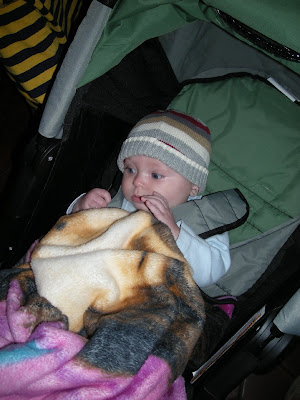 It was hard for them to stay calm with all the excitement. 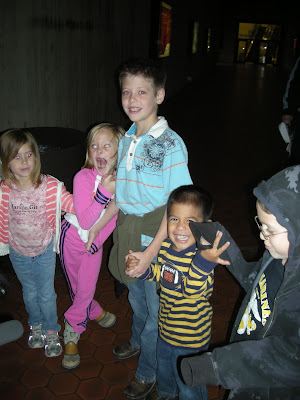 Posted by Jessica the Jacked LDS at 12:56 PM

Way to go Austin. I would never try that. Way to go Jessica. Sounds crazy! Kora looks like she just saw a ghost in that last picture. Love Dad

Man, our kids are so cute! I'm glad that you guys made it safely through all the potential hot spots and were able to watch us run! That dangerous DC, it's such a war zone!
Thanks for going, I know that having your kids there helped Dave with our kids. I think they would have drove him crazy otherwise!
Congrats to Austin!

Way to go Austin! I know it's not an easy race.

If you're ever up for braving the metro again, we should get together and do a museum or something. :)

Yay! For Austin!! That is so amazing, I dread driving 26 miles forget running it. :) Hey! I've been on one of those Metro escalators and yes the thought of the thing breaking or a bomb happening and madness erupting in the big long tunnel occurred to me too and I had no kids with me! I'm glad you all survived with smiles on.

I think I'm still feverish from my marathon six years ago. Is that pathetic or what?

When Andrew and I worked in NYC, our trains would take off in opposite directions every morning. I always thought, "Well, I hope we don't get blown up."

Sounds SCARY...I am a wimp..I'd never go on the metro with my lil' ones! Glad you guys survived! Way to go AUSTIN:)

Marathon schmarathon, I think your metro journey was much more stressful! I get stressed on it durning a normal rush hour, I can't imagine adding a few more kids and a couple hundred more people!

We are in Asheville and they are totally calling for snow flurries tonight. Let the fun begin! LOL

Way-to-Go, Austin!! And congrats to Bonnie as well! Like I said, I am a bit jealous. I really wish I could have been there running that marathon, maybe someday when I'm done popping out babies. Isaak looks so cute (and grown up) in his little hat, what a bug...oh and the Camp Rock blanket. I absolutely love Kora's face in the last one, she does that face often it seems:) I really can't get over how much Jakob looks like Austin, it's scary. I guess we can stop questioning the Milk Man. Tell Miah that Addy misses him and she wants to play again. And and last but definitely not least, Kudos to you mother of 4 (sweet babies), you definitely got the balls baby! There's no way I could have done the metro with kids and not have a panic attack, you're awesome! Sorry for writing a book....

wow austin... WOW. I tried running a measely 3k about 5 years ago and i came home spitting blood and got really sick and feverish. i'm such a wuss. Too many people jessica... toooooo MANY!!! it made me claustrophobic just to READ about the number of people and the shoving and the uncomfortable-ness... ew. i better stop. i'm getting hot.

Tell Austin, My hat to him. It was Aawesome!!! I have always wanted to run a marathon, but had never get to that point. I am so proud of him that he made it. I hope he is recovering from all the running. Tell him we say HI. Also, I am so sorry you have to deal with all those crap! yes, I think that guy is nuts--nutco, to have ask you to let go of your kids by themselves, you may never find them again! some people are just whacko, nutco! You did good Jess!!!
Catch you later.
love ya,
Marie