Some Junk While I'm Sick

1. Austin got home today and I couldn't be happier. He's just in time to take care of my sick butt. He smelled quite nice having not showered an entire week (not to mention brush his teeth because he lost his toothbrush half way through). GAG. Btw, that frog video is from the week before, sorry to throw you all off.

2. Went to the doctor today. I was shivering in the waiting room for 2 HOURS but I've come to realize ppl here think they are doing YOU a favor by...uhmm...doing their jobs? Whatever. I had a temp of 103.2 (my highest yet!) and an upper respiratory infection. I got myself a Z pak so it should blast it outta my system soon. The boys (Izey and Miah) were exceptionally good at the doctor. It's so much easier to take them everywhere. Something crazy happens when you add Kora and Jake to the mix. Weird. I also FINALLY got a referral to a OBGYN so I can get that all taken care of.

3. Last week me, Miah and Isaak went to Target to walk around and grab a few things. We had a snack in the food court while we were there. I found out Miah likes jalapenos on his chicken strips! I also found out that I may have infected myself while I ate there. These are the nachos I ate. The cheese looks worse than it really was but still, something not right about that color of yellow. Food should not be allowed to be this color. 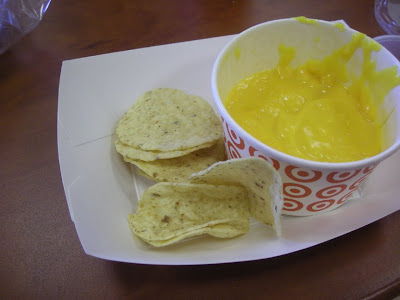 THIS is the clear bag my chips came in. The weird thing was, the bag wasn't sealed shut. It was STAPLED. Yes, that's right, stapled. The even WEIRDER thing? I didn't think twice about eating it until I was almost done and looked at the bag to see the staples protruding out of it. What the crap? Why did I eat that? Why didn't I tell the lady to get me a NEW unopened bag? What's wrong with me. Just goes to show that my brain function is dwindling. I SAW the staples when I got it. I SAW the bag was opened. I'm so dumb. I probably ate some crazy germ or something. Blow this picture up and see the staples in the bag. No wonder I'm sick. 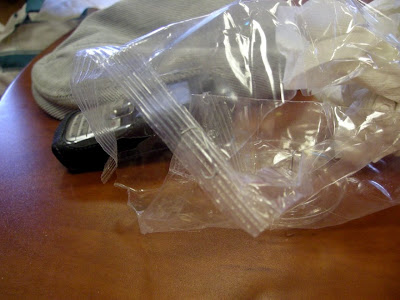 4. While I was at Target I stopped in the baby clothes section to see if they had gotten anything new. NOPE. They haven't and I couldn't find that Yoda tee you were talking about Dena!! Ugh. BUT, I DID find these cute tees. They aren't much, but they were ALL under $3!! Cool huh?! Sorry they are pastels, puppies, tractors and shirts with words on them Lindsay. As fast as my Izey is growing I'm not gonna spend a buttload on his baby clothes for him to wear them like 3 times. 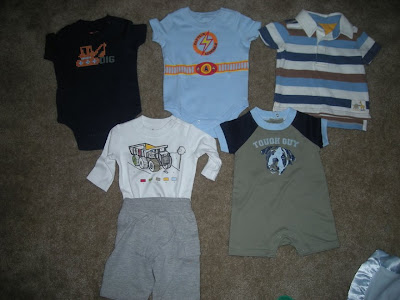 5. Oh and here's the naked man who will soon be clothed by these cute outfits! I LOVE those fat thighs...I just wanna bite 'em! And yes, he is ALWAYS that sweet! No joke. Best baby EVER. 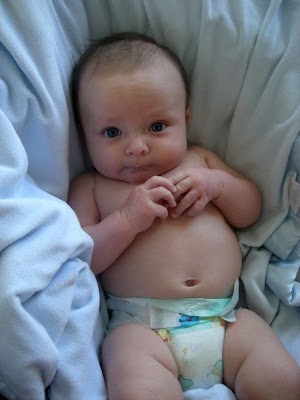 6. Blow this up and read that plate. Elegance in a GMC Envoy? Am I missing something? 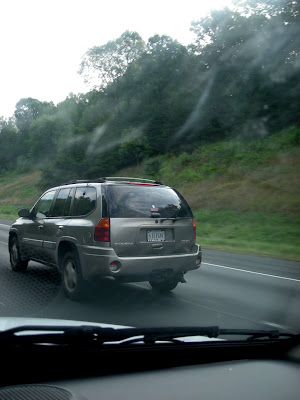 7. I'm taking Isaak to the doctor on Monday because I'm worried about his flat head. You can't tell from the pictures, but the back of his head is super flat (yes Bonnie, I know you've seen flatter) and I'm worried it's only gonna get worse if I don't do something about it. He HATES being on his stomach, even during the day for tummy time...hates it. It's gotten to the point that one side is becoming flatter than the other so it's crooked and misshapen. I think he's got Plagiocephaly and he may have to wear one of those helmets you see babies wearing. I'm okay with that, I just want it to be round again.
8. I've decided to let the kids ride the bus. I know I was totally against it in the beginning because Kora is on her own bus, but I can't take it anymore. The pickup situation is driving me INSANE. The dumb ladies (same ones who work in the office) yell to each other the name of each child who's parent is there. It goes through about 5 different ladies so by the time it gets to the gym where the kids are, the names are all jacked up. One time when I was picking up Jakob they were yelling "JAYLYN LOWE!!" Well, of course Jake isn't gonna answer to that so I had to keep waiting until they decided to ask me his REAL name again. Dumb. I get so freakin HOT and MAD waiting in their pickup lines and then I SWEAR I'm gonna have a wreck in the 5 miles I have to drive between schools rushing to get there in time. It's stupid and I'm not doing it anymore.
9. So, this was the first day the kids rode the bus and of course...there was drama. I'm waiting outside with Miah about 30 feet away from the stop where all the parents are gathered. Kora's bus pulls up, opens the door and out comes kids. They aren't calling out kids names, or asking the parents who belongs to who...kids are just pouring out. I assume that Kora will just pour out too, but she doesn't. The door closes and the bus drives off. What the crap? Where's my Kora? I immediately call the school to ask where Kora is and they call the bus driver. The driver says that she didn't let Kora off because her mom wasn't out there. Uhmm..yes I was. She didn't ask anyone if they were Kora's mom so how would she know? I had no idea I needed to ASK for her. No one else was asking for their kid. The driver said I should have stopped her before she left but kinda hard for me to chase a bus down, ya know? So Austin had to go pick her up at the school. She was fine with everything. She even said that she told the driver I was her mom but they still wouldn't let her off. Virginia is such a dumb state.
10. Yes Laura, I take my videos with my camera. It's SO easy, you can do it. Just plug it up and upload it from blogger. Click that little film strip button and do it. DO IT.
11. I'm tired now. I need to rest.
Posted by Jessica the Jacked LDS at 7:46 PM

I don't think you can move soon enough. Being with your man comes at a very high price!

I'm sorry to hear you are sick, but it's nice that hubby is home for you. :) Oh, and I SO hate you Jess, I mean, come ON! I never win your contests, you complain about your butt when you are GORGEOUS, you like stupid movies, and you are a REPUBLICAN for crying out loud! Honestly, can you expect anything else from me!?! I mean, even though we are exactly the same with how we shop for our kids, and our boys are so cute, it doesn't matter what we put on them, but sheesh, how can we be friends?

YOu poor mama! GET WELL!

Ah, poor Jessica! I really hope that you start feeling better! Anyway, I am so glad that Dave is home too. Man it is hard not seeing them for a whole week! Oh, and I think I lost just a little respect for you when I saw those NASTY NACHOS! Yuck! You have got to be losing your mind! That yellow IS questionable and the staple! What the....
On to my IZEY! So he is so freakin' adorable! I love the hands and the beautiful expression in this pic! HE is truly a great baby... too bad you repay him by letting his diaper get that dang full!! Holy crud, Jess! Poor IZEY!
And, well maybe in that Envoy is a man named ELEG and he's from North Carolina... Gah, Jess! Why you gotta be so judgmental!? HAHA... so I saw a license plate that read YBNRML... to me a few minutes to figure that one out! Definitely weird!
Now, about Kora! I feel so bad for her. Can you imagine the fear she had when they just drove off! You finally let her ride the bus and she prolly felt like it was all slipping away! Either that or she thought that she was being kidnapped! Poor Poor Kora! I think she deserves some Maraschino Cherries!
Well, rest up Jessica! You should feel just fine by tomorrow!

I'm glad you got to the doctor and got drugs. You had this upper respiratory thing (pneumonia anyway....close enough for this non medical girl) earlier this year. I'm hoping it doesn't tear through the Lowe house this time.

Yeah for toothbrushes and showers!

Isaak looks almost as adorable in this picture as he does in his sidebar picture! You and your medical internet research....of course, keep us posted on the helmet situation.

Rest and feel better all the way!

I hope you don't mind that I found your blog, but I was desperate to see a picture of your beautiful baby boy! He is adorable! Hope you feel better!