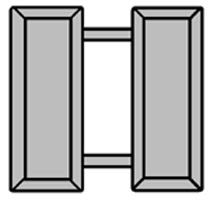 Congratulations to my Lover, who was promoted to Captain today! They had a promotion ceremony today that me and the kids went to. It was really nice. From what I've heard, the previous Captain promotion was really thrown together and not organized like it should have been. Alvis took the initiative and made this one REALLY good for Austin and Candelario (who was also promoted) by organizing the whole thing. What a great guy. Pictures are to come. I left my camera in Austin's barracks by accident but Booker (another Marine), took lots of pictures of the whole thing and he's going to make me a CD of all the shots. Kora and Jake pinned Austin's bars on him and they did a fantastic job! They felt very important, of course. It was really neat to see all of his friends in his platoon salute him afterwards, I was very proud!

I love you Captain Lowe!!
Posted by Jessica the Jacked LDS at 2:58 PM

Congratulations! Hey how did school go?

That is so awesome! He deserves it, he has put a lot of work into this and it's nice to get the respect that goes with that rank! Give him our best!

My uncle is in the military, and I remember whenever he earned a new rank, it was a big deal.

Over here, in boring land, we salute you.

what's with that image? does that mean captain or something? Yay for Austin!!!! Way to kick butt!

Congrats Austin! And to you too Jessica! Very exciting.

I can imagine that Jake's smile was from EAR to EAR!

Speaking of his ears....what's the next step?

Congrats!! That is so awesome. I bet his kids are SO PROUD of him!