My HOT Marine...(and some other boys)

Austin's friend Maher (I only know all the boys by their last names cuz that's what Austin calls them, sorry) takes pictures of all the boys and puts them on his Mac album. Austin downloaded all HIS pictures from there to keep since he sucks at taking pictures. Thank GOODNESS there's ONE picture taker there. Austin hasn't taken a SINGLE picture since being there even though I got him his very own camera. Fool.
Doesn't he look super hot in this picture all manly and Marine-ish? He looks like he's out to save the world. Or maybe just eat a really big cheeseburger or something. 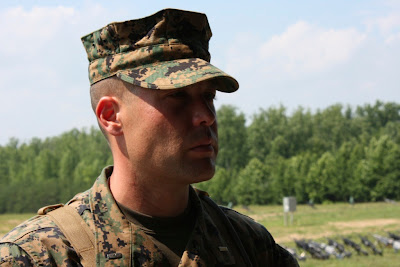 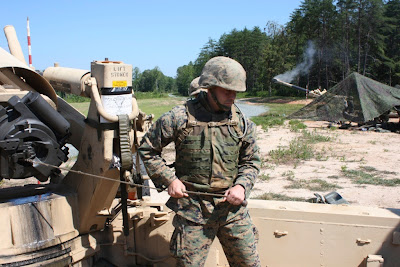 Here he is with a LIVE GORILLA he found in the woods. These gorillas are SO used to human contact that they actually come OUT of the forest with the Marines and pose for pictures. Crazy huh? 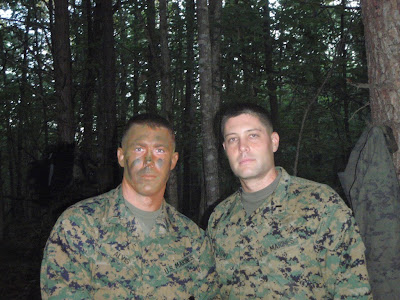 One night they had some parade and got to play dress up in their fancy clothes. Austin loves dress up...and so do I. Doesn't he look shiny? 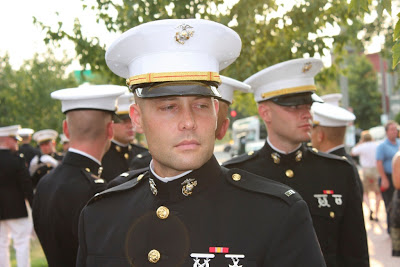 More dress up pics...this particular picture is a good example of what I call Austin's "lying face." I always know when he's lying through his facial expression. Amazing how it was captured here. I wonder what he's lying about? 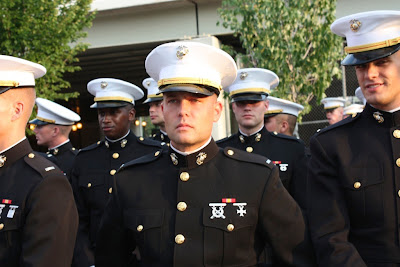 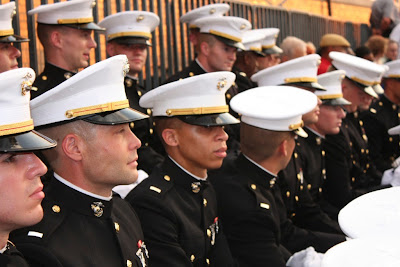 Here's Austin with his saw gun. It's supposedly like majorly heavy and he had to carry it almost 300 miles or something. What a whiner...I could carry that baby around the mall 10 times with 4 other LIVE babies hanging on every limb. Loser. 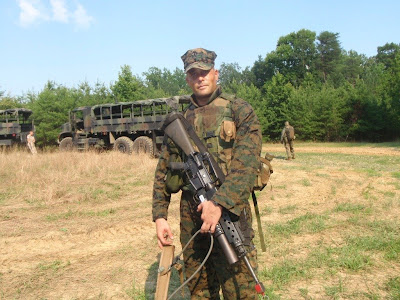 Is it just me or is that other boy's name BARFY? Poor guy. Look closely and correct me if I'm wrong.
Okay nevermind, I just blew the picture up and saw it was BAILEY. Funny though. 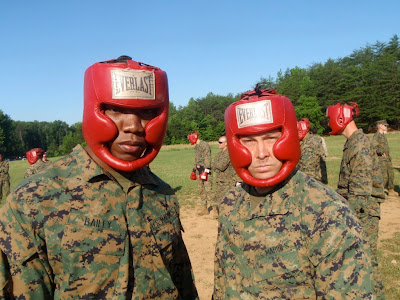 So this is Alvis. This young man has taken the liberty of telling all the other boys that Austin's wife is HOT based on Isaak's birth video he saw (Remember the one with my legs hiked up and spread open? Yeah that one.) Anyways, a complete and total LIE. Because of this, Austin has refused to take me anywhere NEAR the boys in order to keep this fake facade running. Therefore, I haven't been introduced to a single ONE of the friends he always talks about. He keeps me locked in a closet here in Fredericksburg and I'm only allowed to come out to buy groceries or bathe. It's really quite annoying. Thanks a lot ALVIS. 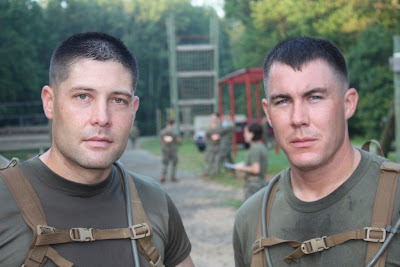 This is Austin wishing he was a cop in his cop looking safety goggles. The grenade in his hand is just for effect. 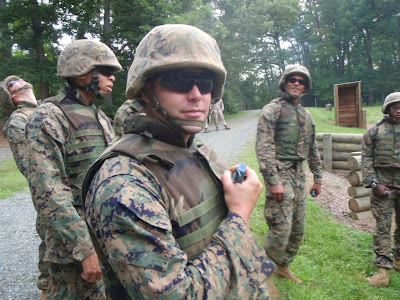 Yes lover, we all know you're buff. You don't have to flex your guns in EVERY picture. 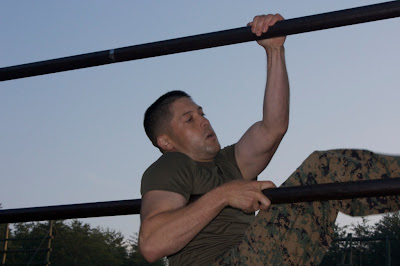 I bet you didn't know that in their spare time, the boys model. Here's Austin and Candelario doing an over the shoulder. I think they are visiting the "Derek Zoolander Center For Kids Who Can't Read Good And Wanna Learn To Do Other Stuff Good Too." Honestly, I didn't know it was in Virginia...I'm gonna have to take the kids there before school starts. 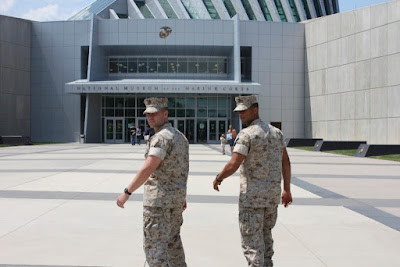 Posted by Jessica the Jacked LDS at 7:02 PM

Austin just looks way to serious for me. Since you guys lived with us and I got to see a different side of Austin that is a little silly I just can't take him that serious. Does he ever let that side show for any of the guys at camp? Love You! Dad
He does look really good in his dress up uniform.

I think he is keeping you away from his buddies because he doesn't want them oogling you.

LOL, I'm so glad you're back to add laughter to my life.

Marines are not supposed to have any emotion on duty....... unless it's issued. :) I'm glad to see him crack a smile, (or a hint of one), in two of the pictures, what a rebel! I have to say, I love my life now, but I miss ironing those uniforms and seeing my,(in-shape), husband come home in his BDUs. There is a lot of pride with the uniform, for what it represents, and I kinda miss that. Way to go Austin!

I wouldn't want to run into Austin in a dark alley, especially in that uniform. He looks like he could do some damage. And, seriously, he drank gun powder? Doesn't that have all kinds of bad stuff in it? Do you have a picture of the drinking of it? You also got me when you said he was w/ a "live gorilla" i got so excited (and kind of scared) and then scrolled to see it. Nice one. I'm very gullible.

And, I love Alvis for saying that. Don't you love hearing those words? Of all times during birthing pictures? (I'm serious...but it's sort of not fair b/c your pictures were amazing). How did you stay looking so hot? Did you reapply make up through out the day? Or was that the first batch you put on? I think you should make Alvis cookies.

Those pictures, and the comments were fun! :)

Make Alvis cookies? What's wrong with you people? Now I have this mega fabulous image built that I have to live up to and keep in mind I JUST had a baby. I'm looking very FAR from "hot". I could take a picture of myself nude to prove this point but I'll spare you ALL the disgust. This Alvis character is gonna loose his credibility pretty fast as soon as one of the boys meets me. Making him cookies might only encourage him to make more mistakes like this in the future. Not a wise choice for a big bad Marine.

One more thing. This Alvis has "seen war" as he calls it. I think being in Iraq has caused his brain to malfunction and his judgement is now a little wack.

okay honestly... that building even looks like the MODEL they used in zoolander of "the center for kids..blah blah blah" I remember. Also... in that second to last picture... i'm having flashbacks of that retarded boy who grabbed my arm really hard. look at him... he looks retarded... ha. but he makes up for it for looking hot in every other picture. good job austin. As for his lying face, i think he's lying about how tough he is.

What IS your problem? Is your mirror broke [sic]? Alvis obviously has a gimlet eye and discerning taste. You ARE hot. I neglected to tell you that when Charles and his son Charles were driving back to Mineola following our wedding, he looked at his dad and said: "Dad, I think I just met the most beautiful woman I have ever or will ever see. I CANNOT believe she has three children." And, you were barefoot, as I recall. Yes, luv, you are breathtaking, but Austin's not sa' bad either, eh? Love a man in uniform. Think I'll ask Charles to model his Colonel's dress uniform. Mmmm.

If Austin looks retarded in ANY of the pictures I'd have to vote for the one posing with BARFY.

Pretty cool pictures of "Army Guys" as Raymond puts it.

Looking mighty fine, except when they look retarded.

i am here... lovin yhe posts but only have my left hand at the moment!

u r hot girl...you looked great at the birth.....if you wanted to look bad u had to do ur birth like mine! lol!