Junkety Junk in my pocket (you thought I was gonna say trunk, huh?)

1. Toy Jail. This is something we created a few years back and now that we are in our own place and we're dealing with messes everywhere and everyday, we are implementing it once again. Let me tell you about it. SO we have this huge laundry basket downstairs. It's called Toy Jail. If the kids leave their junk downstairs the entire day and don't pick it up, I throw it in Toy Jail. I don't care what their rooms look like during the week, we clean those once a week so no biggie. BUT, the downstairs drives me NUTS when there's crap everywhere. If you stuff gets in toy jail and you want it back, you gotta pay me 15 cents for it. If it sits in toy jail for over a week, it gets trashed. If it's something MOM bought like shoes or clothes that I don't wanna throw away, then after a week, you gotta pay ME the amount I spent on it even if you don't want it back. Nice. Lovin it. My downstairs stays fairly mess free almost all day long because either they don't wanna loose it so they don't forget to take it back up, OR I throw it in Toy Jail and I don't have to look at it anymore. 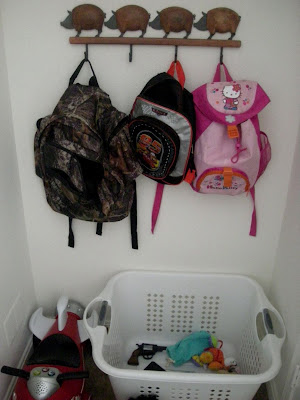 2. Had another fun day with my new friend Bonnie. Yesterday our hubbies weren't coming home so I hung out over at her place all day. No REALLY, all day like 11am - 8:30pm. I was totally sick of her but she wouldn't let me go until then *wink* Our kids got along SO well it was amazing. She even fed us dinner which was totally nice except it was goulash and I hate goulash. My mom used to make me eat it and I would have to sit at the table for HOURS (no joke) and wait until it was gone LONG after everyone else had finished and gotten up. (yes mother I'm putting that in my book about how terrible of a mother you were, don't worry you don't have to tell me, hah!) Nah...the goulash wasn't that bad, it was actually pretty good! I'm just glad she fed us.

3. So I STILL don't have a picture of her but I will, I promise. I could've gotten one while there but I didn't want her to feel bad about not having makeup on. Not that it would have made a big difference. She looks exactly the same without makeup, totally cute! But you know how when you don't have makeup on you feel yucky and...well...I DO. I wouldn't want someone to take my picture. But that's different because without makeup I feel like I disappear. Bonnie, on the other, doesn't. SO whatever. The POINT of this number is that I thought it would be funny to take the two Jessicas' pictures and morph them into ONE to show you what Bonnie looks like. Obviously, it wouldn't look like her, but it'd be funny. Couldn't find a good site that would do it for free but I DID find a fun site to show you what you and your partner's baby would look like. I did it with THIS picture of me and Austin... 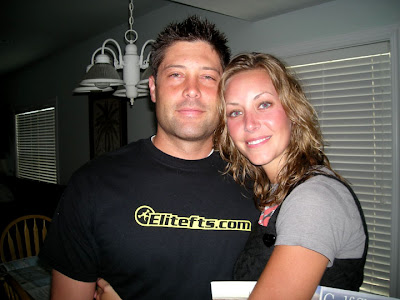 And THIS is what they say our baby will look like. Hmm..not so much. They got the hair color right on but the rest doesn't look like our spawn. It's possible, but I guess we didn't use the same ingredients this website used to make this un-named child. It was fun though...go try it out HERE! 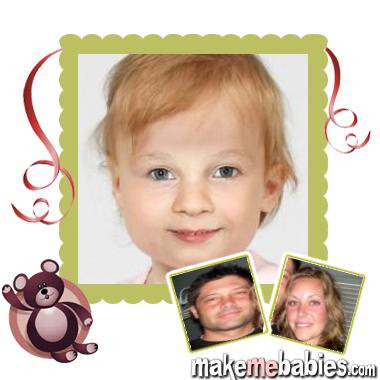 4. I DID however, manage to get pics of Bonnie's sweet kids, well two of them. She has one more adorable little woman named Emelyn (sp?) who is almost 1 yr and she has fabulous red hair!!! This is Jake and Cooper. He's a whole year younger than Jake and whole HEAD shorter. A TOTAL sweetie. I think Jake and Cooper look very similar with the big lips, hair color, eyes, freckles. It's crazy! 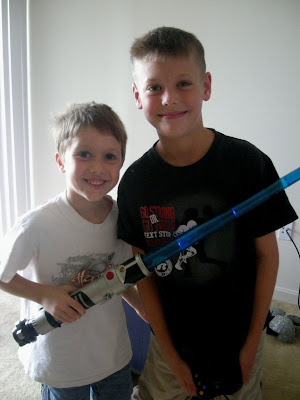 And THESE are the crazy girlies, Kora and Ashlyn. They're the same age and have a blast together. They had been playing in Ashlyn's makeup (aka, Bonnie's old crap) and this was the finished product. Kora had never used base before so this was super fun for her. She looked so...blank. It reminded me of dead people in their caskets who have on SO much makeup that it blends in with their hair and they just look fake. Sorry for that comparison, I know it's vulgar, but it's true. 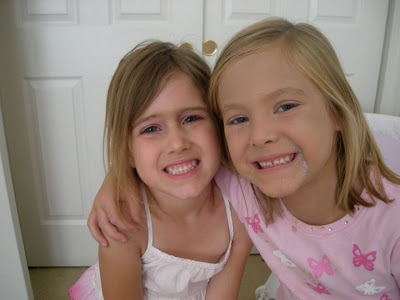 5. I cleaned house today. No fun. I hate cleaning. It sucks. It took me literally the ENTIRE day because I'm so ADD and I get sidetracked so many times. I hate cleaning toilets and especially with 3 potty trained boys (yes that includes Austin) who like to spray their urine all over the entire toilet. WHY?! All you gotta do is hold it and aim it. Instead, they are too dang lazy to HOLD it with their hand so they just dangle it and move their hips around to aim. Not working out cuz the first blast is always in the wrong direction and it sprays all over the seat. Even worse, do they wipe it off? Heck no, might as well just let it SIT there and caramelize all over the rim so Mom can just scrub pee stains. Nasty I tell you.

5. Update on the Izey thick bottle. We (Bonnie and I) called Enfamil and they told us that in this situation they usually suggest giving the baby water to equal the amount of extra formula. Well, that would be like 16oz of water...not gonna work. I can barely drink 16 oz of water in one day. So I've been giving him bottles that are a little watered down to flush out all that formula that's just sittin in his belly. I know it's been upsetting his stomach a little cuz he's a bit more fussy than usual and he's been havin acidy poos instead of terdballs. I've already noticed a difference and I think with one more day of watered down bottles he should be back in business. 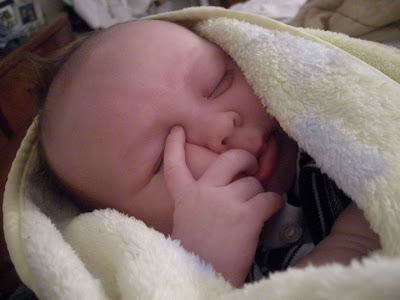 6. Just a cute pic of Jake and Izey watchin TV together. 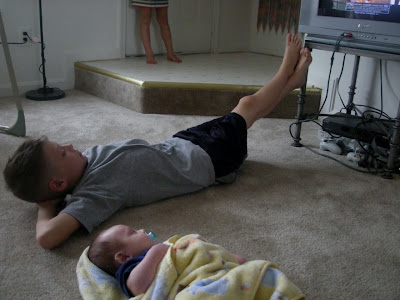 7. And another of the brothers lookin at the mothers. 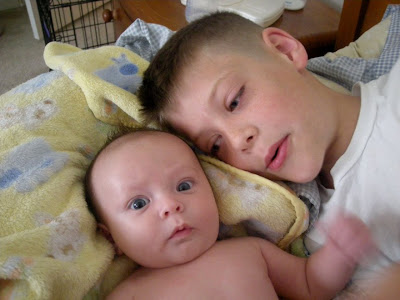 8. And then this ADORABLE video of Koko helpin mom. While I was trying to clean, Izey was crying and crying on the bed so Kora came in and just helped herself to picking him up and rocking him to sleep. SOOO PRECIOUS!! He loves his little momma!

Posted by Jessica the Jacked LDS at 4:42 PM

I love the toy jail idea. I think I might have to start that one in our house. I just want to growl every time I see toys strewn all over my house and they just sit and sit there.

So, I really appreciate you for not taking my picture. But I do love the pics of all the kiddos playing. I told Dave how well they got along and he was impressed. That's a lot of children running around and the odds were against us, but we pulled through gracefully. Anyway, I kinda liked your computer spawn... you guys even have cute make-believe kids... amazing!

ok. now i know you are way more laid back than me--in a good, cool mom way 1) you let the girls play with liquid makeup, well, any makeup at all 2) you did't freak with kora rocking all around with isaak. I practically jumped into the computer screen three times trying to hold his neck as his head bobbled around.

oh, and jeremy WAS totally pissed when he looked up and saw me taking that picture FOR YOU of him getting drenched. enjoy.

I think I'm gonna implement toy jail! I will however need a dumpster the first week or so with all the junk that gets all over the house. I miss my baby papazan, it was definitely my favorite baby item ever, I even liked the music which is very unusual for me.

Your blog is always great! I love the video of Kora rocking the baby. Too sweet. Aren't kids the best?!

Okay-I used to love goulash when we first got married. But John complained all the time about it, so I haven't made it for like 6 years. The sound of it now makes my stomach start to do the jiggly salmon flop...

that video of kora and izey is so sweet. she's so quiet and calm. It's really tender. I love it. did i mention i love it? i think so. i like Bonnie's kids.. .they are WAY cute. i can't wait to see who they came out of. haha. that's all... lucky you finding a friend... it's more than i have anyway.

Toy jail is a lot like the real thing. You must be familiar.

Kora is so sweet with Isaak. This must be what the Jolie-Pitt house looks like. Do they have a blog?

I think you have a crush on Bonnie. I'm a little jealous. I should try to make friends too.

Kora is GREAT! P does the same thing except I won't let him pick Liam up on his own!

Love the toy time out!

Oh yeah I am glad to hear that Izzy does actually CRY! I was getting bitter over here!

Here she is the MUTHA!!! stop hurting my feelings about the casseroles and how terrible of a mother i was. Not fair! I love you very much and i have decide that I will write a book about you kids and tell everyone how precious you were so everyone will believe me and not you. Someday your children will say things about you and you will see how sometimes those things hurt feelings of mothers because we are tender hearted. Love you dearly
MUTHA

Oh and one more thing, I loved!!!!!!!!!!!!! the picture of my Jakob and Isaak watching tv and also the little side pic of Isaak and bottle and fancy shades. It cheers me up totally.

Oh and one more thing....this is for your friend Bonnie. I really am not the evil mother and terrible cook that my daughter, Jessica, your friend says that I am. I am actually a nice person. She has a brain disease that is incuraaaaaaable.

My Koko is the best mommy. I miss her too much along with the rest of the short people that you have birthed and even the one you did not birth who used to eat "Egg scramiches" with me each morning.

This post has 15 comments. What are you, Perez Hilton now? ;)

We do toy-time-out, with the same process. I will have to think about adding fines into the equation once they get old enough to give a crap.

Your kids are too cute.