Baby Shower and a Toothless Face

On Saturday my totally cool and sweet friend Natalie threw me a precious little shower at a nearby Mexican food restaurant. It was SOO incredibly nice of her and she did SO much and spent WAY too much money!! She made me a beautiful diaper cake that I'm kicking myself in the butt for cuz I didn't get a picture of it before Kora insisted on taking it apart. It was so cute. She also had delicious almond flavored (my fav!) cupcakes made from a bakery here in Rockwall. It was a small gathering. My mom was supposed to work that day but she arranged to be off and I'm glad she did. She was the only person from my side of the family that showed so I'm glad I had her support. A few friends from church and of course Kim was there and Natalie's mom and daughter. I was a little disappointed that not more of my family came. I know a big handful of them had to work which I totally understand, but there were lots of others who gave no excuse for not being there. (*cough* Lindsay *cough*) I guess when it's your 4th child people just don't care anymore? Oh well.
Kora had a blast being my helper and opening all my presents for me. She and Kamryn had fun together being silly. Natalie was a SUPERB hostess and I can't thank her enough. It really meant SO much to me to have her do that. 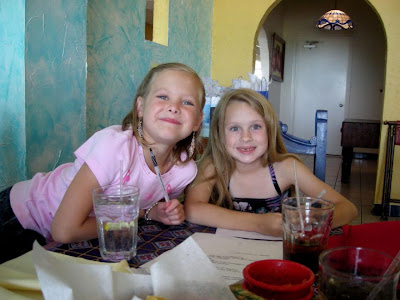 Later that day Jake had Evan over to go fishing with him, Pawpaw, and Kora. They all caught at least one and had a great time. To cool down, Pawpaw set up the big water slide and let the kids go crazy. Barrett from next door even came over and got in on the fun. While they were being rowdy boys, Jake ended up getting Barrett's knee in his mouth knocking his tooth even MORE loose than it was. Jake's had this tooth loose for what feels like a year and he would NOT touch it. He wouldn't wiggle it or move it from side to side or anything. He hates pain so he's not my child because I remember LOVING the pain from my loose teeth.
I loved making my eyes water and even now I sometimes catch myself loosening my already big teeth just for the pain.
Since it was so loose at that point, Jake told Pawpaw to just "rip it out" and so...
that's exactly what he did! This is a big deal because this is Jake's very FIRST tooth for him to loose ON HIS OWN. He had his bottom two teeth pulled because the new ones were already growing in behind them so that doesn't count as losing them! I know he's making a silly face here, but it's because I told him to do that. You couldn't see the gap good enough with his regular smile so I had him keep his mouth open. As you can see, the new tooth is already through the gums, that's how long we've been dealing with this loose booger. I think his toothless smile makes him look even MORE cute, if that's even possible! He just has a pretty face with those freckles, big blue eyes, long eyelashes and big lips. What a cutie! 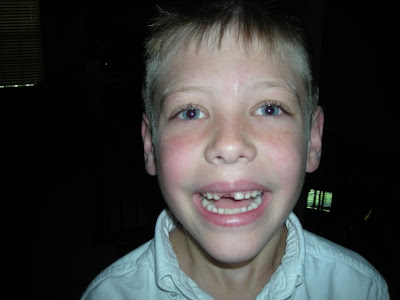 Posted by Jessica the Jacked LDS at 4:54 PM

I wish I could have been there. I was planning on it but Todd had to work all day so I was on kiddo duty. I do have something for you that I'll bring one of these Sundays.

How sweet of your friend:) Jake is a cutie:)

So what did you get so I won't duplicate it with my present?

I'm so glad to hear Jake had to get 2 teeth pulled and hasn't lost another until now. I'm dealing with the same thing with #2 it's good to know it's not just her, he looks very cute, #1 thinks so too :).

How fun! Jake and Kora are mega cute!

Excuse me...when do I not have a wedding scheduled on a Saturday in May...duh...quit your belly aching!! OK, your prego, thats your only excuse!!

Yum. Mexican food. And, I know exactly what you mean about making your eyes water, and even messing with your adult teeth. I think sometimes, now, I grind mine at night and it makes them lose..the entire next day i'm pushing on it to feel the pain. Then I realize I need these puppies to stay in my mouth and force myself to leave them alone. I thought I was sick, at least i'm not alone. :) BUT, YAY Jake for losing his first official tooth. I can't wait to hear about the Tooth Fairy. I loved her.

Jakob IS adorable... but i have to say.. in that particular picture you made him look like an alien with the (what appears to be a fish eye lens) and the goofy grin. Way to go Jake!!! I hope the tooth fairy brings you lots of money! :)

Lindsay should have been there. She went 800 miles to Mica's wedding. I don't see the difference.

Glad you had a shower. I know so many who do not get showers on their third, 4th, 5th, etc because people think they already have everything. But no one realizes you still need things for each child, seasons are different for clothes, etc. And it's so fun to get together with girlfriends and let everyone fuss all over you. :)

The stuff I'm dealing with is just normal life changes. I am just having a wimpy mom moment, (or few days), where I am just a little tired of big change, and this one that might be coming up is bitter-sweet. (Get baby out of your head cause Bill is fixed) Bill wants to wait till we know more before I announce stuff. I'll let you know. :)