After the Heartfelt Cafe the kids had their party and exchanged their Valentine cards. Jake gave his girlfriend Makenzie the rose and princess candy box he had for her. She was SO surprised and all the other girls who were watching went, "awwwwww!" It was very tender. Makenzie's mom and dad were there so it was kind of neat to see them be excited for her too. The funny thing is the entire day I was there (aside from when he gave her the gifts), Jakob and Makenzie never spoke a word to each other, sat near each other or even LOOKED at each other. The did absolutely nothing that would constitute a relationship. I like it that way and I'm going to enjoy that for as long as I can! *wink* Here's a picture of cute couple... 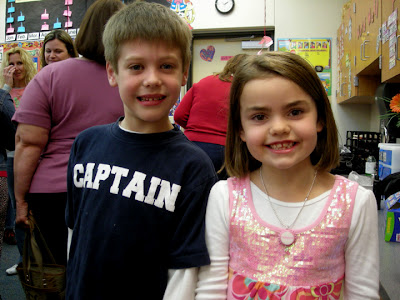 This is Jake's teacher Mrs. Garrison whom he loves! She's very sweet and does so much for the class. I had to get a picture of them because this was the last party I'll be at before we more :(
(btw, don't you like Jake's forced smile in all
of these pictures? it's so fake it looks
like he's uncomfortable...poor boy.) 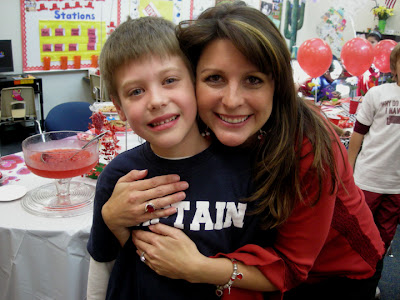 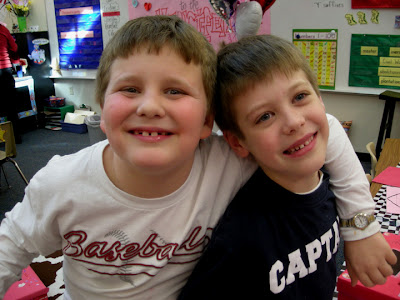 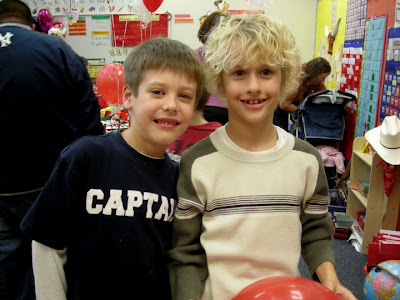 For dinner on V-Day night, I made eggrolls for Jake. They're his absolute favorite dinner and I promised him I'd make them on this special day. Kora helped out and made her own concoction with cabbage, mushrooms, salt, pepper and even chocolate.
*mmmmmmmmmm* 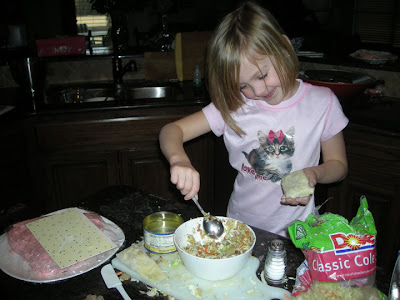 When Austin came home he was lookin' SMOKIN' hot in his dress blue pants and khaki dress shirt Marine outfit. He made my V-Day tradition, chocolate dipped strawberries. I love these so much because I don't have to share them with ANYONE!! 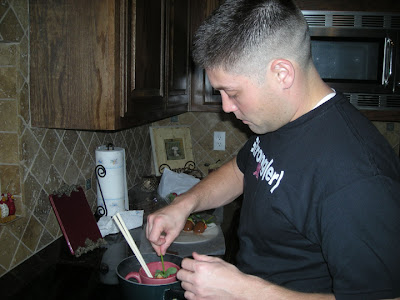 He also brought me some beautiful roses that we can't afford... 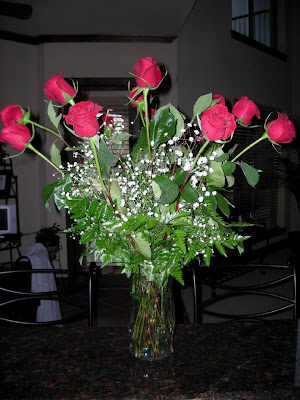 ...and two special roses for Kora or she would have killed him. 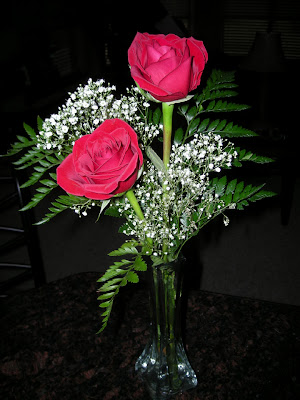 I love you Micheal Austin!!
Happy Valentines!
Posted by Jessica the Jacked LDS at 4:13 PM

AWE!!!! SO precious! What a sweet family you have! I need to do my V-day post tonight...

I love these! especially jake with his girlfriend. She's so aDORABLE... nice flowers... wish i had gotten them... but i was in the airport all day. :(