A list of junk because I've been in a little funk.

1. I apologize for not posting anything in a while. I know I have blog stalkers that refresh my blog every 30 minutes and are completely and totally depressed when they don't see anything new. Forgive me.

2. Funny thing - My massage therapist and I were talking about an incident that happened to her. She was at Chick-Fil-A and a lady confronted her. She thought Jana (my massage therapist) had been rude to her kids when actually that LADY'S kids were being rude to Jana's daughter. Jana said something to me that I think is one of the funniest quotes I've ever heard. I couldn't stop laughing. Now first picture Jana, she's a really tall tough girl. She's got her eyebrow pierced and she doesn't mess around, she's really blunt and no nonsense, I love it! Anyway, this is what she said, "If I wasn't already on probation for assault, I would have kicked that woman's ass!" It was hilarious, so ironic! Love her, she's always saying things to make me laugh!

3. I went to my cousin's house today to teach her how to do the Princess Parties. She's doing a couple for me this month because my usual girl wasn't able to work that weekend. I can't wait to hear how it went. She looked great in the wig and I KNOW she's going do fabulous with the program. She's a school teacher (or was) and already has great talent dealing with little people.

4. I have a weekend getaway planned this week with Austin!! I can't wait. We're going to a hotel in downtown Dallas for two nights to celebrate our anniversary that we didn't celebrate in January. My parent's are keeping the kids during that time and it's going to be SO WONDERFUL! I have NEVER been without a single kid for that long, crazy I know. It's going to be a much needed break.

5. OHH, my Swedish massage I was supposed to have on Tuesday got canceled. The building the place is in lost ALL power for the whole day. The entire block was shut down because they were working on the telephone poles. This type of thing would ONLY happen to me. I have the weirdest luck.

6. Speaking of luck...I've had a lady bug in my car for the past week or so. I keep finding it crawling on the windshield INSIDE my car. Feeling sorry for it, I open the window for it to fly outside. The funny thing is, it keeps RE appearing back IN my car. I have no idea how it gets back inside. In the Canada and the U.S. it is said that if a Ladybug lands on you and then flies away on its own it is good luck. SOOOO, does this mean I have BAD luck in my future because it keeps stalking me and WON'T fly away on it's own? Let's hope not. I've been enjoying it's company in the car but I can do without more bad luck. 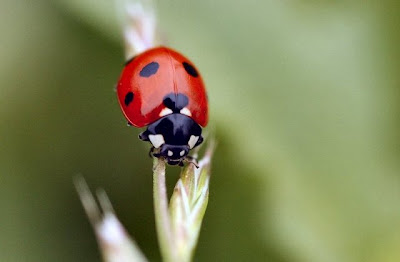 7. Austin's been getting all his new Marine stuff lately and so our room has turned into a fashion runway. Once he gets something new, he has to try it on and then prance around like a bright and shiny, freshly cleaned pony who just got it's tail braided. Right now he's sizing his new "cover" or as I call it a hat. Kora was watching him and asking him all these questions about it and then asked him, "Dad? Do you wanna wear my pink badge?" It was cute. She got this breast cancer pin from Jake for Christmas. He didn't know what it meant, he just thought she would like all the diamonds and sparkle on it. Maybe dad will too?
8. I LOVE LOVE LOVE the new Jonas Brothers song, "When you look me in the eyes." If you haven't heard it yet, go enjoy... http://youtube.com/watch?v=-ZBoPlCzuRY The only thing I don't understand is why they wear such TIGHT pants?? I know it's the style right now and me NOT liking it probably just means I'm getting old, but come on...it's not attractive. The poor boys are gonna have problems later on if they don't loosen up...literally.
9. Lindsay this one is for you. This dude on Disney sings these funny songs all the time, but he's the craziest lookin man ever. Every time I see him I think of Levi as an older man. Tell me what you think. The best song is "Do the dance" but I can't find it anywhere. Do a youtube on him and a google image search and listen to his stuff, it's weird but addicting to me.
10. I'm out.
Posted by Jessica the Jacked LDS at 3:25 PM

I am glad you posted:) Are you getting so excited to find out the sex???!!! It's Monday isn't it? DO you have any feelings one way or another?

Ummm - I'm JEALOUS! A WHOLE weekend alone with your man? Wow. I'd love that, but Lola is a boob lover and we can't be seperated for very long. Maybe soon, though, our anniversary is in March. Here's hoping!

ps. you are getting old. I wouldn't have thought twice about their pants.

Great JB song. We were listening to Radio Disney the other day and Addison goes, "Mommy! It's da Joda Bwudahs!!" It was the first time she'd said that and it was so cute.

I hope you have a marvelous anniversary trip!! :)