Oh my gosh oh my gosh, where do I begin?! This is my most favorite time of the entire YEAR! I LOVE October because it's the home to me and Austin's birthdays, the state fair, my favorite holiday Halloween, and great weather! I love the fresh smell of October, it's so reviving and exciting to me. Wednesday was Rockwall Fair Day so we all went to the Fair and had a grand ole time. It was interesting because Kora who needs stimulation 24/7 LOVED every minute of being there. She didn't whine at ALL because there was so much to do and see and ride. She never once asked to ride on the stroller and usually she's always complaining and her legs being tired and junk like that. Miah, on the other hand was a little overwhelmed with all the stimulation. He liked his little spot in the stroller and only wanted to get out for just a few special things he saw. And then there was Jake, who was sick and Austin who hates the fair but knows how much I love it so he goes anyway.
Here's Big Tex! "Howdy Folks, welcome to The State Fair of Texas!" 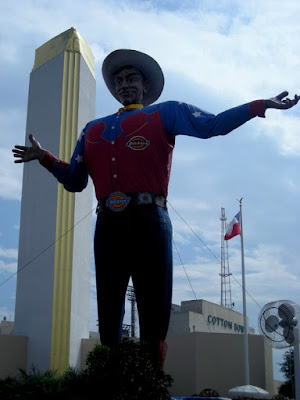 Isn't this precious?! This is when we first arrived and they were both so into everything around them, but continued to hold hands. 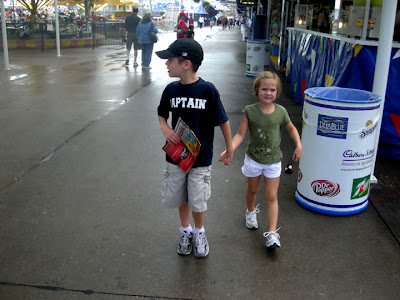 We met Mimi and her kids, Aunt Marian and Charles, and My parents there and our first stop was to get a corny dog, of course! What a nice way to start the day, by getting ketchup all over your shirt and face. 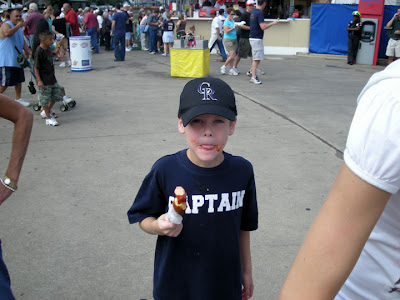 Kora loved the corny dog and was surprisingly a lot cleaner with it than her OLDER brother. 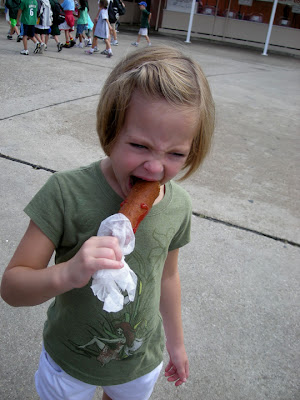 Next we visited the car shows. The kids were running around in this building like maniacs jumping in and out of cars to test them out. I'm sure the workers there loved my kids' grubby greasy corny dog fingers on all the new cars. 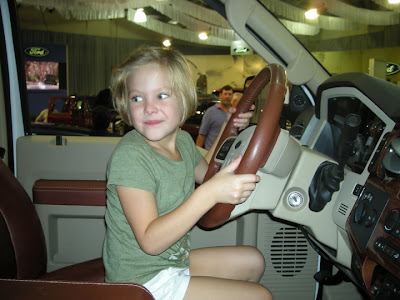 This is one of those special occasions when Miah needed to get out. He HAD to try out the big truck. 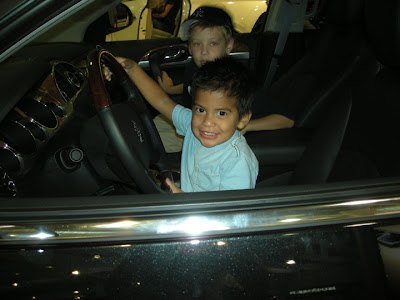 Okay so this car is a little cheesy, but it's Texan, I had to get this picture! 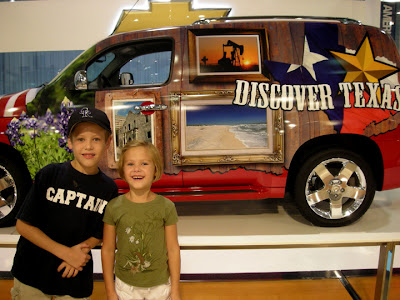 Aidan loved the car building too but I think it was because it was air conditioned. 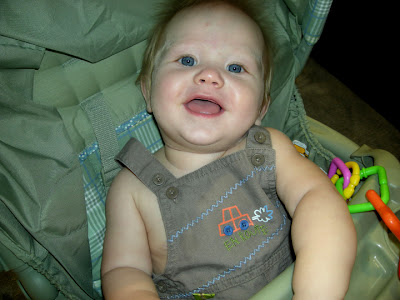 Isn't it nice when the older cousins get big enough to help keep an eye on the littler cousins?! 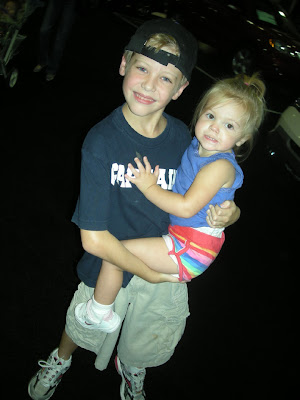 Here are some old people we found in the car building. 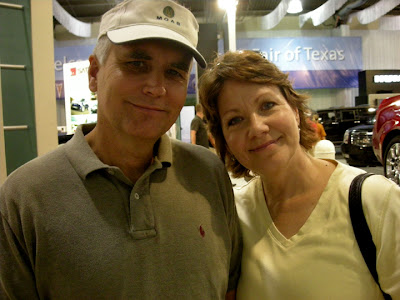 This robot was kinda cute because he carried on a conversation with Jake for about 5 minutes talking about baseball and junk. Jake felt kinda embarrassed talking to him and kept trying to walk away but he kept asking Jake more questions, it was cute. 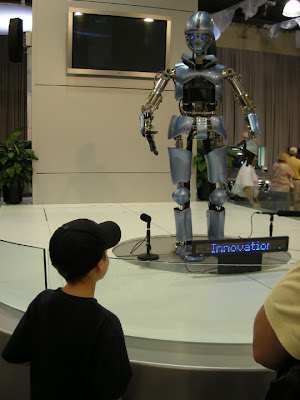 When we left the car buildings we were back outside in the heat and the kids needed a cool down. Jake decided to dip his head in the waterfalls to cool himself down. 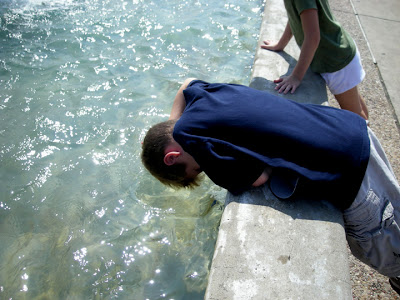 Then Kora decided to go at it. 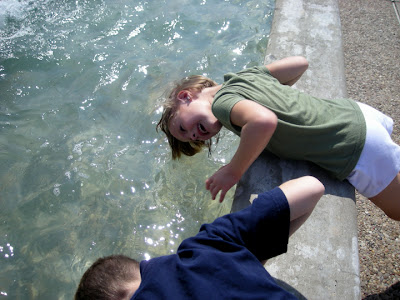 Even Miah THOUGHT about it, but didn't do it. 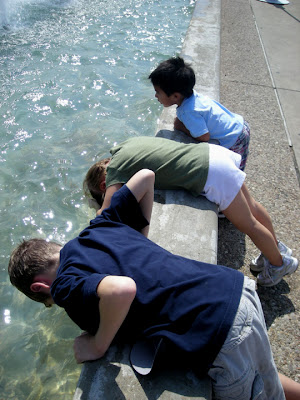 After our cool down, we were ready for some action and moved on to the midway to ride some rides. Jake was more brave than the others and took a little more risk when picking his rides. 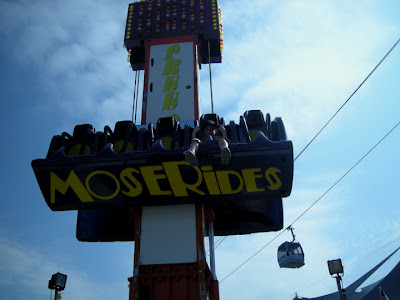 Miah and Lorlin stuck with the low to the ground easy does it rides, like the cars. 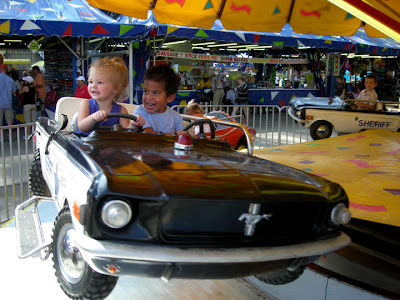 Kora loved the boats, she rides these every year. 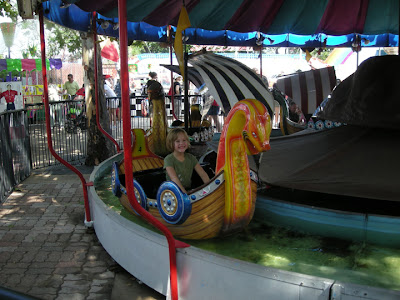 Even PawPaw got in on the action and rode the Lady Bug with Jake. It was pretty fast and by the end of the ride my sick Jake was lookin even sicker. 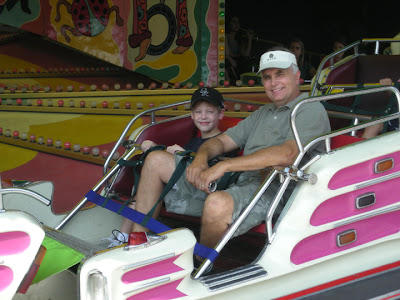 Austin even found something he could get into at the fair. The Cooperstown Hall of Fame Exhibit was there and he enjoyed walking through it. 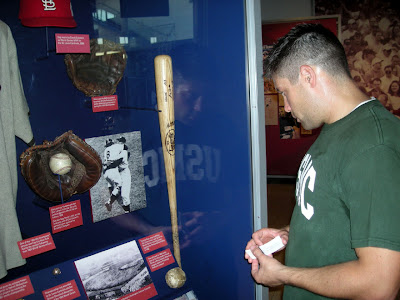 On the way to the fair, Lindsay told me to take pictures of weird people because there are always some pretty crazy people there. I found a lot of good options, but THIS lady topped the charts. It's like she new I was going to be looking for weird people and so she dressed accordingly to please me. Thank you motorized scooter lady with tinted sunglasses. 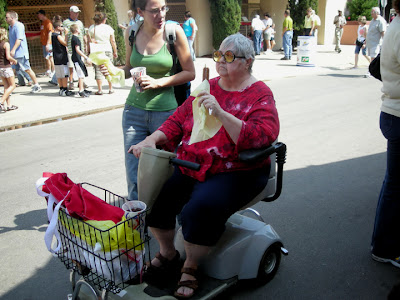 We did play a few games while we were there. Jake and Kora won 2 ridiculously small and crappily put together teddy bears for $10. Then Austin and Jake tried out the football throw. Amazingly, Jake got one in the hole and won a football. Austin on the other hand...not so lucky. 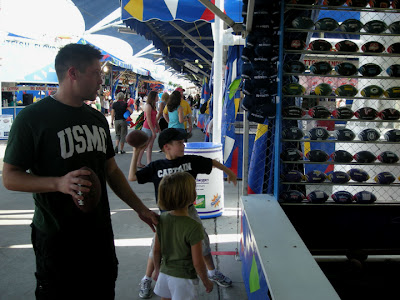 This is a picture of some cotton candy poop that someone dropped as they were walking. I took a picture of it because when Kora saw it she could NOT stop laughing at it. It was pretty funny. 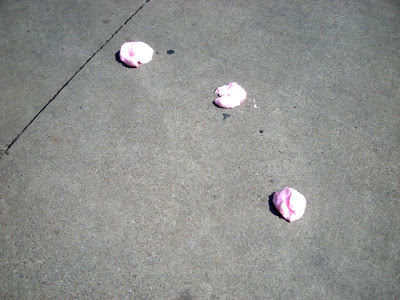 On the way home, everyone was tired and all of the grubs fell asleep but THIS picture is a rarity. Jake NEVER falls asleep in the car so I had to take a picture for proof that it happened. 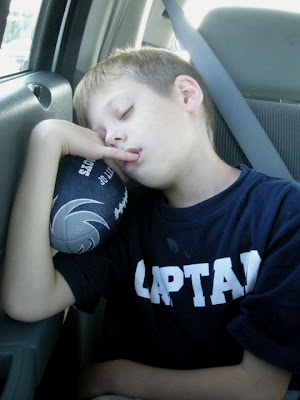 Posted by Jessica the Jacked LDS at 12:23 PM

Sounds like you had a great Time:) Loved all the pictures! I wrote about my fair issues on Amy's blog so I won't repeat it:)

OH MY GOSH!!! I WANT TO GO!!! You made me want to jump on a plane and head to Texas! (Josh calls it "TESK-GAS" and he really wants to go too!) I hope your parents stop by on sunday, I would love to see them, they are so cool! How fun is that to have your family so close! Good memories!

i felt like i was there... thanks for taking so many pictures!!! i love the old scooter lady... i'm gonna draw her and put her on my blog... she's PERFECT!!! loved all the details you wrote about the day, it made it really interesting to read. loved it.