Jake had a project for school where he had to decorate a pumpkin to reflect a story that he's been reading with all his after school reading homework. The books he has been bringing home are all Spiderman comic books so he decided to make his pumpkin into Peter Parker. Whats funny is that when he got the paperwork telling him what he had to do, he got all mad and said to me, "MOM...they are making us do homework that costs MONEY!!" It was cute, remember he's the money saver so he doesn't like to do anything that costs money, even if he's not the one paying for it.
Once Kora saw Jake working on his pumpkin, she decided to carve HER pumpkin she got from her field trip. This is the first year EVER that I let them carve their very own pumpkins themselves. I decided that they should do it and I was excited to see how they would turn out. They did everything from cutting out the top, cleaning out the inside, removing all the seeds and goo and then carving the faces. I seriously did not do a SINGLE thing with these pumpkins. The funny thing is, each of their pumpkins have SO much personality in them from the work they did. They both reflect so much about themselves it's unbelievable. These are the best pumpkins we have ever had because they say so much just by the way they were carved and by who carved them. They did a fantastic job. 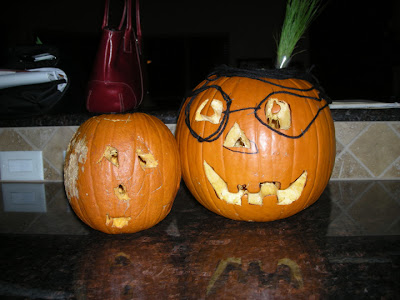 Posted by Jessica the Jacked LDS at 12:26 PM

i like how each of the pumpkins look like their carver...kora's pumpkin makes me laugh...it looks so sneakery. and jakes looks so friendly just like him. haha. love 'em.

I agree with Lindsay, they are really cute. It reminded me I need to get on the ball and get some pumpkins for my kids to carve! I love this tradition!

They did AWESOME! I can't believe you let Kora free with a knife when one hand is still out of commission! Lol!