Well, Friday was the homecoming game so I loaded up the whole family + pawpaw and we went to the game to cheer on the Yellowjackets!! I had fun, the place was PACKED and it looked so much different from when I was a yellowjacket. They added a whole new concession area, turf to the field and my favorite part was the cool new football player run through thingy. They blow up this huge big tunnel and then added a cool orange helmet to the front. It was really neat. Rowlett (the team we played) had one too, but it was only the tunnel, so ours was WAY cooler. The thing that was crazy to me was that EVERY SINGLE GIRL at the game, I'm talking students, looked exactly the same. They all wore the exact same style of clothes, had the exact same straightened hair parted to one side, the exact same thick makeup and dark eyeliner, same leather tan skin, etc. It was blah. At least when I was in school people had their own style and there were many different kinds, good AND bad. Now it's just like every girl is the same girl. CrAzY. Anyway, here's our family picture that pawpaw took for us. I told Kora to smile and not ruin the picture making a bad face BUT...that opposite thing I told you about happened. Oh well! 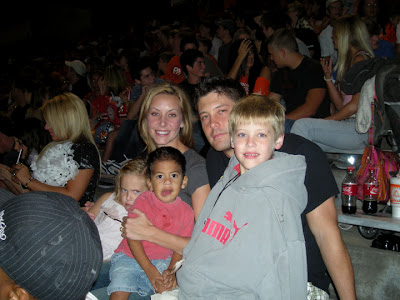 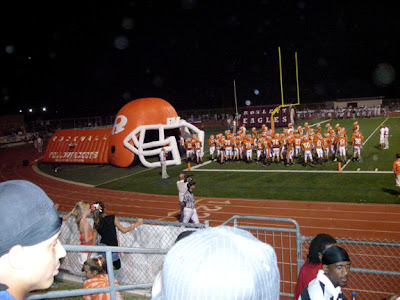 Posted by Jessica the Jacked LDS at 12:17 PM