The Accident and the Survivor

Here are some picture of a minor accident Miah had while cruisin on his favorite four wheeler. These are from a few weeks back, but I'm just now getting the pictures off my mom's camera. This happened one Saturday while I was Princessing and Austin was outside playing with the terds. Miah LOVES to buzz around in this electronic four wheeler and he does pretty well maneuvering it back and forth and all over. WELL, this particular day he got just a TINY but too close to the edge of the driveway and when one of his wheels went over the edge...well...the whole thing went down including HIM! Austin said it was so funny because he was still on the four wheeler down in the culvert all muddy and wet just crying. I know that doesn't sound funny but our family has this sick disease where we can't help but laugh at people when they trip or fall. You know you do it too so just hush!
Anyway, here are some pictures of the crash site and then the little survivor inside after he calmed down. He walked away from the crash without a single scratch (did I just rhyme?). 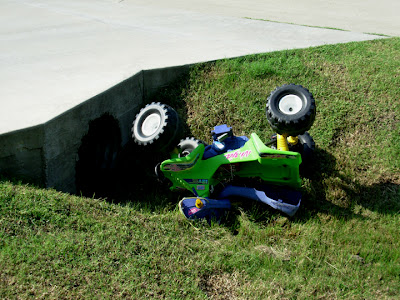 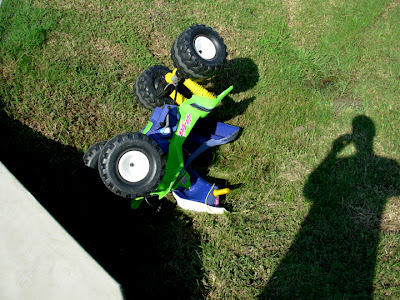 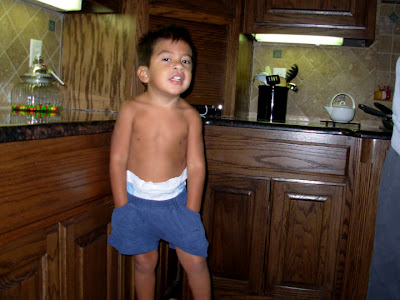 When Jake saw this picture he said he was jealous of the "squares" on Miah's tummy. Translation: Miah has abs.

BTW, no he's not that tall, he's standing on a stool.

Posted by Jessica the Jacked LDS at 9:53 PM

firstly... those pictures of the "wreck" look like real wreck pictures...HA..funny but kinda creepy.. also... you need to learn NOT to laugh at people when they get hurt...i seem to remember passing out after hitting a TREE with my bike and waking up to you and daddy hovering over me LAUGHING....it IS sick. and no i WON'T hush...but yes, i do it too. but it's still cruel...i love miah's abs...such a playa in that pose.